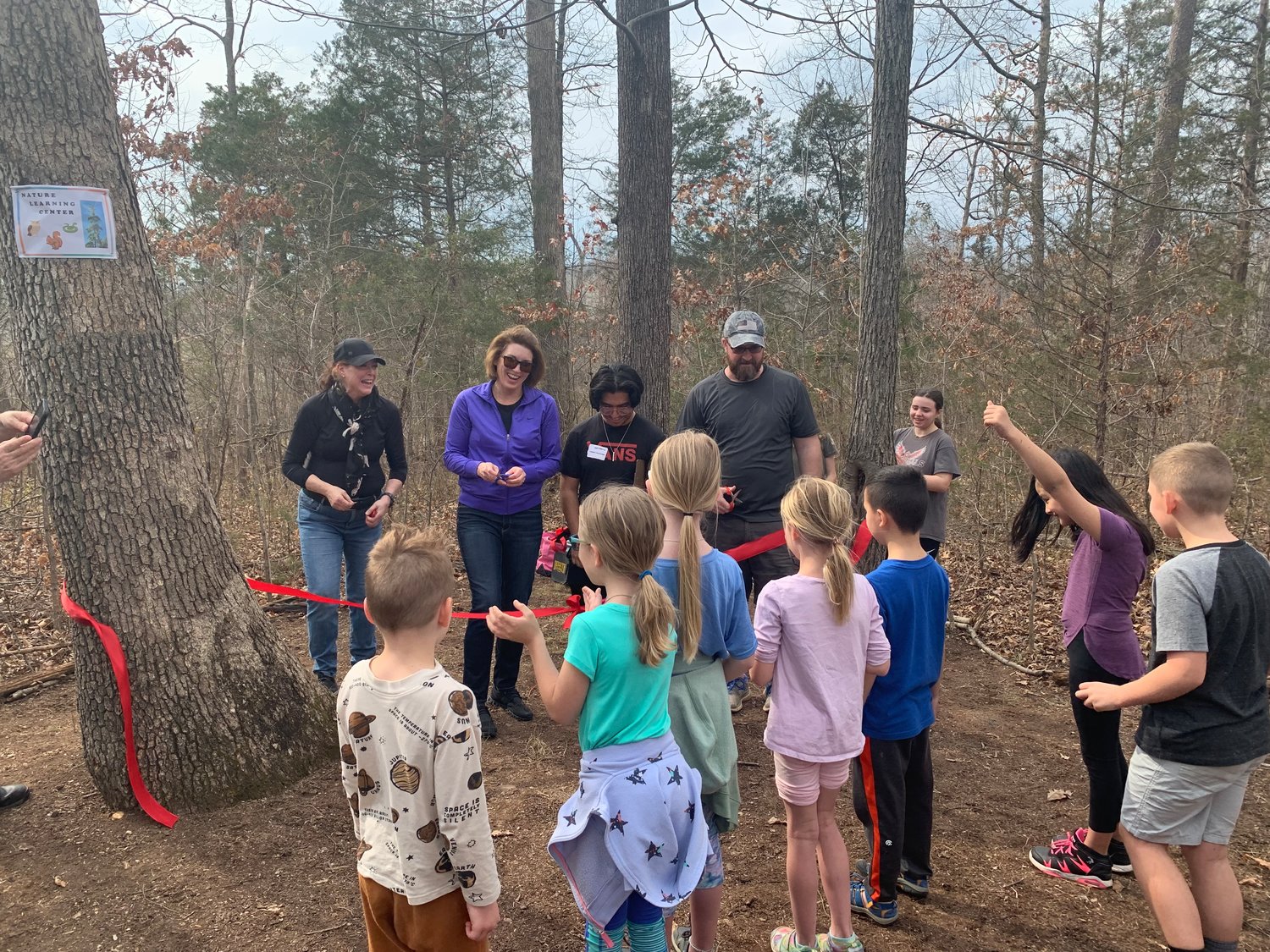 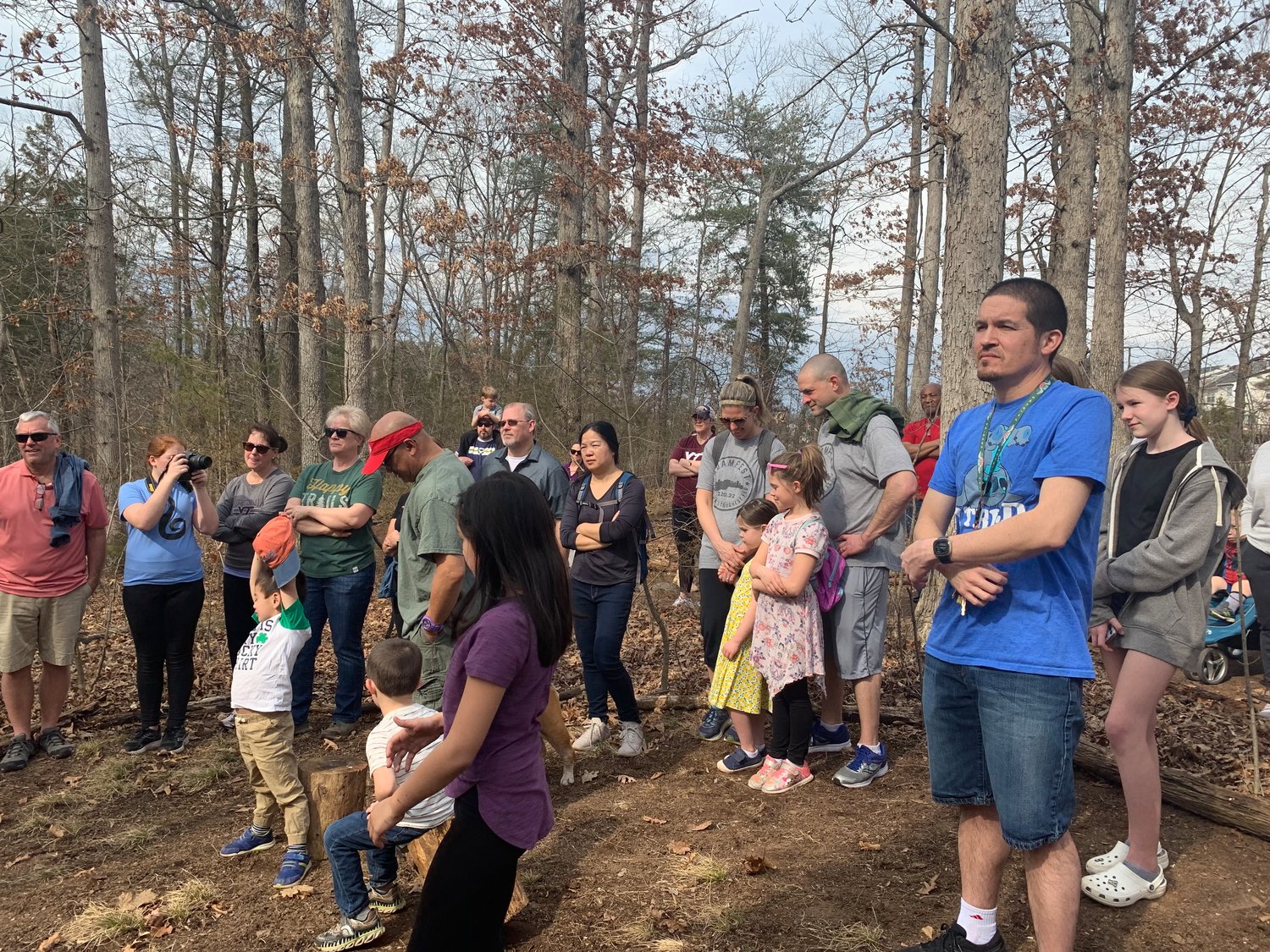 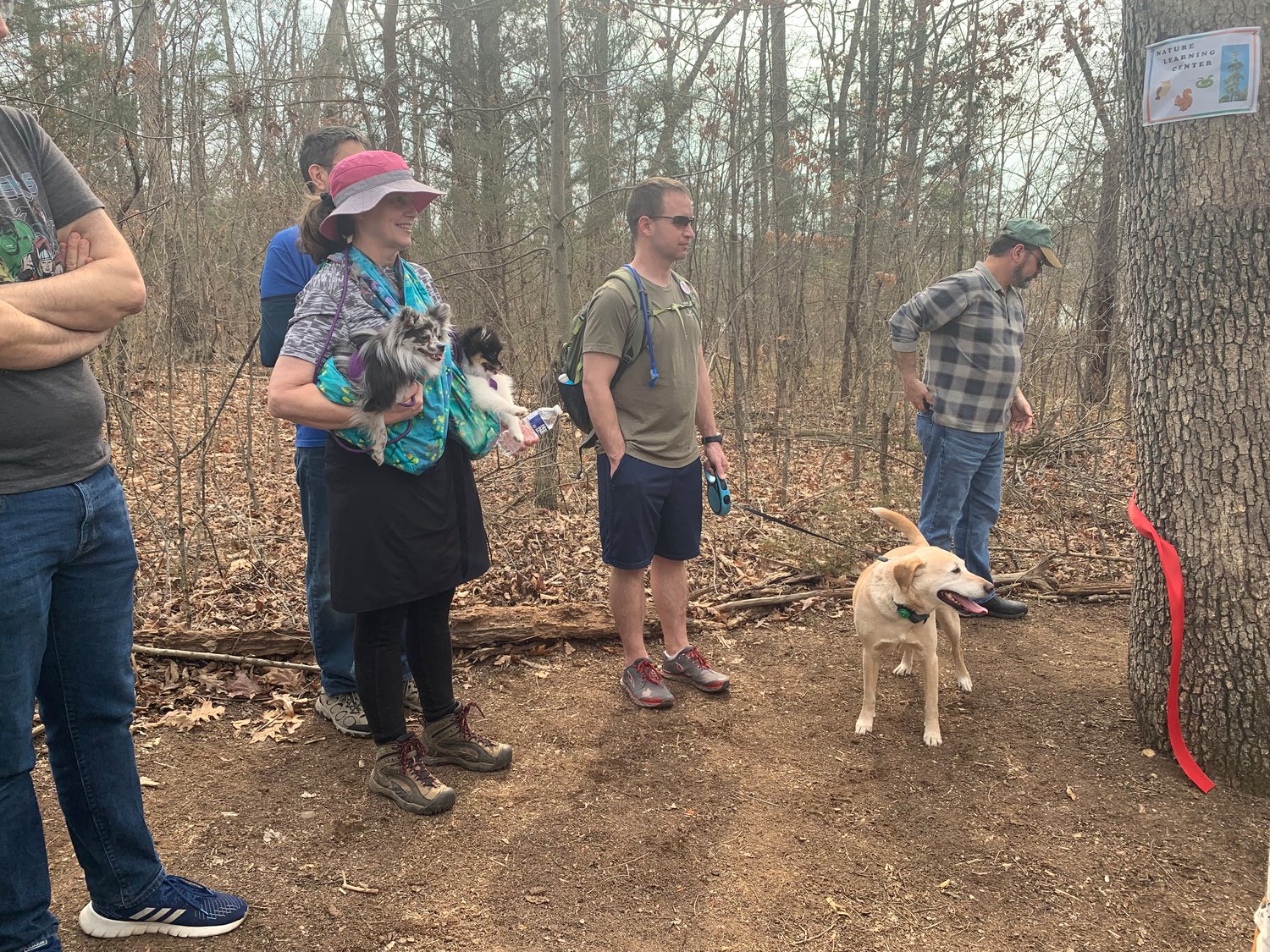 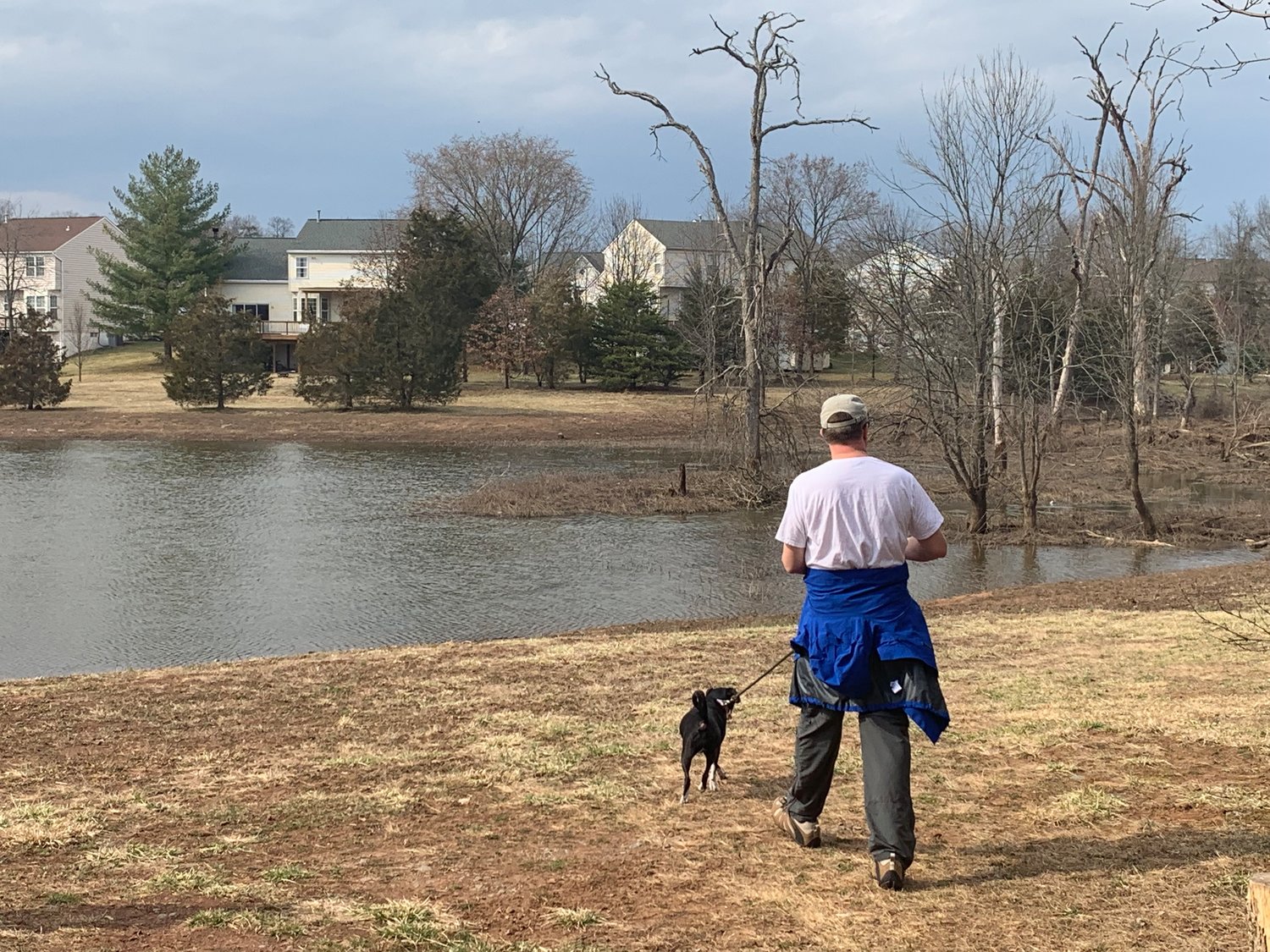 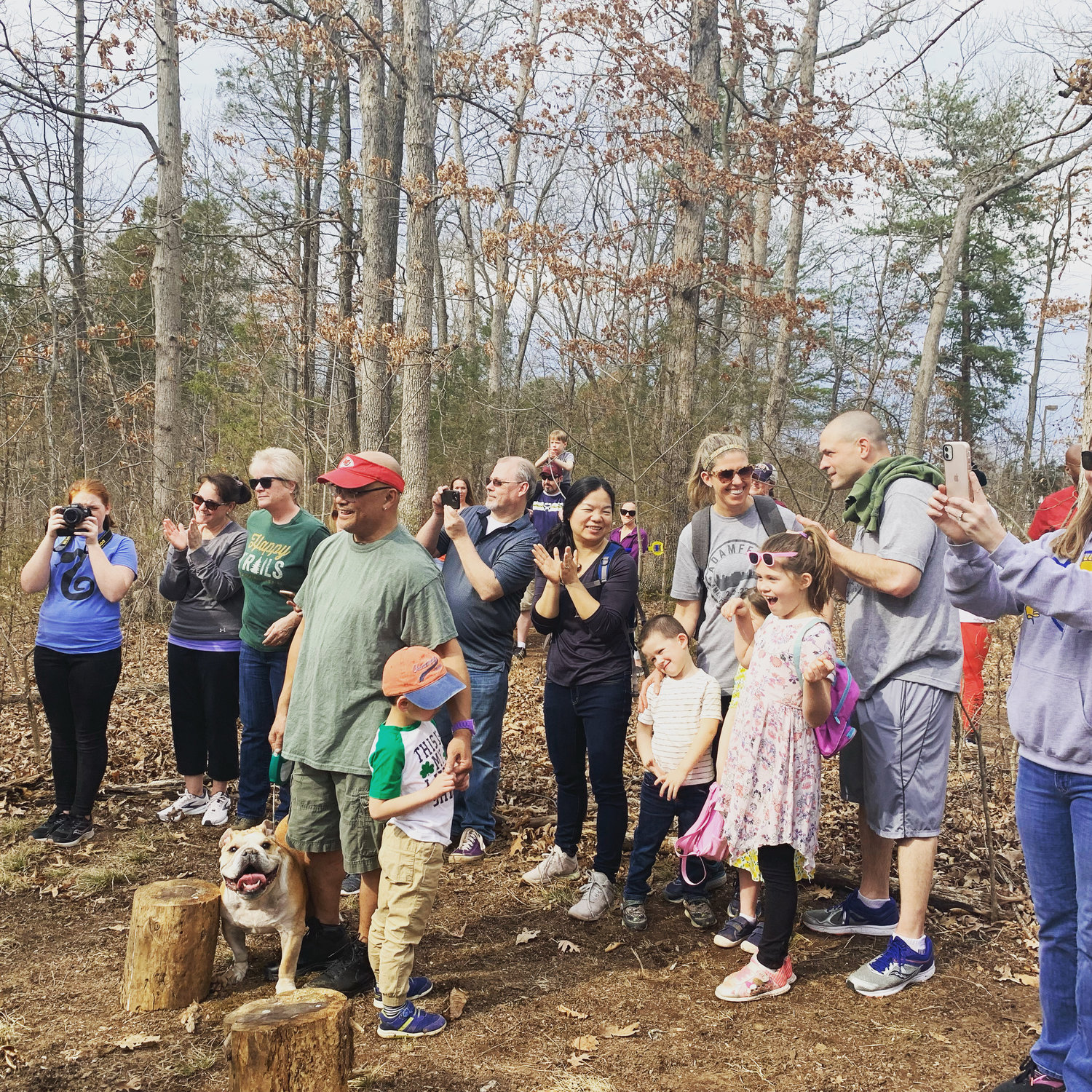 One hundred plus residents of Sheffield Manor Community in Bristow gathered in their neighborhood for a ribbon-cutting, on March 6. Adults, children, toddlers, and even dogs eagerly awaited a hike on the community's first and only off-road wooden trail. For most attendees, the day represented a culmination of months of effort as the trail was 100% built by volunteers.

The trail is approximately a 1/2 mile circle running through a naturally wooded area and passing a man-made lake. The community built it by clearing small trees and brush,  making it safe and easy to traverse. Now, like in many other Linton Hall neighborhoods, Sheffield Manor residents can experience nature up close in their own backyards. They could take a walk on a nice day, birdwatch, play, jog, or attend a nature class.

Sheffield Manor Community was one of the first HOA developments in Bristow, opening more than 30 years ago.  The neighborhood had sidewalks, but no nature trails.

During COVID, resident Bill Crisp thought: wouldn’t it be great if the community had a nature path? It would be something everyone could use especially when people were social distancing.

In August of 2021, Crisp brought the idea to the HOA board. He did not ask for money,  since he believed the community would come together to make it a reality.  The board members unanimously granted him permission to build the trail on an area of wooded land located across from the clubhouse, and next to the tennis courts and parking lot.

"We had the easy part. We just said 'yes,'" said Board member Jeff Poling. Other board members had a similar reaction. “This was Bill's concept. The board said, 'go for it,'" said Katherine O'Connor.

Crisp said the young people were "absolutely" a big help and the project made for "great bonding time" for families and friends.

Crisp felt strongly that they needed to act as good stewards of the environment, leaving the woods as pristine as possible.

"This was one of the hardest parts.  How to create this trail without removing too much. We created the trail around the trees only removing smaller invasive trees/plants. No mature trees were touched." Crisp said. " We reused all the trees/branches that had already fallen to line the trail and will continue to use those for other projects.

And they were extra careful not to disturb the wildlife even if it meant extra work for them. "All the tools we used were hand tools except for two handheld batteries power saws. No gas-powered tools were used so we could stay ECO friendly through the entire process. Other tools used include rakes, trimmers, pruners, etc."

After hundreds of hours, the trail began to take shape. And, after months of work, it was time to unveil the trail, and let the community walk it. 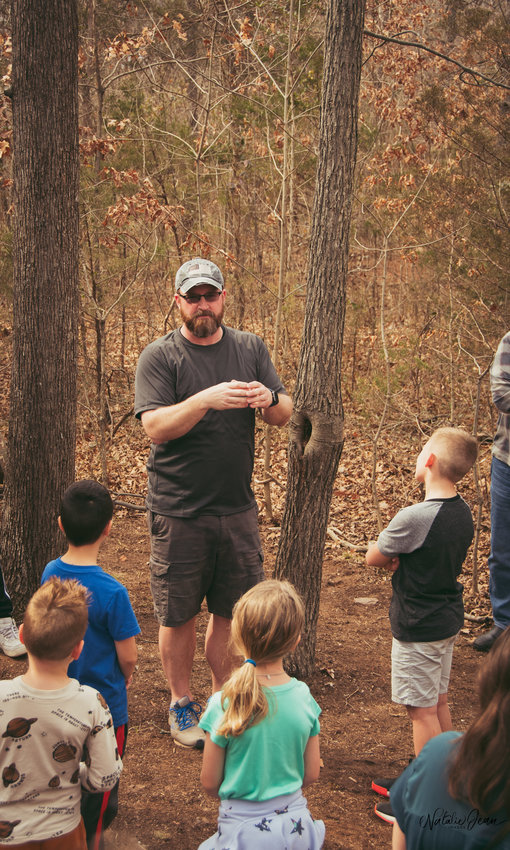 Bill Crisp talks to children about the path. 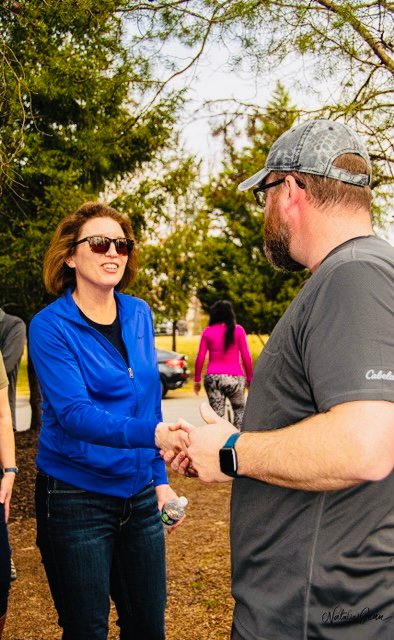 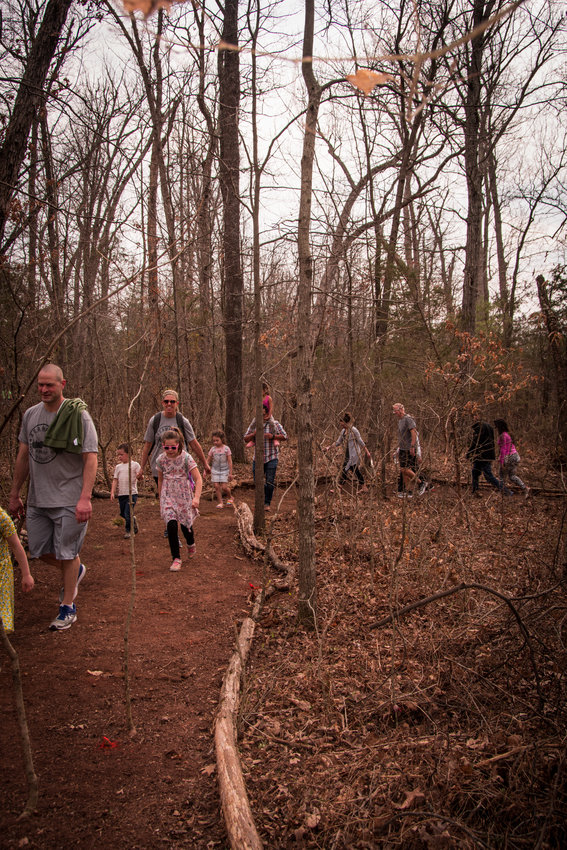 Residents take first walk through wooded path.
Previous Next
The Sunday of the ribbon cutting was unseasonably warm and sunny, a perfect day to enjoy a nature hike. Volunteers from Unity Reed High School assisted with parking, gave out information, and took a resident survey to get feedback.

Pastor Brian Johnson, of the United Methodist Church in Haymarket, blessed the trail, thanking God for nature including the trees and animals on the earth.

Brentsville Supervisor Jeanine Lawson said a few words to mark the occasion. She pointed out that it is was not a government project, rather, it was completely the result of Sheffield Manor residents coming together.

Nonetheless, Lawson knew it was in line with the kind of communities that people desire and she had encouraged developers to build in Bristow. She told them it would  "absolutely enhance” their community.

Once the ribbon broke, community members immediately set out on their first journey along the trail.

Michael Heckman, Sheffield resident, and volunteer trail maintainer at Potomac Appalachian Trail Club - PATC, joined the walk. He said he appreciated what the path offers, so he made it a point to attend. "I care about the community, and I support all the people who put in their time,” he said.

Everyone seemed pleased by the results. “It is great for the community for exercise, nature, and enjoyment. It turned out brilliant, and it is going to be wildly used," said O'Connor.

"It was nice to see the community come together," Poling said. “It was 100% Bill and his volunteers,” he said.

Residents were so excited that they were already talking about extending the trail to an adjacent neighborhood. They did not want to be exclusionary but rather liked the idea of a shared resource, connecting to various neighborhood trails.

In the weeks since the opening of the trail, the Master Gardener visited to walk the trail and help volunteers decide upon what to replant and how to maintain new trees, flowers, and other plant life. Crisp said they intend to invite the Master Gardners to host multiple talks and events on the property.

Crisp said he further plans to provide wildlife education to his community in the form of summer camps, local wildlife identification, and the like.