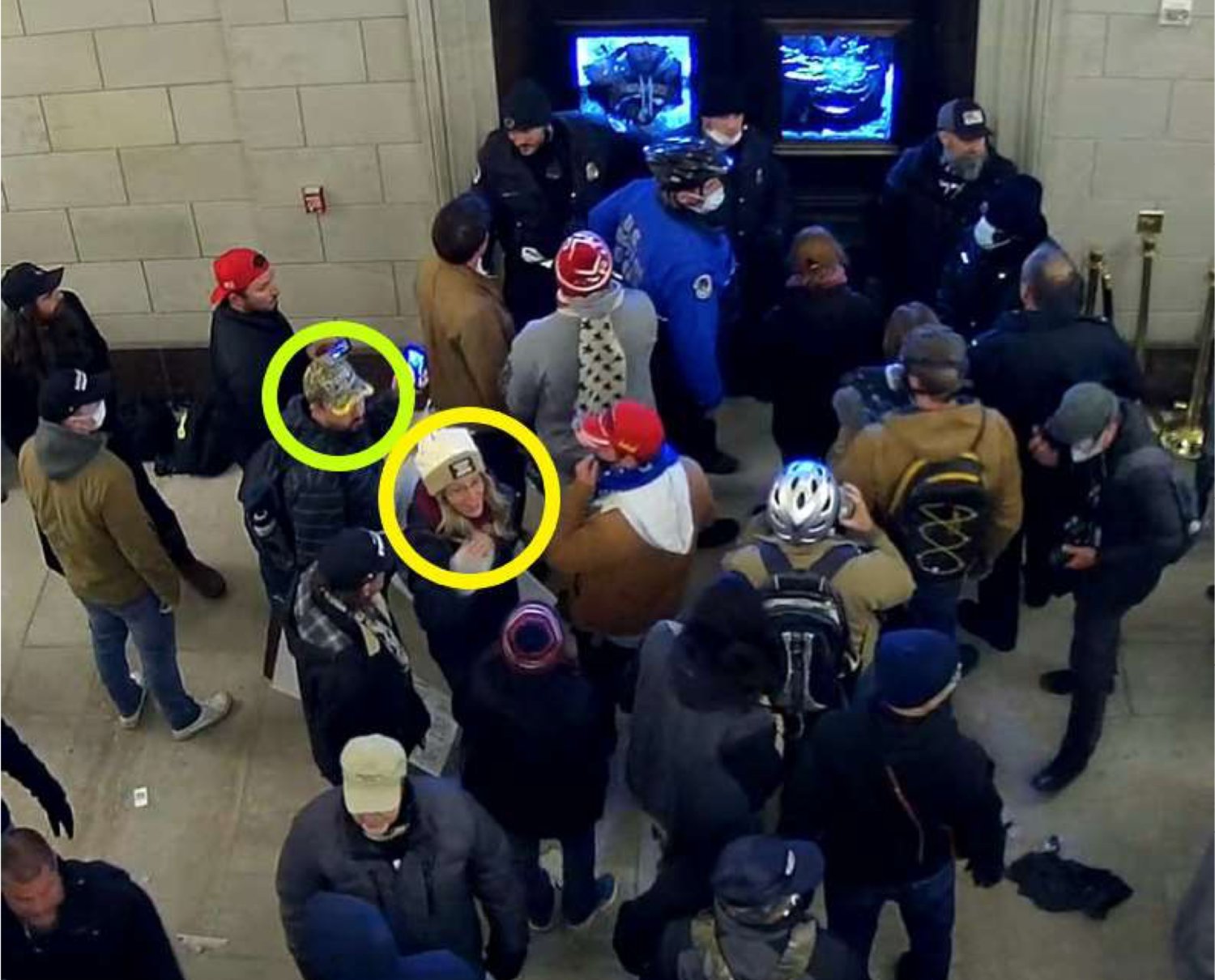 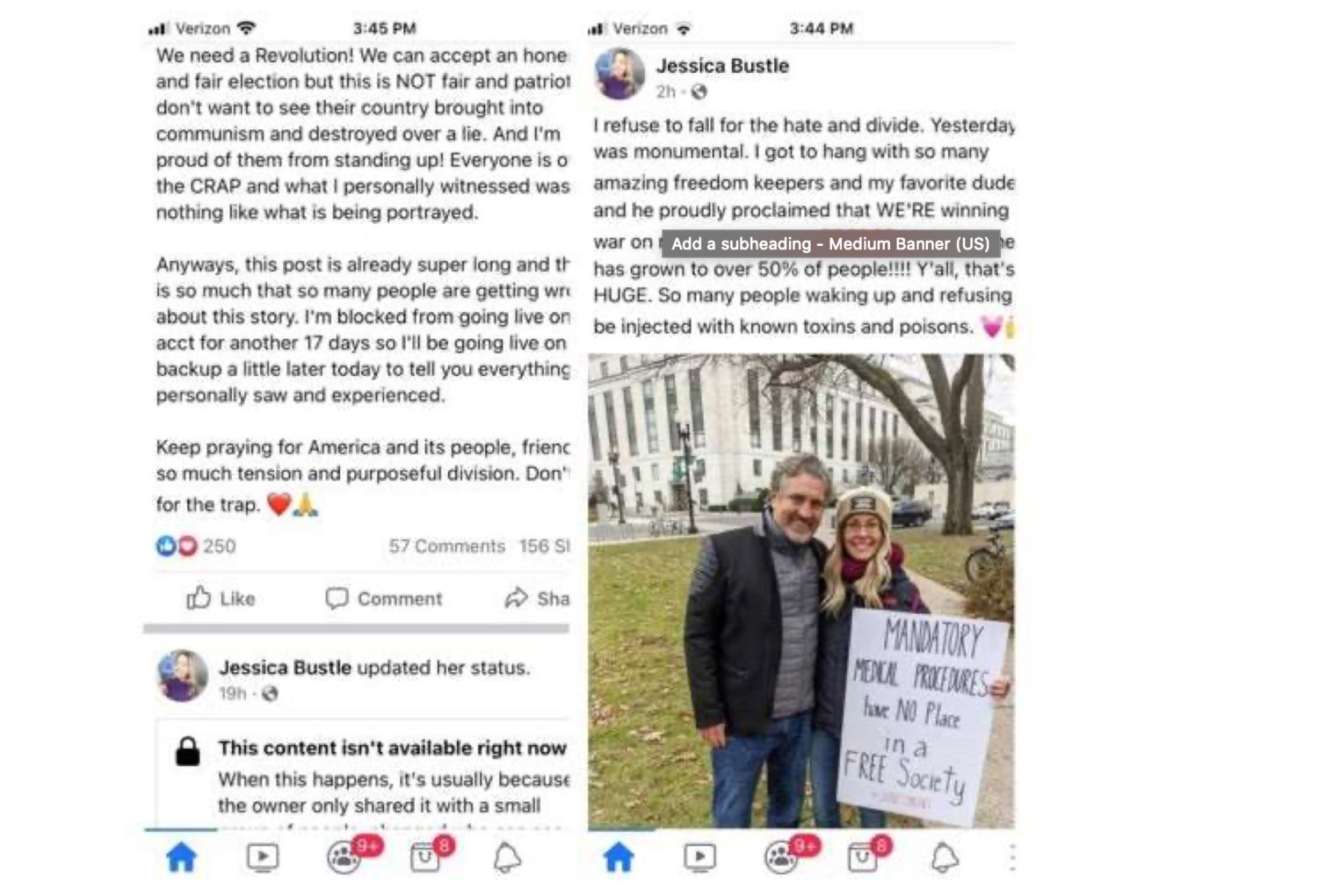 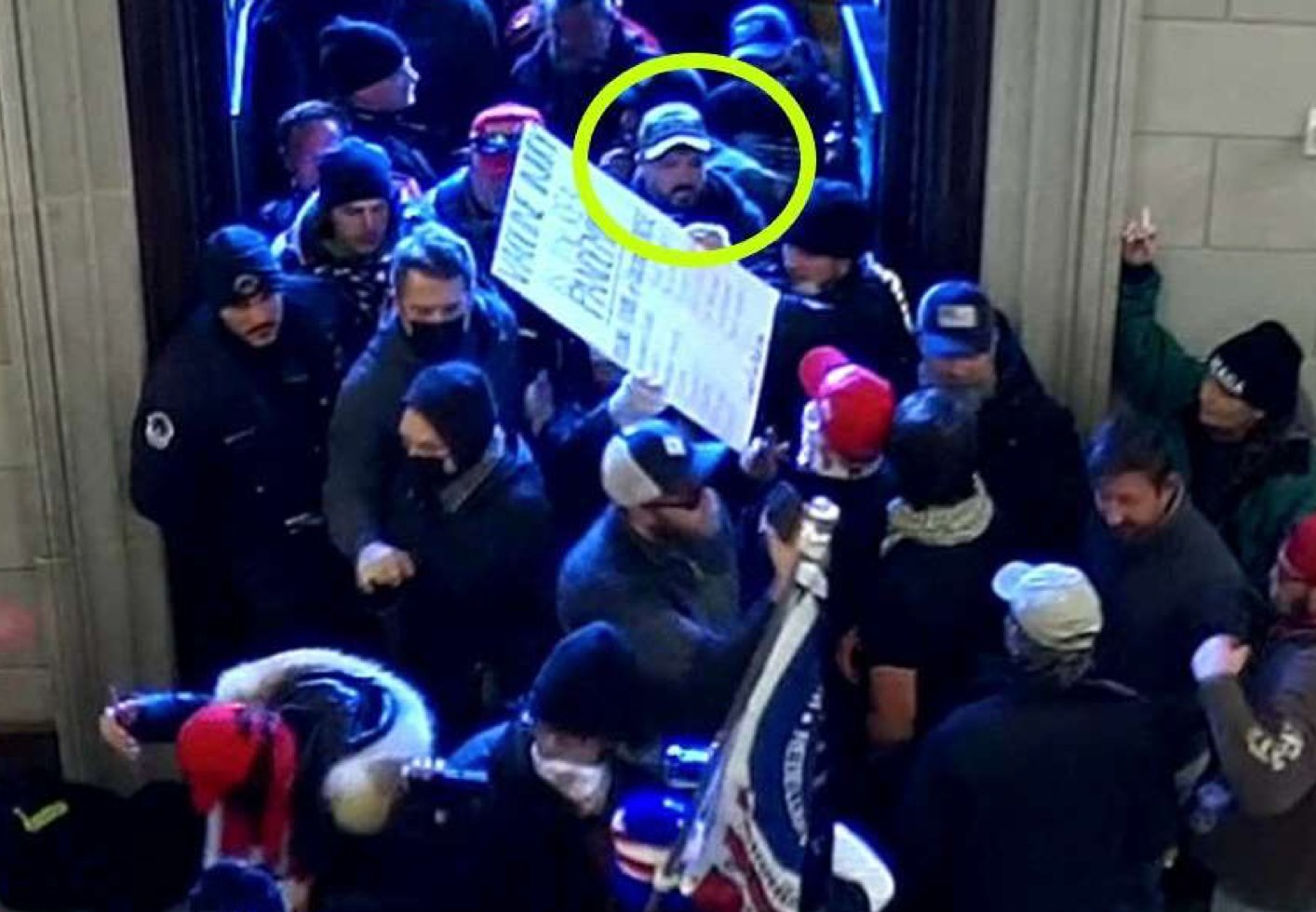 Joshua Bustle is showing in the surveillance video.
Department of Justice 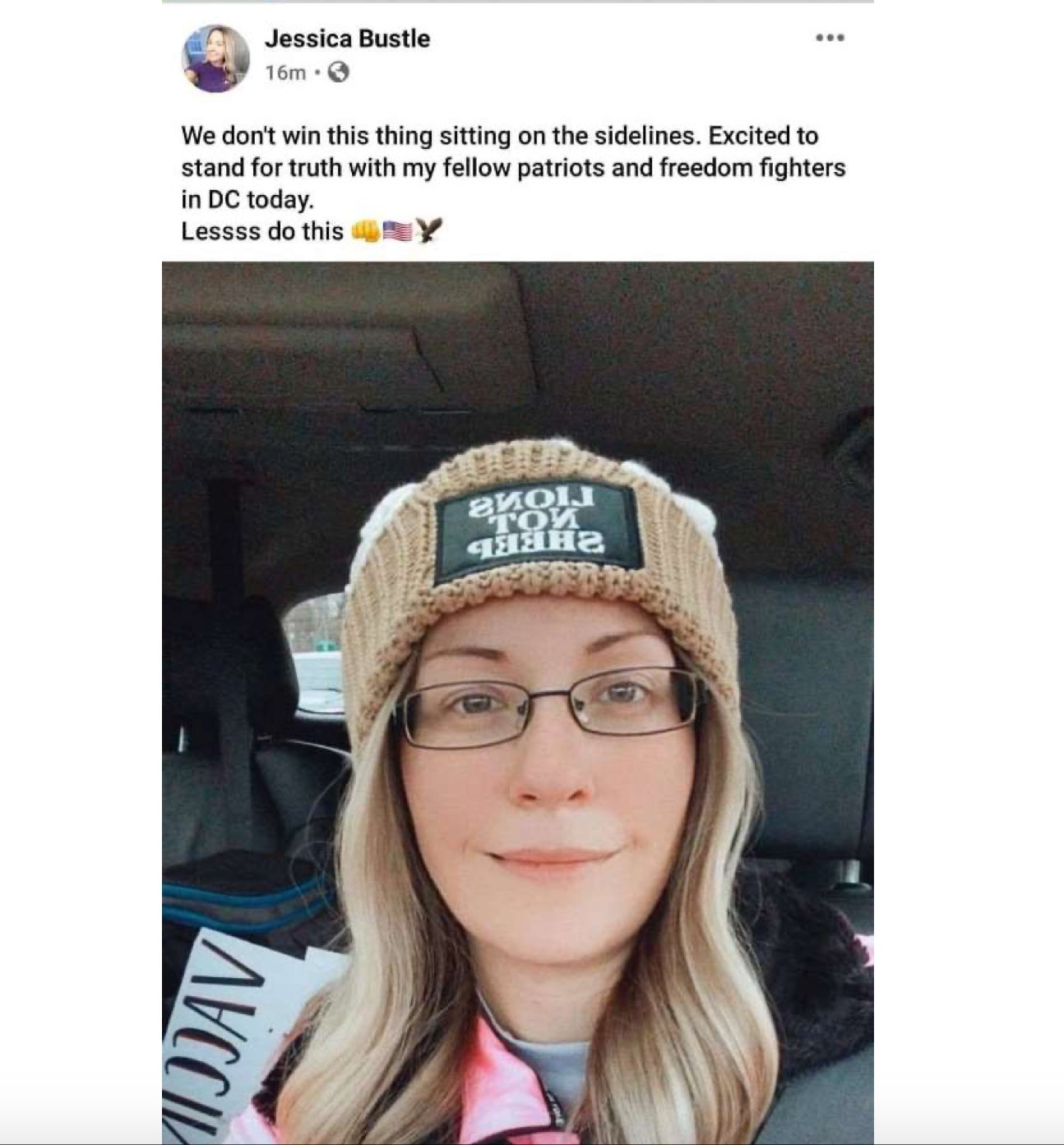 Jessica Bustle posts on Facebook that she will not stand on the sidelines. 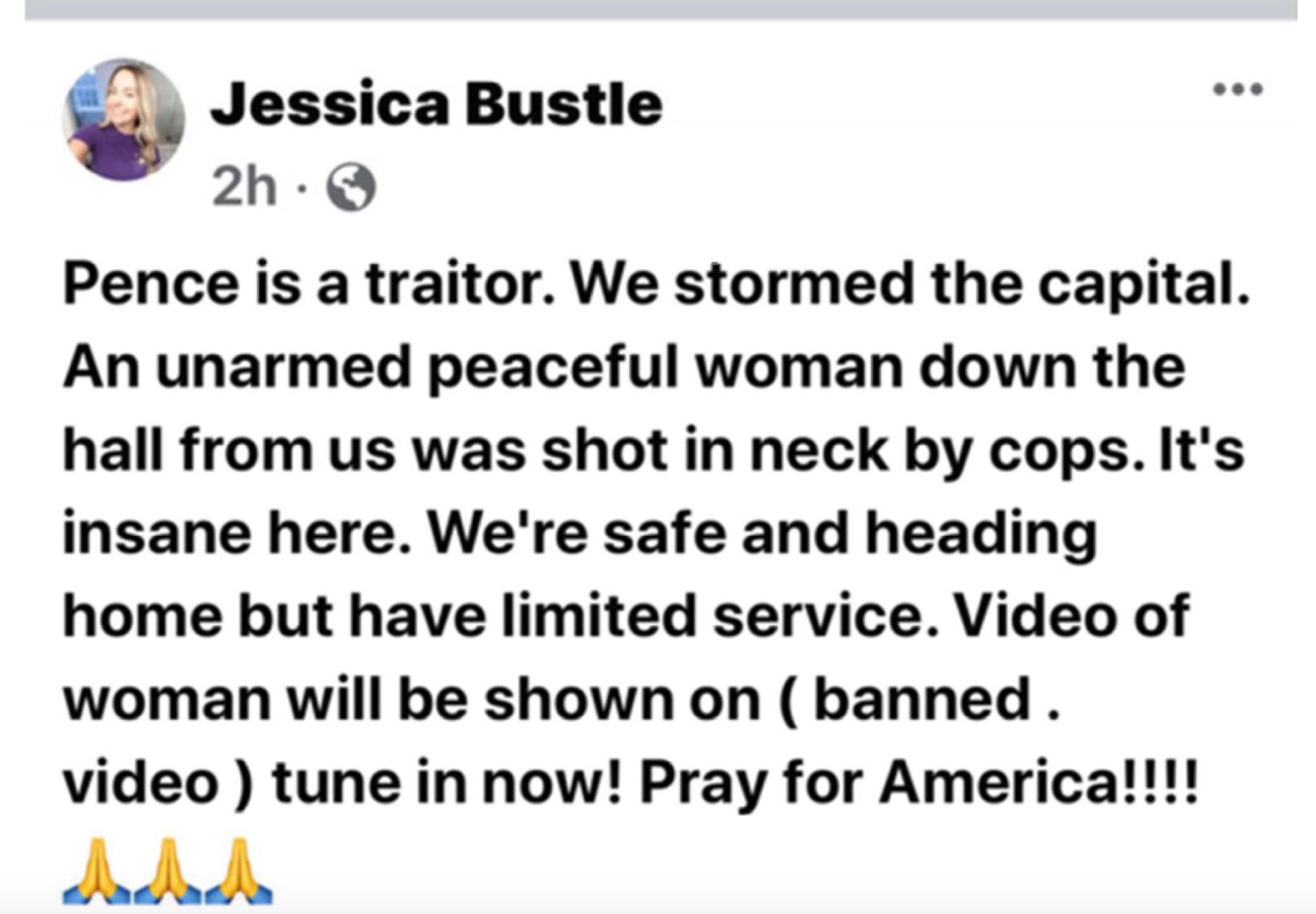 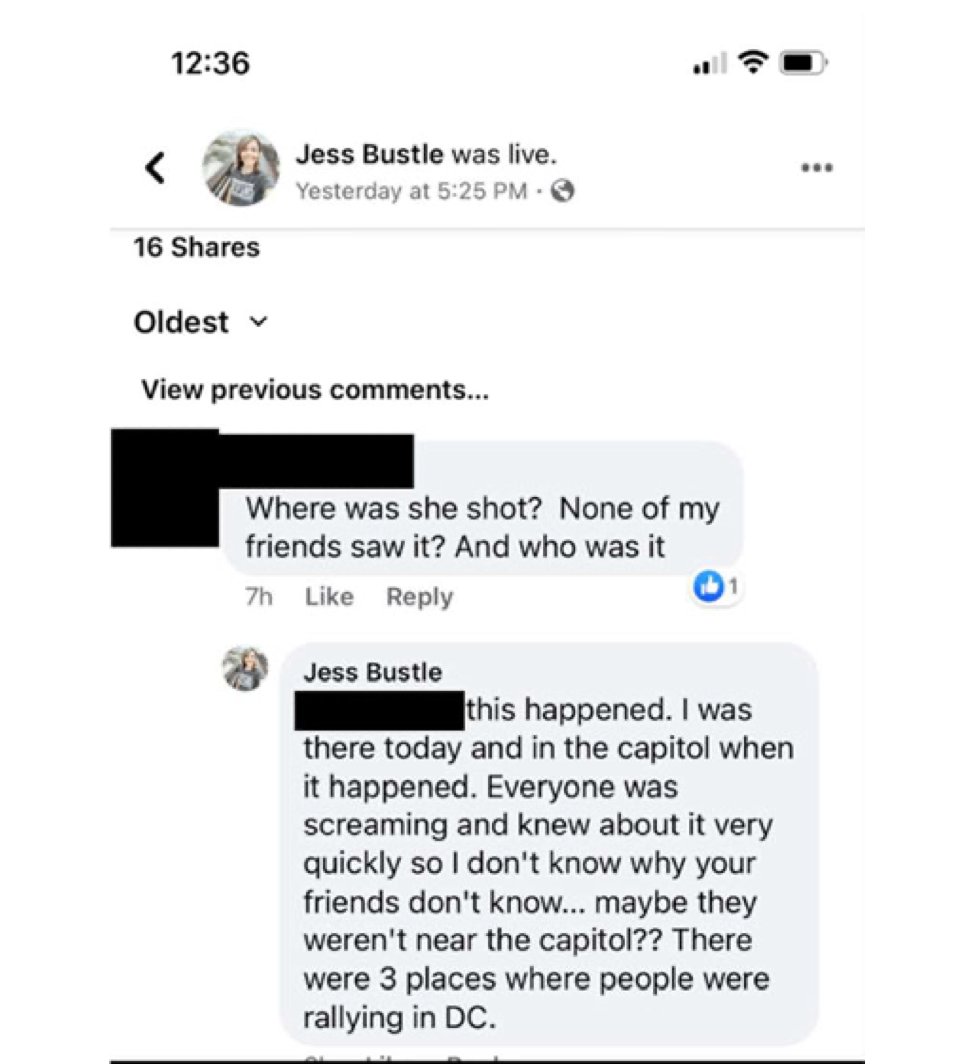 June 15, 2021: A Bristow husband and wife pled guilty to Federal charges in connection to the storming of the Capitol Building on Jan. 6. They were the third and fourth people to plead guilty to charges related to the insurrection.

They could receive a maximum of 6-months in prison, but avoided subsequent sentences that could have resulted should they have been found guilty on multiple charges.

U.S. Justice Thomas Hogan has not yet sentenced them.

Based on the evidence the FBI presented, the Bustles unlawfully entered the rotunda of the Capitol with a crowd of people on Jan. 6. They appeared to have left without causing any harm or damage to any person or government property.

In pleading guilty, Jessica and Joshua Bustle avoided other charges against them included 18 U.S.C 1752 a1, ‘knowingly entering or remaining in a restricted building or grounds without lawful authority,’ and 2. “knowingly, and with intent to impede or disrupt the orderly conduct of Government business or official functions, engage in disorderly or disruptive conduct…;” plus 40 U.S.C. 5104 e2D which includes uttering threats or abusive language inside a Capitol building in order disrupt or impede Congress.

According to a March 4 affidavit, submitted by the FBI, a surveillance video shows the Bustles inside the rotunda during the time of the storming. Cell phone and email records obtained through warrants also place them in the building during that time period.

The FBI affidavit also demonstrats that the Bristow couple was easily identifiable based upon several Facebook posts Jessica had made before and during the ordeal. In one comment on someone else’s thread, Jessica she said she was “in the capitol (sic) when it [a shooting] was happening.”

Presumably on the way to D.C., Jessica announced she would be attending with fellow “freedom fighters.”

“We don’t win this thing sitting on the sidelines. Excited to stand for truth with my fellow patriots and freedom fighters in DC today. Lessss do this (emojis)

She also shared a photo of she and Joshua smiling near the capitol. She was holding a sign saying, “MANDATORY MEDICAL PROCEDURES have NO Place in a FREE Society.”

In addition to posts placing them at the event, the photos made their clothing known to investigators. Social media photos show Jessica Bustle wearing a knit hat that read, ‘LIONS NOT SHEEP.’

In one post, Jessica described the rally as “peaceful.” In another she said she saw people who were likely Antifa infiltrating the Trump supporters to cause trouble.

According to media reports, at the hearing, Jessica said she regretted her actions and asked the judge to consider other evidence in which she posted that she peacefully praying at the rally

Woodbridge Woman, Another Driver Die in Car Crash on I-95