Candidates Face off in PWCS School Board Chairman Debate

The first debate featured a face-off between current School Board Chairman Babur Lateef and his challenger, Gainesville School Board representative Alyson Satterwhite. Lateef has served since last year's special election, and Satterwhite has served in her position for the past eight years.

Lateef has received the support of the local Democratic party and Satterwhite of the Republicans, though they will run without party designations on the ballot.

The debates were hosted by the Prince William League of Women Voters and the Prince William Committee of 100, both nonpartisan groups. They were held at the Red Rose Ballroom in Manassas at 7 p.m. The moderator was Dr. Sam Hill of Northern Virginia Community College

Biographies and more information on Babur Lateef and Alyson Satterwhite can be found on their respective websites as linked. Independent candidate Stanley Bender was invited by did not attend.

Information on the Commonwealth Attorney Debate will not be covered in this article. 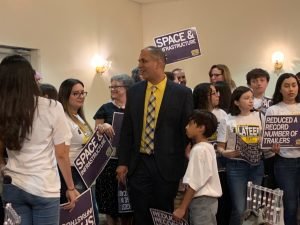 Babur Lateef at the debate surrounded by family and supporters.

Candidates agreed on many aspects, but in some cases would go about them differently. Dr. Lateef was the bigger proponent of funding teacher raises and encourages residents vote for supervisors willing to better fund the schools. Satterwhite wanted to go about school funding in alternate ways, and her main focus was on representing the parents.

Lateef touted giving teachers the biggest raise last year and passing a popular budget. Satterwhite did vote in favor of that budget but did not advocate for increased taxing.

Both said safety and security were key issues. In addition to SROs and infrastructure improvements both are in favor of hiring more people in the mental health fields. Satterwhite said she had already proposed those initiatives, which the board passed.

Both supported more funding for schools but would go about it in different ways. Lateef asked community members to elect Democrats to better fund schools. He would use that funding to give teachers raises, to reduce class sizes and improve infrastructure and to heighten security.

Satterwhite suggested changing the revenue sharing agreement with the board to bring more county tax dollars to the schools without them having to be matched on the county side. She would encourage supervisors to find money in different ways such as other taxes that used to go towards the schools. She believes the board can continue to attract commerce to the area.

Satterwhite’s priority is parent engagement and being responsive to parents. She believes school board members need to push back against the superintendent and set priorities.

Lateef said the superintendent has helped Prince William County to be as successful as it has especially improving graduation rates. He wants to focus on salaries and decreasing class sizes. It is on the two boards to do better.

Both wanted to use funds to decrease class sizes. Satterwhite said that is something they have already done and pointed out that former Chairman Ryan Sawyers, a member of Lateef’s Democratic party, was against that for political reasons. Lateef believes some turnover on the board could help make that happen. 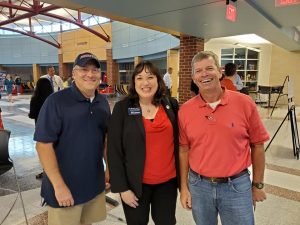 Both wanted to move away from a testing culture. They would lobby Richmond to reduce state testing. Lateef would want to adopt different learning approaches that mirror STEM.

Both wanted to expand specialty programs and look for where they are most needed. Satterwhite said this also includes Career Technology Education. Lateef praised sending students Thomas Jefferson High School whereas Satterwhite focused on the Governor’s School.

Satterwhite argued she was less partisan than Lateef and he continued to talk about electing other candidates. Lateef emphasized teacher raises more than Satterwhite and said elections would matter in funding schools.

BL: As a physician and parent public school worked for him. His platform is built on four tenants: educational success, space and infrastructure, safety and security and teacher. “We gave the largest single teacher raise in almost a decade, 4.8%.” and the best budget to form a “more perfect community.”

AS: Unlike her opponent, she would not simply go along with the administration. She proposed the special education audit, increased pay for school bus drivers, key security improvements, nurses in every school, new counselors and opposed development that would bring overcrowded schools. She would best represent the people.

BL: His priorities are student success, security, space and infrastructure and increasing salaries, plus closing the achievement gap. Giving teachers a 10% increase. Last six months 8-0 approval of the budget by school board and supervisors. Recommends replacing Jeanine Lawson (Brentsville-R) and Ruth Anderson (Occoquan-R) “who are not committed to our classrooms.”

Credit to Dr. Walts with graduation rates better than Fairfax. Said: let’s elect supervisors who care like Maggie Hansford (for Brentsville-D) who is a teacher 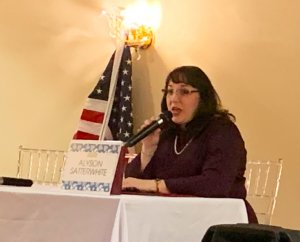 AS: Let’s focus on students not politics. SOL scores are not great. Tell state “you are testing are kids too much.” Reduce class sizes. Spend on security, not the superintendent’s priorities. Get rid of the Revenue Sharing Agreement to bring more tax dollars to school and lobby Richmond.

“We’re working for kids. Students don’t have an R or D next to their names.” BOCS offered $21 million to them and the last Chairman refused and tried to obstruct. Now the money helped build John Jenkins Elementary School.

What steps do you believe are needed to “Provide a World-Class Education?”

BL: More funding. “Get away from a testing culture and move into a learning culture.” PWCS invested in robotics. Students should learn in project-based ways. Space, new infrastructure and salaries lead to success. They’ve engaged parents with new software and improved student to counselor ratios. He provided “biggest raise in years” reduced overcrowding.

AS: We’ve had eight years of teacher raises. She proposed adding more counselors, psychologist and social workers. Remember the last Chairman did not want to accept $21 million. Also, wee worked to open new classes and reduce class sizes by matching funds even before the Chairman was on the board.

To attract and retain teachers, look at details such as funding fertility treatments. Be upfront with families. Shouldn’t be sending notices disrespecting teachers and parents.

Working collaboratively with the Board of County Supervisors is key for delivering results. How have you worked successfully with them? How would you in the future.

AS: Eight straight years of teacher raises and added support staff for mental health. The last chairman tried to refuse $21 million grant from supervisors. We’ve created a joint infrastructure task force. We do not have taxing authority but we set spending. You need a school board leader “accountable to you.”

BL: He has a good relationship with the board. They approved his budget, but some do not have a record of supporting schools. He asks people to support Maggie Hansford for Brentsville and Kenny Boddye for Occoquan. He said we are so successful now. With proper funding, we could “hit it out of the park.” 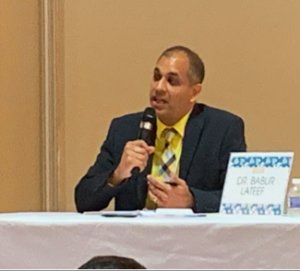 What would you do to ensure high-security measures at all schools?

BL: So frightening with the current slew of the mass shooting. Had “demented sick (fearful) thoughts” worrying about his children. Gun violence is a real societal problem but on the school level, we can’t solve that. Have to increase security, and employ best practices. Hire even more counselors to help with mental health issues. On gun violence “elections matter.”

The board has been very unified on the matter of school security. “This board has done an excellent job.”

AS: As a military family, she is used to having security and believes in it. They spent $1 million this year to speed up security projects. They need to be expedited. PWCS had many implemented ahead of Fairfax. More counselors will help with so many things: healthy students, school culture. Make sure you don’t let anyone into the school.

The number of PWCS students enrolled at Thomas Jefferson High School in Fairfax is very limited. Would you support the creation of a comparable school in Prince William County?

Note: TJHS is a publicly funded specialty science and technology school. There are limited seats for only the best and brightest and students must apply and compete for them.

AS: We have the Governor’s School at Innovation Park. Students take college courses half days in 11th and 12th grade. There is pre-Governors school as Osbourn Park High School. Like TJ, they are great programs. Can expand that program.

BL: His son attends TJ. It’s an excellent program and not only STEM but all subjects. “Project-based learning.” They’ve bought unused seats. PWCS has other wonderful programs like Cambridge and IB. He’d love to see more of such programs. Let’s also invest in universal PreK for best outcomes.

Some critics say that high school specialty programs have not been equitably dispersed across the county among the high and low-income neighborhood.

BL: He’d love more specialty program, doesn’t agree that are dispersed inequitably. Stonewall Jackson has a great IB program. Those kids get into the best colleges. Let’s do gifted class approaches for all students. Invest in specialty programs.

AS: We’ve got CTE classes everywhere and academic programs everywhere. Colgan High School has a great fine and performing arts program. Let’s expand that. We plan to add more programs to Stonewall and elsewhere to attract students.

What are the three most important priorities you would advocate for in order to serve all students?

AS: Continue to hold our superintendent accountable. She originally ran to promote a math program. “We have to fight hard for our kids…Stand up for students and families.” Reduce class sizes. They hurt teachers and students. Continue working on student safety including issues of bullying and mental health.

BL: It’s still: student success, safety and security, space and infrastructure and salaries for our teachers. Expand PreK. Attract and retain more teachers by paying them more. Have buildings that are equitable. Fund the schools more. “You will see our scores improve.” Right now we have the lowest-paid teachers in the region and the highest class sizes.

AS: Her hope was my children would grow up in a better world. That changed after 9/11. Now every student in the division was born after that event. It is history for them. What we can do is “rededicate ourselves to community and family.”

BL These children are the first to have been born in the new millennium. They will have to solve complex problems, “climate change,” “darkness has fallen on democracies.” But they are, “empathic and ambitious.” They will be using the technology we can only imagine. We have to prepare them because the world is evolving quicker than every. Let’s make the next generation “productive and prosperous.” Vote on Nov. 5th.