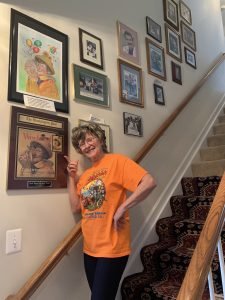 Carol Collins shows photos on her wall in Gainesville depicting her 44 years in clowning and entertainment.

Carol Collins of Gainesville has been a clown and children’s entertainer for 44 years, having built a successful reputation in the Washington Metro Area.

Today, she is mainly “Safari Bingo,” performing comedy magic shows with her dancing little dog, her hedgehog, and racing hamsters. Drawing upon her background in education, Safari Bingo teaches kids about animals and how to treat them. Laughter and learning make her shows ideal for events, preschools, camps, libraries, fairs and festivals.

Partyco-op.com books a variety of live entertainers - everything from clowns, to musicians, characters (like princesses and super-heroes), magicians, balloonists, circus acts and animal shows. They perform at children’s birthdays, camps, schools, company picnics and almost any event for people of all ages!

Since the pandemic, Partyco-op has booked live acts performed in accordance with social distancing, as well as virtual live-interactive video performances on Zoom.  Performing remotely has opened the door for booking their performances beyond the limits of D.C. traffic such as booking international shows via her contacts abroad.

She also offers motivational speaking to help adults look at life in a positive way for the health of it! www.LiveLifeWithLaughter.com. 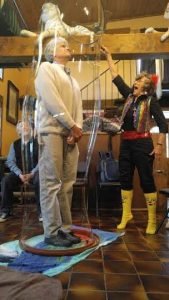 On Halloween 1975, Collins, a 6th grade teacher, dressed up her newly adopted Vietnamese daughter to trick-or-treat and her friend gave her a clown costume for Carol to wear.

The local librarian saw them and asked if they would dress as clowns and sell tickets for the library fundraiser. Calling themselves, “Bingo and Bongo,” they sold over a thousand tickets! Within a month, Carol gave up teaching and began a career in clowning.

She built the persona, ‘Bingo the Clown’ wearing a costume with full makeup and large clown shoes.

As a clown, Carol had various experiences. She worked as substitute circus clown and for a short time entertained children at National Children’s Medical Center in Washington, D.C.

She performed as an extra with Tom Selleck in “Her Alibi,” and once performed at the White House during the Reagan Administration.

Performing overseas, Carol has learned conversational Japanese, German and Spanish, which has proven helpful for entertaining in multicultural communities. 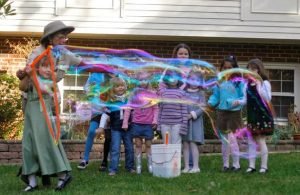 During the early 90's, she and her husband, Malcolm, started the “Bingo and Buddies” talent agency in Kensington, Maryland. Collins sold that agency and started the Newventur Entertainment, LLC, in Northern Virginia, which she now operates on her own .

In 2001, Carol was named the “Business Woman of the Year in the Arts” from the Business and Professional Women of Fauquier County. That same year, Bingo was featured on the cover of the Washington Post, Weekend Section in an issue dedicated to entertainers in the D.C. Metro Area.

Forty-four years since Bingo was born on Halloween, she is still performing for kids parties and events. Until the pandemic, she was regularly clowning and making balloons at the Signal Hill Chick-Fil-A in Manassas for 12 years!

Collins remains active in the community and is currently a member of several local business groups.

After all these years, Carol still loves entertaining, especially for children. “Why should I retire?” She says. “I am blessed to  be doing my hobby as my career!"

Carol is a one stop shop for all your entertainment needs at numerous venues including fairs and preschools. She is sure to bring joy and laughter to any event! 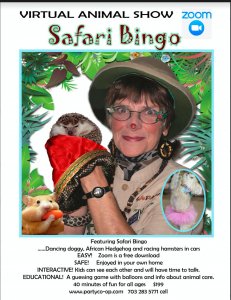 Safari Bingo is performing both live and virtually over Zoom.