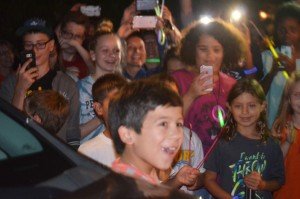 J.T. Church is greeting by a welcome party outside his Bristow home.

J.T., who studies jazz, modern dance, hip-hop, tap and ballet at Gainesville Dance Center, competed on “So You Think You Can Dance: The Next Generation (2016),” finally earning second place on a show that began with 100 skilled competitors.

J.T. Church returned to his suburban home victorious. Not only was he a public figure, now, but he was transformed from a summer spent in Los Angeles, performing on TV. On Fox's SYTYCD, he had been given the opportunity to perform with professional dancers in front of a national audience.

J.T. said experience had been “amazing” and “the best summer of my whole life." He said he hoped the experience would open doors for other kids.

He thanked his neighbors, saying it was “the best way to come home,” and “the best surprise ever,” adding “I love you guys.”

Friends gathered around J.T. who gave hugs, posed for photos and signed autographs.

Neighbors explained how J.T. came so close to victory in a competition despite beginning his journey as the dark horse in the contest. Contemporary dancer Robert Roldan chose J.T. as a “wild card,” the only one of his dancers who did not perform modern dance in his audition.

Rather, J.T. had chosen to perform a jazz routine to highlight his natural showmanship and because he loves musical theater.

J.T.'s mom, Leslie Church, recognized her son’s unique ability but was still surprised to see his progress over the summer.

“He did surprise me," she said. " First of all, he grew significantly."

Leslie believes working with some of the best in the businesses helped J.T. take his dancing to the next level.

However, such polished performances also required hours upon hours of hard work. J.T. practiced all summer long, learning two new dance routines each week, and working to perfect them before the show went live on Monday evenings.

He remained focused, and it wasn't long before the SYTYCD judges went from calling him "cute" to calling him "strong," "limitless" and the next Prince, or "Little Prince."

J.T. said the best part of the experience  was working with those dancers and choreographers  he so greatly admired. He was also happy with the relationships he formed, saying of his competitors. “We’re all best friends now."

Jennifer Jones, neighbor, and friend of the family, believes viewers responded to Church’s natural talent and his maturity, modesty and charisma.

“He was himself [on television]- no pomp and circumstance. That was him.”

Jones said that when the television show decided to go with an all child cast there was a lot of trepidation: would it be too cutsy, too over the top, would the kids be talented enough?

J.T. and his peers were evidence that there are many children who are talented and mature enough for that kind of competition and celebrity exposure. Jones thinks J.T. handled the pressure and the criticism like a pro.

“Seeing him jump on the trampoline in the yard, I would say to myself: ‘Too bad So You Think You Can Dance doesn’t have a show for younger kids.”

After the rush of stardom, returning to school may be a bit of a transition for the dancing sensation.

J.T. said he’s excited to see all of his friends in school, but he's not overall excited. “Umm...Not so sure about the whole school thing. It’s iffy,” he said.