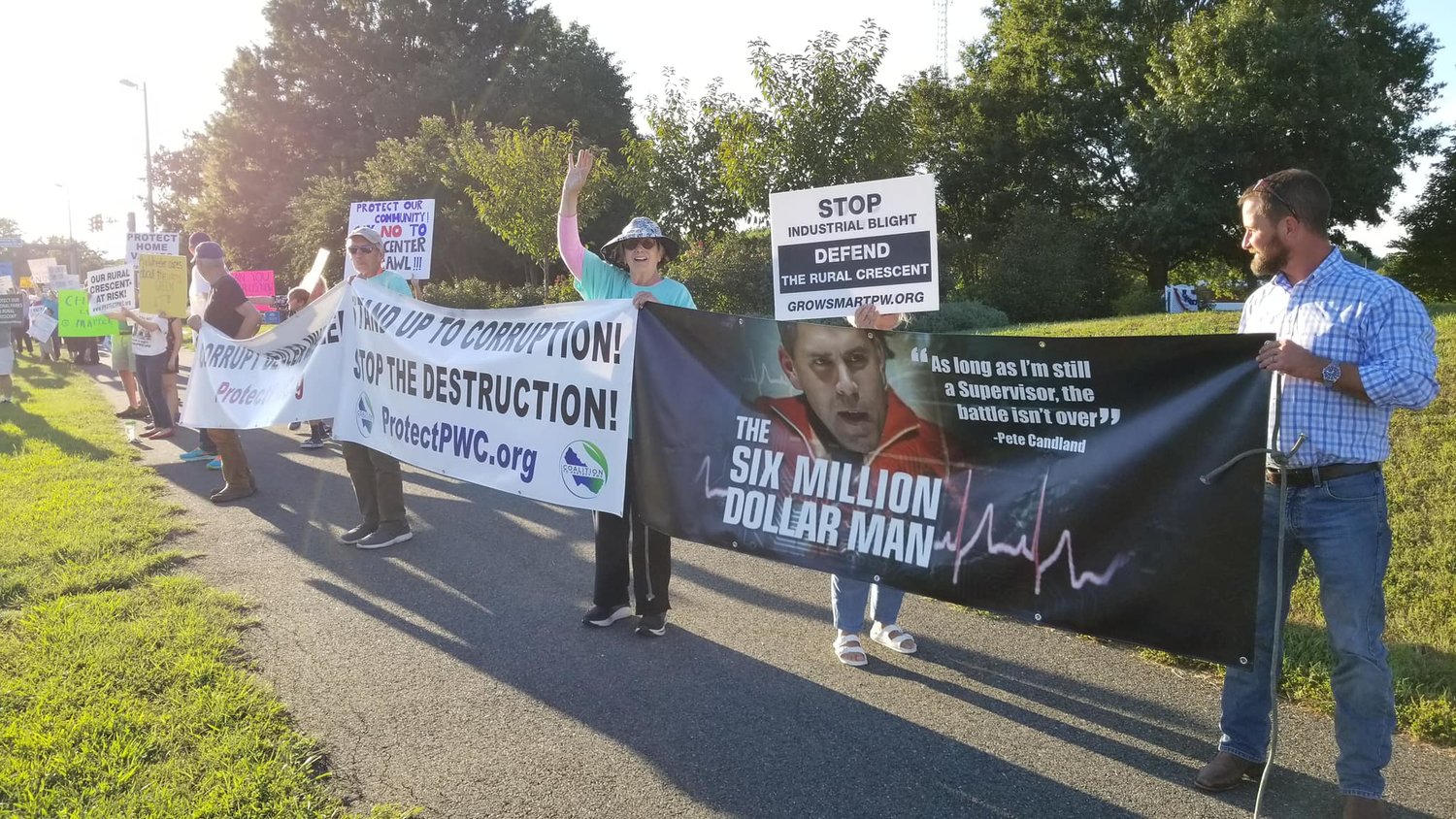 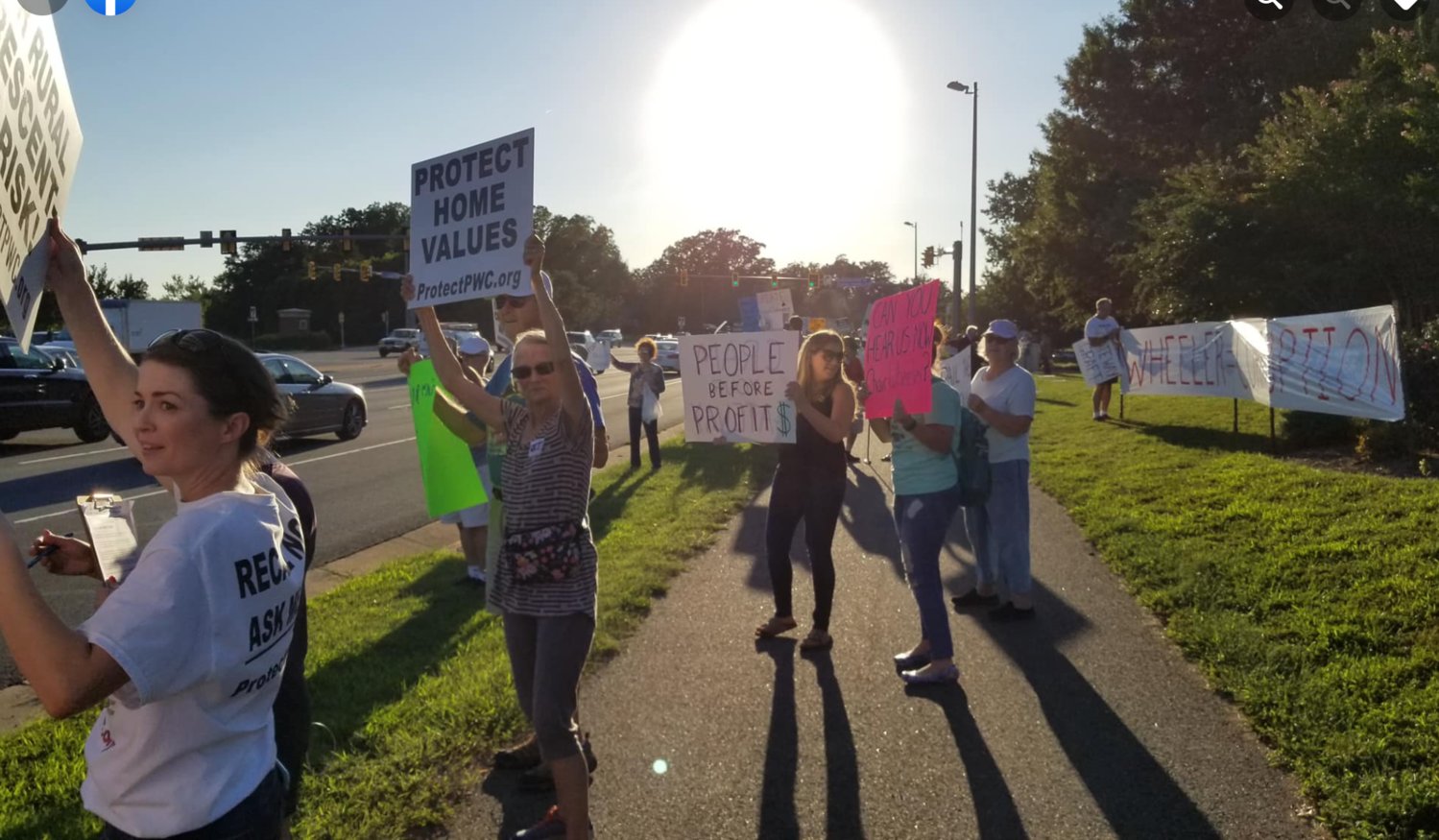 Approximately 150 people gathered along Prince William County Parkway, Tuesday, to protest the incursion of data centers into the Rural Crescent and outside the data center overlay district, especially near residential neighborhoods.

True to its name, the "Coalition to Protect Prince William County: Stand Up to Corruption, Stop the Destruction" demonstration took aim not only at developers but also the supervisors and planners whom they allege put profit over people.

Elena Schlossberg of the Coalition to Protect Prince William County, opened the conference by explaining that for her, the fight to protect the county lands and its residents has been going on for seven years.

In 2016, stakeholders, including citizens came together and created a “Data Center Opportunity Zone," Schlossberg said, explaining that it was sufficient “Until this new board and this new chair.”

Now they allege money and corruption became the impetus for supporting data center development outside that zone.  It all began with the new board, she said.

Wheeler has investments in tech companies that do or will own data centers in Prince William and had invested in the Blackstone investment group, which is also a holding company purchasing property on which to build data centers.

Meanwhile, Supervisor Candland joined with neighbors to sell his land on Pageland Lane to build the Prince William  Digital Gateway be approved. This left  Gainesville Magisterial District without direct representation on the board.

“We expect our county our county government to listen to the most important stakeholders," said Schlossberg. "and that is ‘us.’”

“We are not going to allow Ann Wheeler to shut us down. Not now, not tomorrow, and not ever.”

“Nobody here is making any money,” she said of Coalition members. “We are here because we love our community….we love this county and we are one Prince William.” “Forever change and decent what makes this county special.”

Watch the 'Facebook Live' video to hear comments from other speakers as well.

"We’re trying to provide a solution. We are trying to sell our land but boy is it nice to see the rest of the county benefiting.”

Demonstrators made other points about the data center incursion. Dr. John Lyver, a retired NASA scientist said that the county estimated, that 95 data centers could fit on the approximately 1300 acres of the 2100 acres that would be rezoned, and sound is summative.

Lyver said the county is prepared to approve tech centers without conducting studies on how it would affect noise, water, sewer, endangered animals, Civil War, and freed people historical areas. Nor did the planners study whether the electrical grid is sufficient, or whether Virginia could provide enough electrical power for all the planned data centers.

"Shouldn't our leaders be informed before they go to vote," Lyver asked.

"Basically, the county has given the data center developers a blank check and written themselves out of the process.

Supporters of the rural crescent, such as Pageland resident and landowner JP Raflo told Bristow Beat that they also want their story told. They believe the Digital Gateway will be advantageous for the county.

"Yes, we all know we are going to make a lot of money, that’s a big driving factor," he said, but, "Pageland Lane is the one area that is the most promising for data centers."

Raflo noted the area is far enough for residential homes and the county will be gaining ten miles of trails connecting Conway Robinson State Park with Long Park in Haymarket.

And he believes that billions of dollars of data center revenue can help bring Prince William County to Loudoun County level funding.