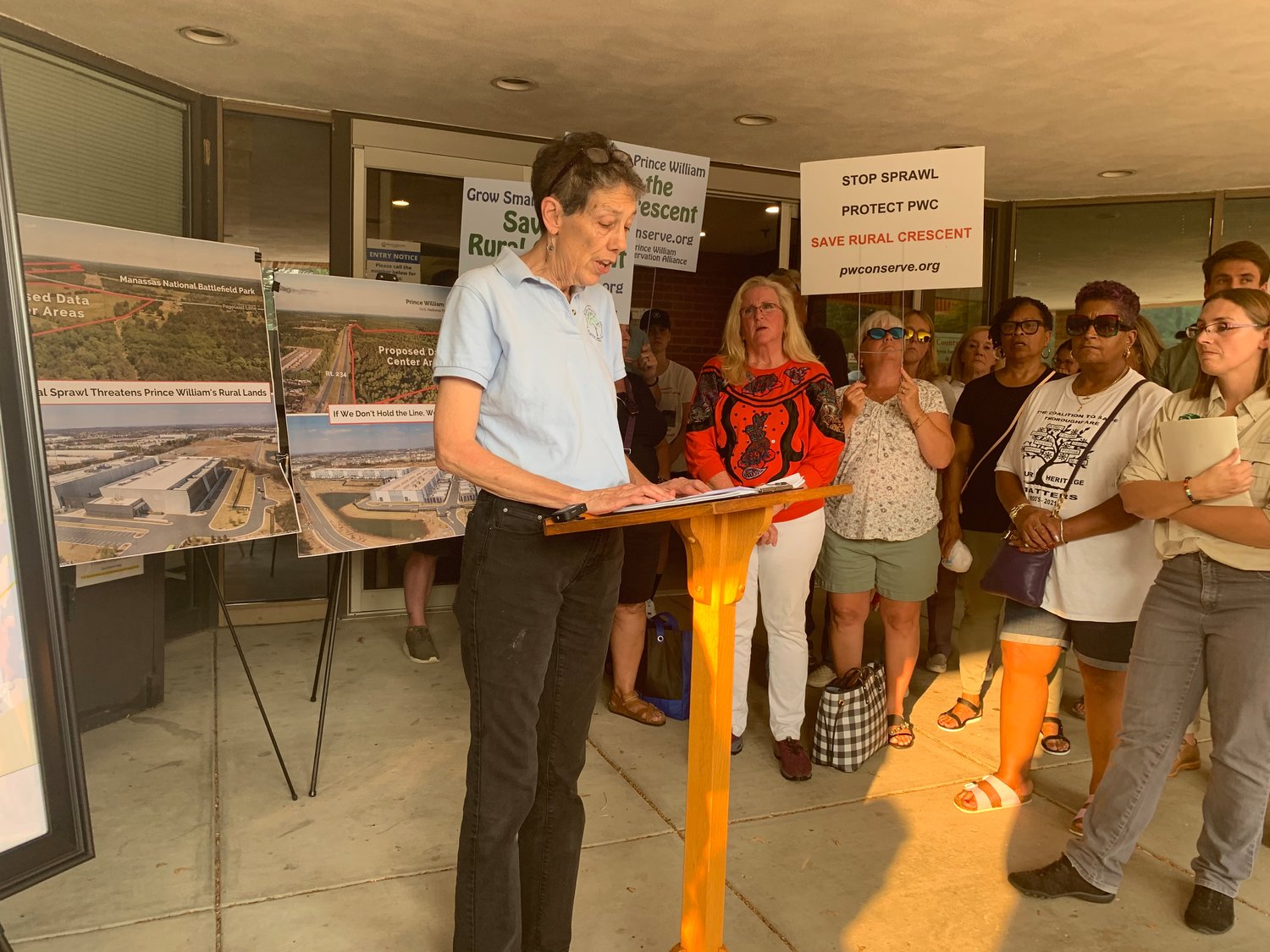 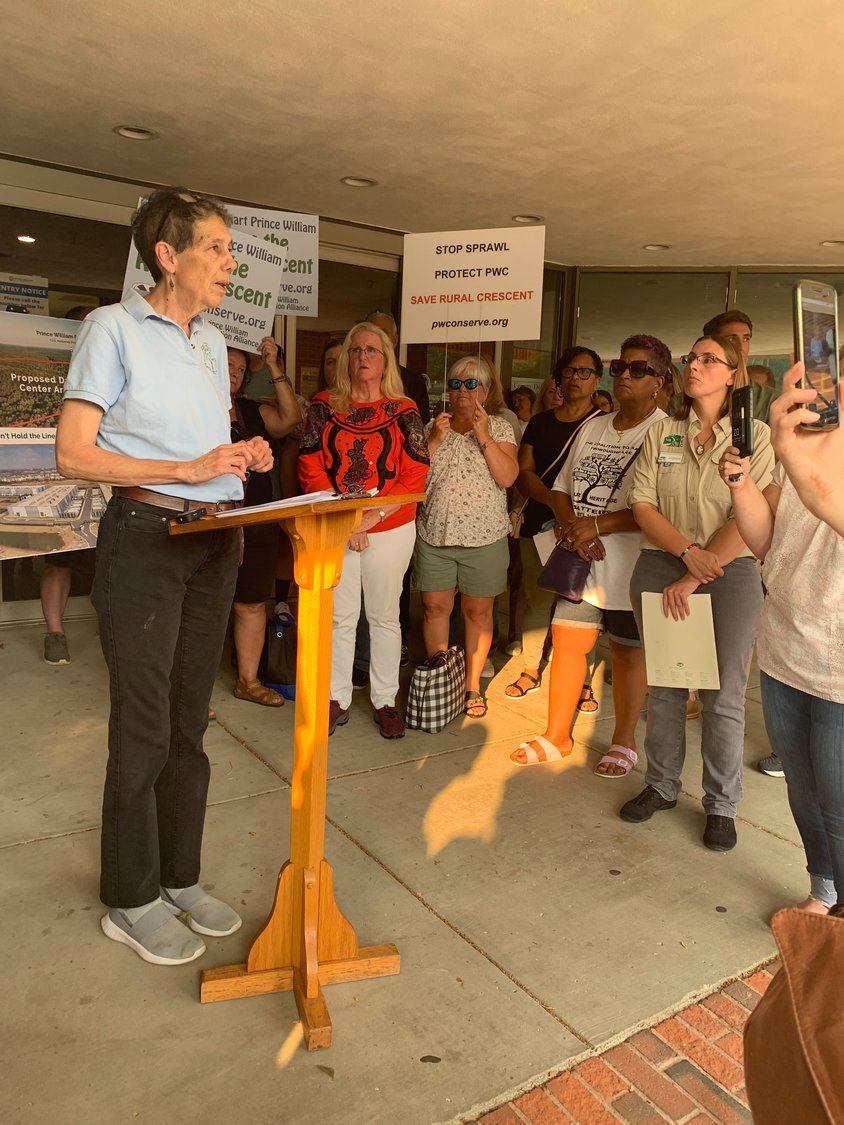 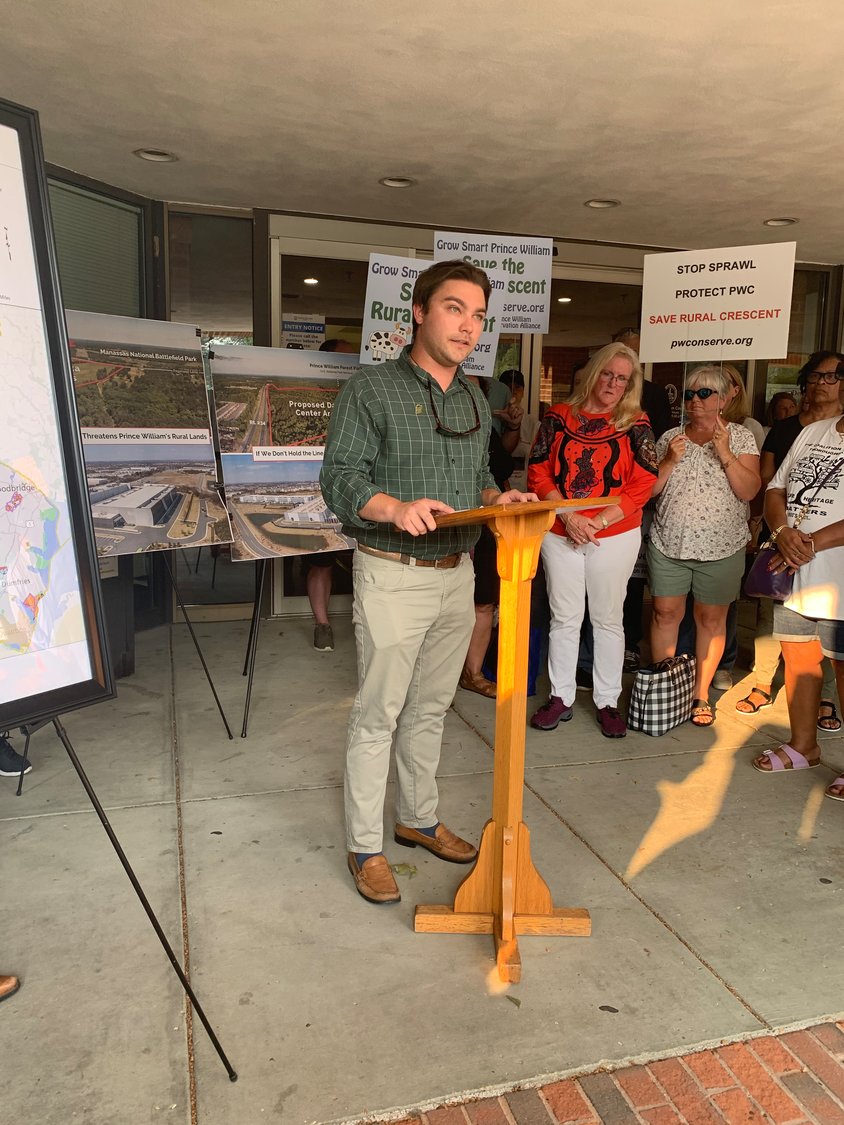 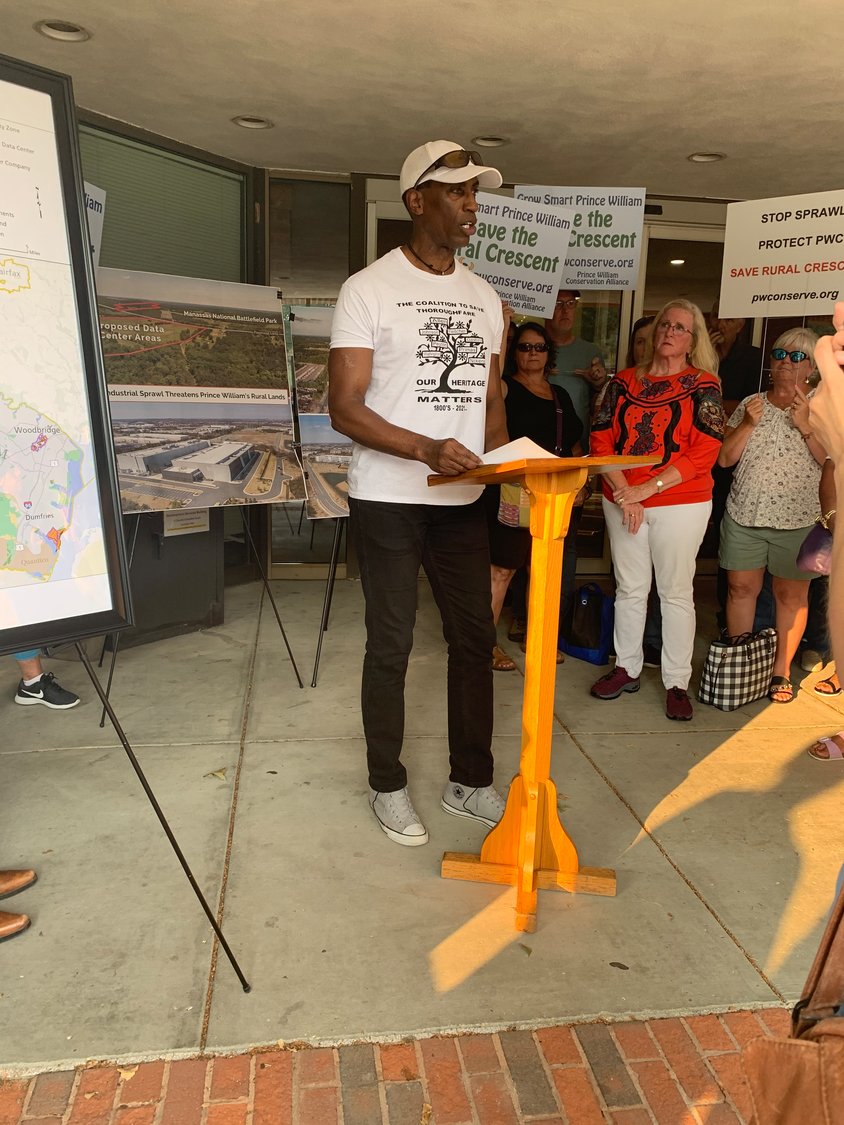 Frank Washington, Chair of the Coalition to Protect Historic Thoroughfare, explains that history and heritage of the county should be preserved.
Bristow Beat 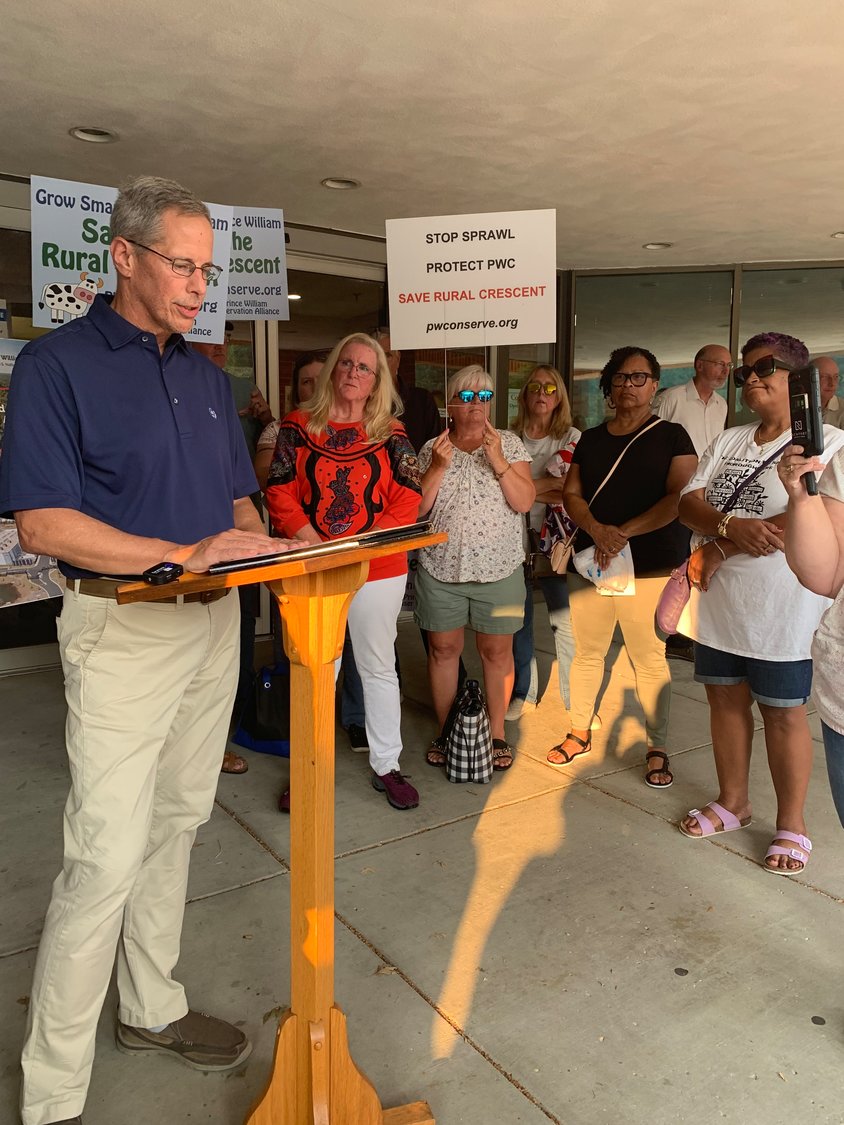 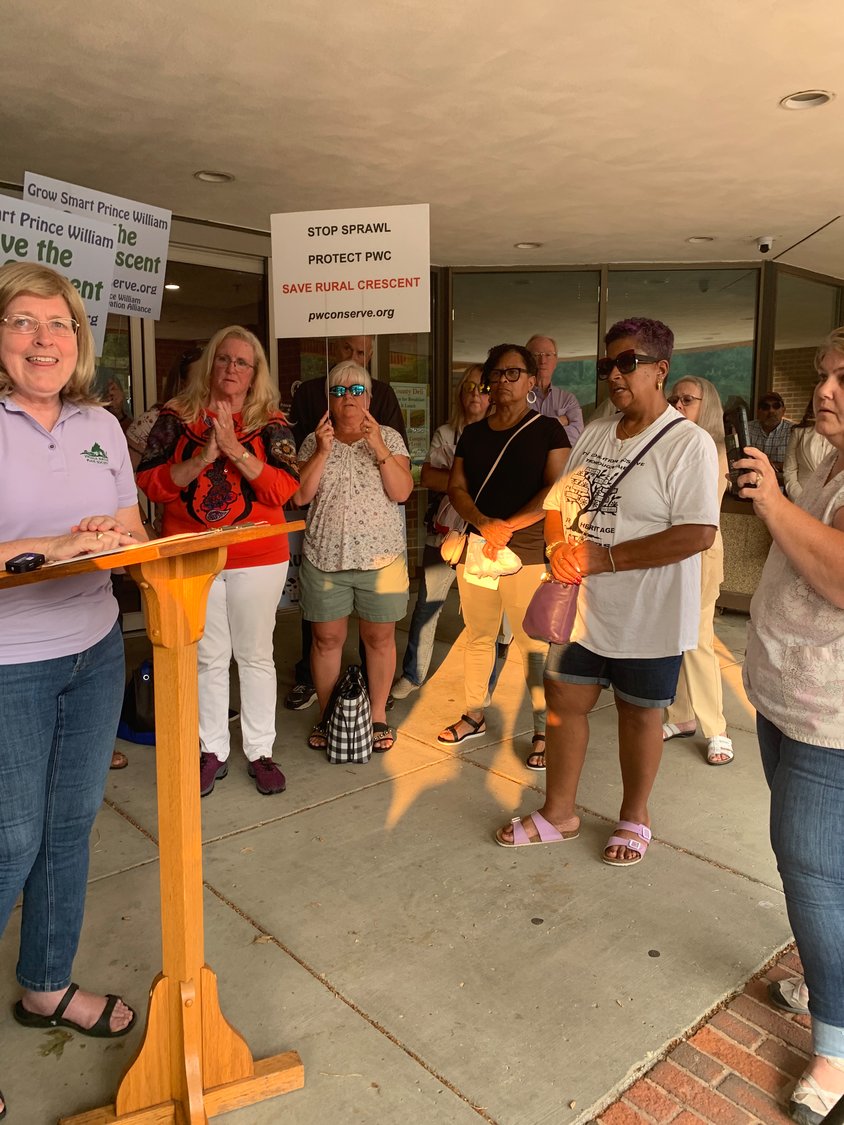 The National Parks Conservation Associations and six other conservationist organizations gathered on July 20 to declare their opposition to proposed data center to be built on lands near and adjacent to national parklands in Prince William County.

Last night the Prince William Board of Supervisors, via a 5-3 vote, approved the beginning process of amending the county's comprehensive plan so to consider the  future rezoning 800 acres in the rural crescent along Pageland Lane.* The amendment opens up the possibility that data centers could be located along parcels of land near the  historic Civil-War battlefield.

The media conference was held outside the Prince William County McCoart Government Building at 6:30 p.m. where the Prince William Board of County Supervisors would approve changes to the comprehensive plan. These changes would allow data centers to be built  near the Manassas National Battlefield along Pageland Lane and Prince William Forest Park.

The National Parks Conservation Association provided a joint statement on behalf of the various participating organizations.

“Tonight, the Prince William County Board of Supervisors will vote on whether to initiate changes to the county comprehensive plan that would allow property owners to convert hundreds of acres of rural land for potentially massive new data centers."

“Allowing data centers on this land would pose a significant threat to two nearby national parks, Manassas National Battlefield Park and Prince William Forest Park, as well as the integrity of the rural crescent. Manassas National Battlefield Park staff have already expressed serious concerns about the impacts to historic viewsheds in this more than 80-year-old national park."

"Prince William County’s rural landscape is filled with history and character and supports the local tourism industry. To clutter the parks’ boundary with gigantic, notably noisy facilities would be a mistake."

“There is no need to build data centers here, in Prince William County’s protected rural crescent, a bastion of green land in a rapidly urbanizing area. There is plenty of land already available in Prince William for data centers, so why bulldoze green space, disrupt local wildlife, and threaten national parks to build them?"

“We certainly do not oppose building data centers where they will have minimal impacts on the county's historical, recreational and natural resources."

“Once this type of damage is done, this landscape will never be the same. We urge the Board of Supervisors to consider alternative areas for potential data centers, on available, appropriate land, away from our invaluable national parks.”

At the press conferenc,e speakers argued that to have build data centers so near the National Battlefield would obstruct the view shed thus diminishing the historic and rural character of the region. This changes could negatively affect the tourism industry in the county- a multi-hundred million dollar industry- and harm national historic and natural treasures.

Kyle Hart, Mid-Atlantic Field Representative with the National Parks Conservation Association  noted that 560 million people visit Bull Run Park and more than 30,000 people visit Prince William Forest Park annually, which is the “largest protected area in the D.C. Metro region.” They are estimated to bring 700 million in economic output to the region by attracting tourists who then spend money in the area.

Currently the rural lands adjacent to the Battlefield help visitors imagine the landscape as it was during the Civil War. Large data centers hinder that view.

Frank Washington, Chair of the Thoroughfare Coalition to Protect Historic Thoroughfare, a historical African American settlement in the Gainesville District, likened historical preservation to a generational wealth for families and all Americans. By protecting places such as the National Battlefield, which just celebrated its 160th anniversary, the county helps pass on the story of our American experience.

Over the past year the Prince William County Supervisors have approved new data centers outside the Data Center Overlay District. Chair Ann Wheeler and the others Democrats on the board have approved the data centers  despite opposition from the Republican supervisors from the Brentsville, Gainesville and Coles District.

This article has been updated July 21 at 7:30 p.m. to include comments from speakers at the press conference.

*The board did not rezone the land designation, but initiated the process towards the possibility of rezoning.