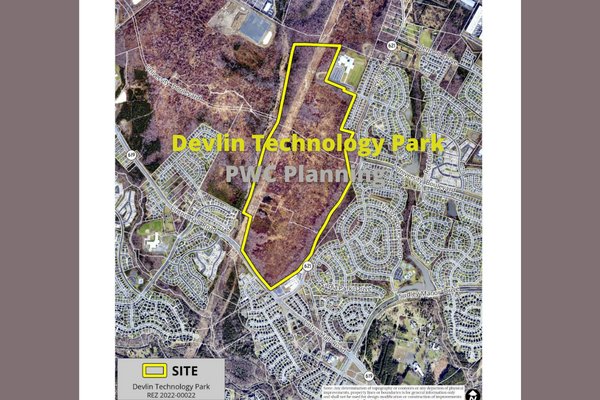 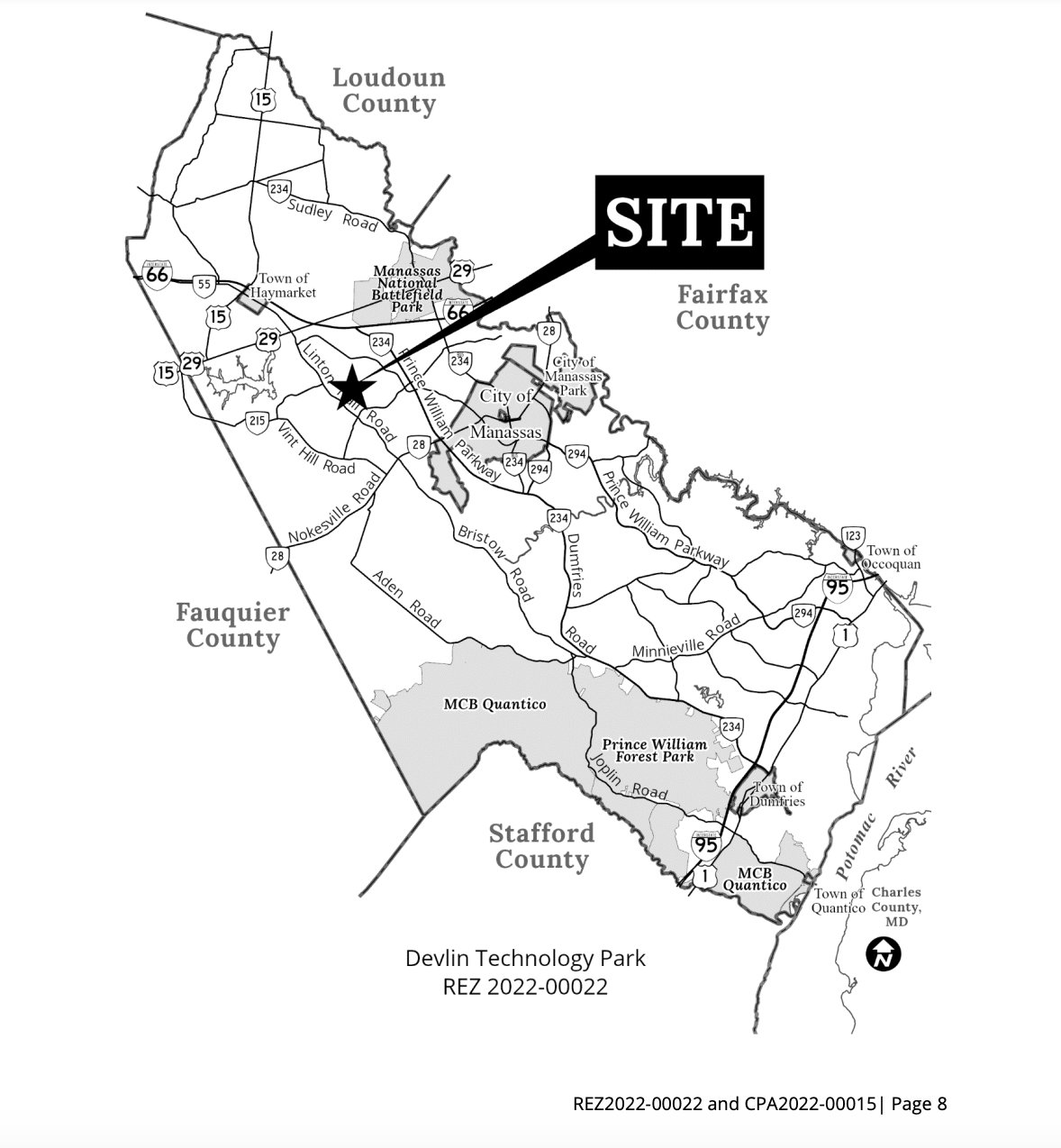 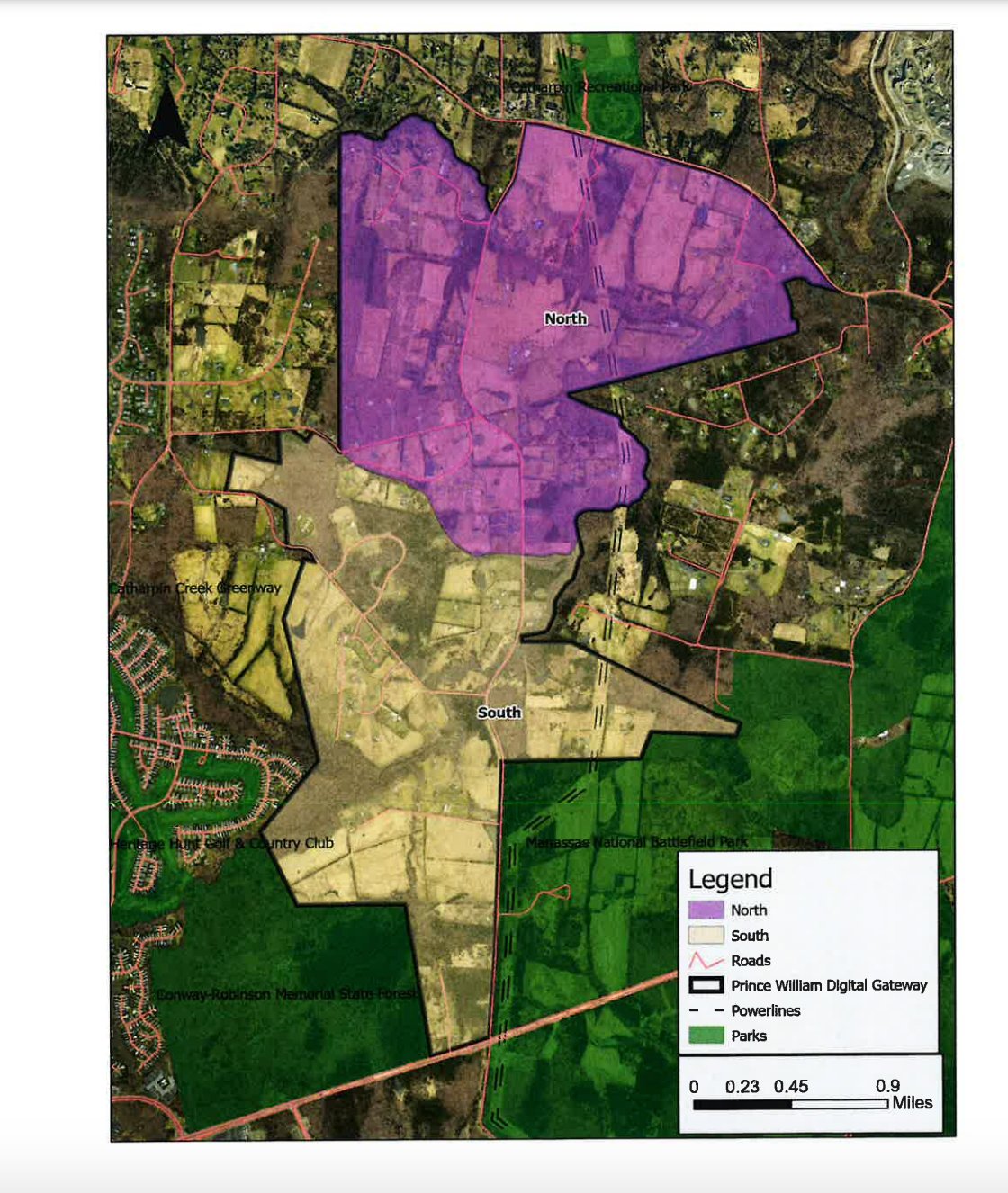 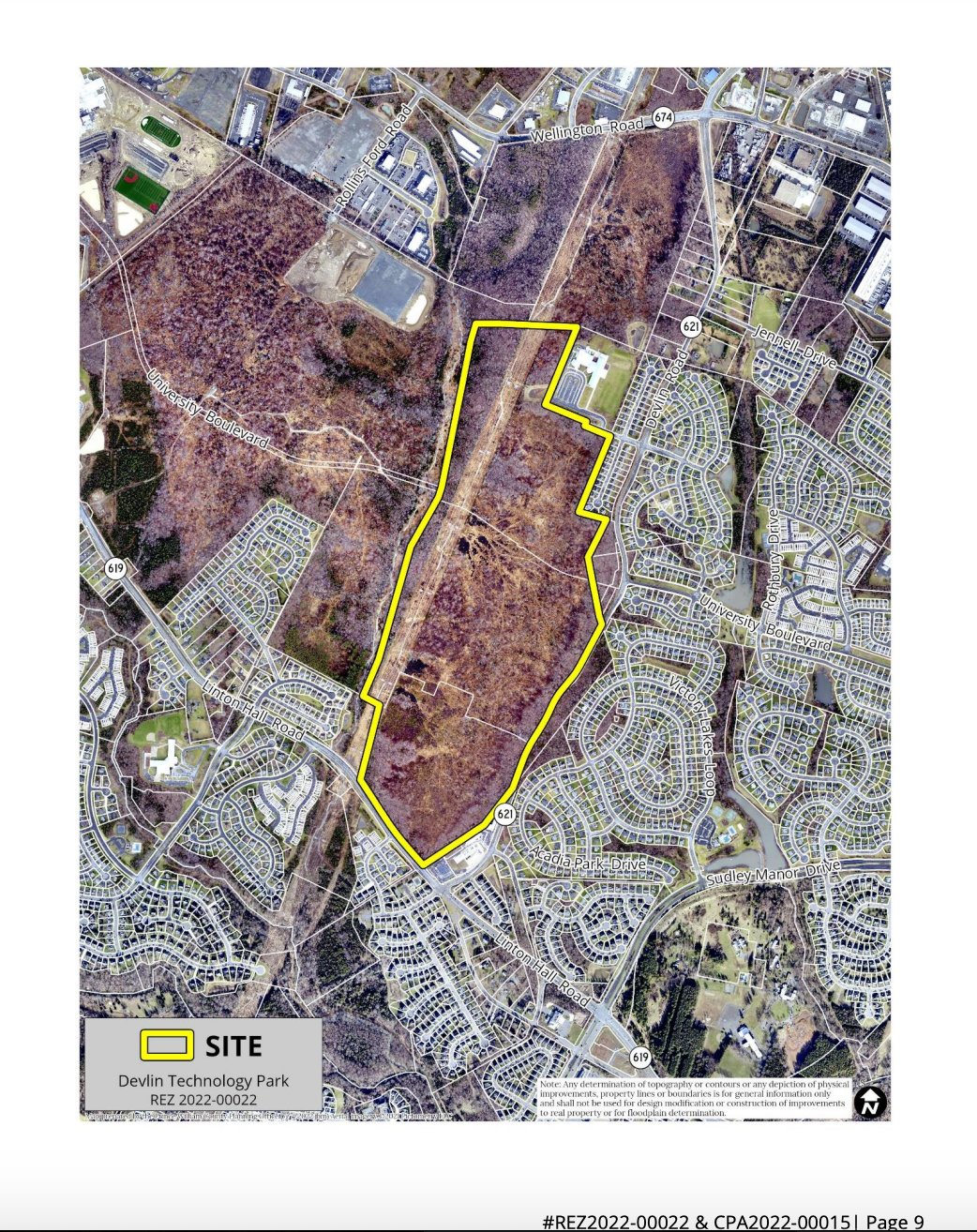 The Prince William Planning Commission recommended the rezoning of 270 acres in Bristow from residential to light industrial to make way for the Devlin Technology Park located between Devlin Road, Linton Hall Road, and extending to Fog Light Way. It passed 7-1, last week with the Gainesville Commissioner casting the descending vote. The property is located in the Brentsville Magisterial District.

Should rezoning and the project be approved by the Prince William County Supervisors, it could house several data centers on three sub-stations - all within close proximity to residential neighborhoods and three elementary schools.

Many neighbors, who expected a residential community of 519 homes, are not happy about the new development and have begun organizing to oppose the rezoning. Upon hearing that the Park could house as many as 11 new data centers, as reported by the Prince William Times, alarms went off for residents.

The property is not currently zoned for data centers. Supervisors would need to rezone it from mixed-use low-density residential to light industrial and environmental resources, and revise the Datacenter Overlay District. The Planning staff recommends those changes, saying light industrial is a compatible use of the property.

Moreover, the property is adjacent to another property behind Piney Branch Elementary School slated for its own data center park.

History of the Property

The property was first owned by the EV Hunter Trust. Owners planned to sell it to developers to build a residential community called ‘Stone Haven.’ Stone Have, proposed in 2014, would have consisted of more than 1,000 single-family homes and townhomes, a small business section, and 30% open space and trails.

It required that the land be rezoned from agricultural to mixed-use residential, which fit with the surrounding neighborhoods. Community members took an active part in designing the community, but residents by and large still opposed it, while the business community welcomed it.

Residents had little appetite for any new residential projects at that time. Schools were over capacity. Patriot High School and T. Clay Wood had just opened, Chris Yung Elementary had yet to be built. Residents knew that more schools were still needed.

The Board of County Supervisors followed Brentsville Supervisor Jeanine Lawson’s recommendation, and though the land had been rezoned, rejected the proposal that had been set in motion by her predecessor Wally Covington.

Then in 2020, Stanley Martin Homes settled for building only 519 single-family homes. Lawson and some residents were still unhappy, and Stanley Martin dropped the application that seems posed for approval (possibly to hash out a new deal.)

One data center park is already planned for behind Piney Branch and Amberleigh Station near Gainesville High School, and Gainesville Middle School on the previous Hunter property.

Today, with data centers a focus for the board of county supervisors, it is not surprising to see them propose more along Devlin Road. Having new data centers checks multiple boxes economic boxes. They are a target industry for the county. The area which abuts large high power lines makes a serviceable location. Data centers bring tax dollars, while not requiring many services, especially not schools. Some estimate it could make Prince William more like Loudoun County by improving public education funding.

Acknowledging how close the tech center would affect residents, the planning staff created several mitigations. The first is scaling back the 105 height of the data center to 80 feet with a 700-foot setback or even to 60 feet.

According to planning documents, a solid wall or screen would be erected to muffle the sound. Where data centers can be seen, the facade must be made of brick, stone, or stylized metal design. The applicant would preserve a 100-foot existing pine tree buffer along Linton Hall Road and Devlin Road and plant a 50-foot buffer along Fog Light and Amberleigh Station, which is located in front of the property on Linton Hall Road.

For recreation, the applicant will provide open space and a natural surface pedestrian/bike trail, which could possibly connect to the Broad Run Trail.

The applicant would pay for road improvements including an extension of the southbound Devlin Road left turn lane to Linton Hall Road and would pave a sidewalk along Linton Hall Road to the Amberleigh Station community.

The applicant is responsible for creating the right-of-ways on to the property, utilities and stormwater management. The applicant would be paying for signal lights and a bus shelter, should they be required.

However, similar proffers came with the residential proposals that did not involve data centers. Stone Haven had even proffered land on which to build Gainesville High School.

While neighbors appreciate mitigations, they still have serious concerns. One such concern is the construction noise that could continue for years since there are many new data centers coming to the area.  Construction noise from the two data center parks on the former Hunter property would be heard from schools, such as Chris Yung Elementary, and possibly Gainesville High School, Gainesville Middle School, and Piney Branch Elementary School.

But more important, perhaps, is the constant ‘hum’ sound from cooling systems used at data centers. Once data centers are fully operational, the noise would be constant.  Residents in opposition say that is not compatible with land use.

Gainesville resident Dr. John Lyver, a 25-year NASA scientist launched his own study, complete with charts and maps, which he then shared with the county.

Lyver, who met with Bristow Beat on Aug. 11,  said the noise would extend out via a two-mile radius. Noise will be heard from the aforementioned schools as well as Bristow Run Elementary and Victory Elementary. Noise from other data centers would be heard throughout Gainesville, Haymarket, and south Manassas.

The noise levels will fall between 60-72 dBA.  Bristow Run Elementary Schools, located just off Linton Hall Road at Worthington Drive, would increase its Db from 47.8-69.7, but that is a 16,000% increase by his calculations.

Could walls muffle that sound? Lyver is doubtful. They would have to be 6-stories tall. Wouldn't it be better not to build data centers in neighborhoods, he proposed.

Bristow residents of different communities are forming a united front to oppose the data centers. Those residents want Supervisor Lawson to know this is not what they want for their community. They appreciate she fought for mitigations, but to them, the use is completely incompatible.

Community organizers have also begun coordinating with Gainesville residents as opposed to the Digital Gateway proposed in the Catharpin area. HOA Roundtable of Prince William County has involved its organization in opposing new data centers in western Prince William.

Dr. Steve Pleickardt,  President of the Amberleigh Station HOA, is one of the most aggressive advocates against the newly proposed data centers. His neighborhood is at the nexus of two data center parks. He believes it could make his community unliveable.

Pleickardt says he is extremely disappointed, feeling that the Democrats on the board have consistently ignored what residents want in favor of data centers.

“I’m very angry at the lack of response from the Democratic supervisors to protect the public from environmental harm and industrial intrusion into our quiet suburban Bristow and Gainesville neighborhoods,” said Pleickhardt.

As such, he has encouraged Amberleigh residents to support the effort to Recall Ann Wheeler, which is based on her stock holdings in data center-related companies during her time in office.

“Ann Wheeler was smirking at all the people who came out against data centers- at the BOCS work meeting. It just infuriates even more!” Pleickhardt wrote in an email. “We are having a  'RECALL ANN WHEELER’ sign-up event Saturday from 3-5 with other Amberleigh Station Board members. I am so exhausted trying to protect my 400 residents of our community including school children.”

There is also the question of whether Dominion Power of Virginia even has enough power to serve all the proposed data centers. According to a Loudoun Now in an article published last week. entitled  “Dominion Warns of Power Crunch for New Ashburn Data Centers.”

In a phone interview with Bristow Beat Chair Ann Wheeler responded that the issue seems to be limited to Loudoun County, but she has given a directive to look into it.

Wheeler believes that the negative responses are coming from certain people, but by and large, she has not received a lot of pushback from Bristow residents. Residents did not want the 519 homes to overcrowd schools, and unfortunately having the land sit untouched is just not an option.

She said that data centers appear to be the best option as they will bring in millions in tax revenue for the county, and she would think people would want that.

*This article was updated on Aug. 4 at 5:25 to include comments from Chair Ann Wheeler.

*This article was updated again on Aug. 12 around 3 p.m.. to include information gained from a meeting with Dr. John Lyver.