Enjoy Live Music, Celebrate Summer at Out of the Blue 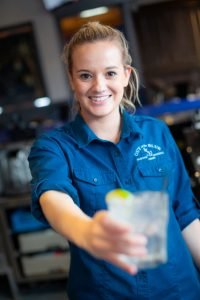 Server presents a cocktail at Out of the Blue.

It’s passed the Summer Solstice, the kids are out of school, and so it can only mean one thing: it is officially summer!

How do you celebrate when you are in town? We suggest dinner, lunch or drinks at Gainesville Out of the Blue, Crabs & Seafood.

Enjoy $5 Drink of the Week cocktails on the patio and freshly caught crabs with friends. You’ll feel like you are on vacation while singing along to“There’s No Place Like Home”.

“It’s been a really good summer so far,” said owner/operator Ryan Pell. “There has been fantastic quality crabs and plenty of them.”

They also had a stellar springtime. According to Pell, Mother Day, Memorial Day and Father’s day were great successes as well.

“I really want to thank everyone who chose to spend their holidays here with us. It means a lot,” she said.

Live Music on the Patio: The Kites 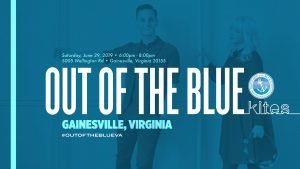 The Kites will perform at Out of the Blue, Saturday evening.

This weekend is the first time that the restaurant will host live music on the patio. Saturday, June 29, from 6-8 p.m. The indy-folk band The Kites will be performing.

The Kites, is a husband and wife team from Kentucky, composed of Jo Jo Stephen and Leah Hatmaker. They describe their music as “ambient folk," but also cover some 90's alternative hits.

The Kites are performing at several venues in the greater Gainesville area, plus a show the district, this week. Visit kitsofficial.com for show times and venues.

Pell said she heard about them through the HGBA and thought it was a “great way to give live music a shot.”

“If it is successful I’d like to do it again, and have more live music on the patio this summer and fall,” Pell said. 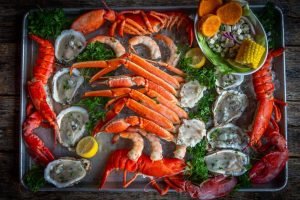 Seafood at Out of the Blue is a wonderful way to celebrate our independence.

Independent Day with Out of the Blue

Out of the Blue is preparing for more holiday celebrations. Independence Day is usually a big day for carryout orders of crabs and shrimp, as OOTB caters backyard parties.

Pell suggests calling in carryout orders several days in advance so they can stock up.

People also come out on 4th of July to enjoy OOTB's seafood, drinks and two outdoor patios. On days when the second patio is open, patrons can order drinks directly through the window that connects to the lounge bar.

Call ahead for seating to receive priority seating over walk-in guests.

“We will do our best to get you seating at a preferred time,” she said. 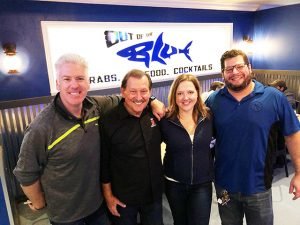 Owners of MurLarkey Distillery with Ryan and Danny Pell, during the last Tap Take Over Thanksgiving Eve Party.

Ryan and Danny Pell are also very excited to celebrate the 2-Year Anniversary of the opening of Out of the Blue. They will hold a Prince William Chamber ribbon cutting on July 17, since they never held one upon their opening.

Ryan said she wants to make the party not about them, but their patrons, the community and business partners who have supported them during the past two years.

OOTB will be offering a $2 specials for a few hours during the day TBD. Those interested can check with events on Out of the Blue's Facebook page.

June 27 is the last day for the carry-out special of ½ Bushel of medium blue crabs, 1 lb of our jumbo steamed shrimp, and a basket of hushpuppies for $119. (Carry out only.) And also, the Diamond Special: with a $20 purchase, buy one get one Jumbo Steamed shrimp by the pound or ½ lb.

Out of the Blue also have two private rooms for parties, such as wedding showers, business events or family reunions. Call for info.

Out of the Blue Crabs & Seafood is located at 5005 Wellington Road in Gainesville in the Virginia Gateway Shopping Center.