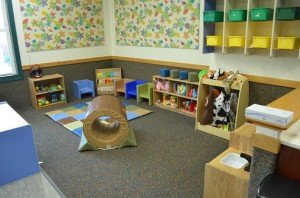 There are plenty of places for two and three year old children to play while at school.

Willowcreek Academy day care center in Gainesville terminated the employment of a staff member because an infant had been given the wrong bottle of milk.
"The child received a bottle containing a combination of breast milk and whole milk that belonged to another infant in the classroom,"  Virginia Department of Social Services Inspector Debra L. Albritton wrote in her report. The center's administration said they released the woman as a direct result of this incident. "She was terminated solely due to the violation of licensing; there were no other incidents,"  Willowcreek Academy Gainesville Director Krystin Kiehnau said. "We have high expectations we uphold and my staff know that Virginia licensing standards are the minimum requirements at Willowcreek Academy." Kiehnau contacted both sets of parents and reported the incident to DSS. "When we fail to meet the Licensing minimum standards, we contact the parents of any child involved and the Willowcreek Academy director notifies Licensing in the form of a 'self report of a licensing violation,'" she said. As a result of the self-reported incident, DSS cited the center for not ensuring the care and protection of children. "Staff will now use MAT standards of administration for all bottles; they must match face to name from bottle to cubby picture and name, then again to child before feeding," Willowcreek admoinstrators said in response to the incident. "All bottles are color coded to each individual child."