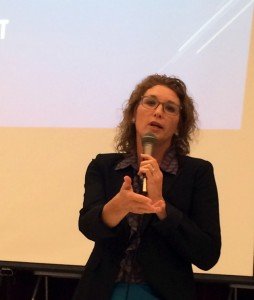 Supervisor Jeanine Lawson (R-Brentsville) said she opposes clustering in the Rural Crescent, but is not opposed to the county purchasing development rights to protect rural land via an easement, at her Thursday night town hall meeting.

Clustering is an option to preserve open land in the Rural Crescent through clustering homes together and leaving the majority of the land open to agriculture. An easement is a legal way to preserve land for perpetuity.

The Rural Crescent is a large portion of Prince William County that does not allow for commercial or dense residential development. In 2013-14, the supervisors had the consulting firm Environmental Resources Management conduct a study on how, going forward, they should designate land in the Rural Crescent. The study suggested several ways to preserve the rural land, and in some cases, also development it.

Tools they suggested for planning include clustering and easements.

Lawson, saying she has always been a big proponent of the Rural Crescent, told residents she does not think clustering is a good option for it. She said it would bring in more homes, more people, more traffic, and thus, require more infrastructure and higher taxes: the very things many rural residents are adamantly opposing.

“What is the problem today that we want to solve?” Grymes asked the audience. “If we want to change our current status [in the Rural Crescent], what problems are we facing?”

However, Lawson recognizes that there are people living in rural Prince William who would like to sell their land to developers. In those cases, Lawson prefers the county buy the development rights, so that landowners could make a profit, and the county can preserve the land via an easement.

Virginia has a new program by which the Commonwealth will pay half for a preservation easement if the locality pays the other half. According to Ryan Foster, the Community Development Manger for Prince William County Government, there are other programs the county could utilize as well.

When development rights are sold, the land goes into an easement, which preserves the land for perpetuity. While the supervisors could possibly revoke the Rural Crescent’s land designation status, one day, opening it to development, an easement is a much more secure way to conserve land.

An easement also protects land from being taken for public use such as road expansions or power lines. Additionally, when land is put into an easement, the landowner can still operate most agricultural enterprises according to the land designation.

The downside of purchase of development rights is it requires public funding.

Lawson suggested using funds the county receives when big landowners pay back their tax deferrals. She said the agricultural use-value taxation fund is not huge, but in some years can yield a few million dollars. Additionally, she suggested possibly using money from the county’s General Fund.

Lawson said an ordinance would have to be passed to and certain criteria met, but nonetheless promoted purchasing of development rights as “a tool that we can use to help preserve farm land in the rural crescent.”

Lawson did not advocate for the transfer of property rights. A TPR would allow land owners to sell some of their property rights directly to developers who could then apply them to another area within the jurisdiction.

This method might protect the Rural Crescent, but at the cost of increasing development density elsewhere. This could work if the supervisors felt there were areas where they wanted to increase density. For instance, if they wanted to bring condos or apartments into an area designated for single-family homes because, it might be appropriate.

Residents in attendance seemed pleased with the idea of purchase of development rights. Many said that preserving the Rural Crescent was their priority. They were unhappy that the line between the Rural Crescent and development area had been increasingly blurred in recent years by the introduction bigger roads, HOA developments, large schools and large religious institutions. They thanked Lawson for really listening to their concerns.

Residents asked that Lawson ask the other board members to give the Strategic Planning Commission the ability to discuss land use, saying it affects all other areas such as traffic, education and economic growth.

She agreed, saying she would bring it up to the board.

Other issues discussed at the meeting will be addressed in subsequent articles.