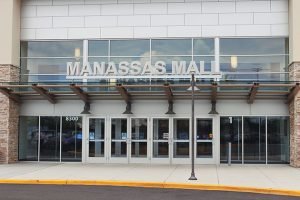 The Manassas Mall at 8300 Sudley Road in Manassas, Virginia is for sale.

Manassas Mall is owned by Pyramid Management Group and is being sold through the commercial brokerage firm JLL.

Older anchor stores include Macy*s, Walmart and Sears (closing across the country.) They are not part of the sale according to Washington Business Journal. At Home, is another anchor store that is part of sale.

The mall has a number of new restaurants, mid-sized stores, such as H&M, smaller popular retail shops and a food court.

The mall is located within the 15-mile radius of the Gainesville area, described as “a well-heeled, densely populated trade area with approximately 1 million residents and an average household income exceeding $149,500.” 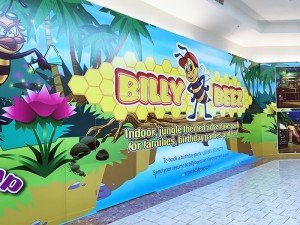 Billy Beez is one of a several new tenants that opened in the Manassas Mall a few years ago.

Malls have been struggling as people have shopped more and more online. The Manassas Mall also competes with outdoor retail “malls” such as The Promenade and Virginia Gateway in Gainesville (Peterson Companies) within a new suburban high-income growth area or the county.

But new entertainment stores at Manassas Mall are largely unique to the area.

The other large mall in Prince William County is Potomac Mills, located in Woodbridge on the eastern side of the county. Potomac Mills has restaurants and a movie-theatre, but it is also a factory-outlet store and its anchor stores are different.

There are other many malls within the D.C. suburbs outside Prince William County.