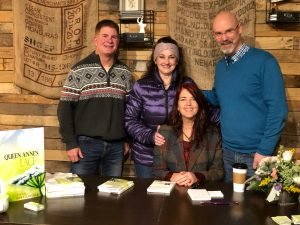 Dawn Gardner signs copies of "Queens Anne Lace." She is surrounded by her daughter Rachel Dugger, brother and friend.

The novel is a coming of age story about Lacy, a 14-year-old girl in the 1970s, who escapes an abusive father and discover the truth about her family.

The descriptive and suspenseful novel has quickly become a favorite among readers.

The book has been 12 years in the making for Gardner, who said it was born out a life crisis. Diagnosed with an illness that could have been fatal, Gardner braced for the worst.

“I thought I was going to die. When I came out of it, I think I was a few chapters in." After recovery, she decided to make significant life changes. “You know, I’ve gotten a second chance; I’m going to live. That was a catalyst for a lot of things," Gardner explained. "I thought - I’m done living small."

So she took some big risks. 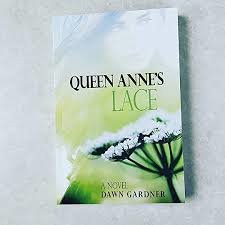 She divorced her husband. She continued her novel, waking up around 4:30 a.m. every morning to write before her girls went to school. She started her own business, DG Photography, building upon her years in design and marketing.

The writing process was made easier with the collaboration of a community of local writers. However, after one rejection (that said it did not match the publisher’s brand), a little doubt set in, and life took over.

Gardner literally put her book on the shelf and focused on raising her girls and growing her business. “I thought I had to make my way financially.” But she did not forget about Lacy’s story.

“Sometimes when I was cleaning, I would pick up again, and then self-doubt sets in. There is a fear of releasing your artwork into the world.”

But being a photographer strengthened that muscle, and over time emboldened her. 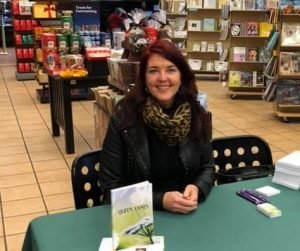 DG Photography provided an outlet for her creativity, and she grew also as a businesswoman and an artist.

The mission behind her photography became to empower individuals, especially women, and to have them see their best selves. It was time to live that truth. She reopened the book.

As she was thinking more and more about publishing, a writer friend told her how the industry has changed. Now, many great authors begin by self-publishing and find a wide fan base that way. Gardner decided to give it a try.

Returning to the book was a labor of love, and she collaborated with her daughters. One became her editor, the other her marketer. More confident than before, she still had butterflies in her stomach as she released her book in October of 2019.

“When you finish, I don’t know if I can put it into words. There is such a sense of accomplishment, finality. When you actually publish it you get all those sensations all over again, and a little shot of fear. You’re also putting your art into the world.”

But “Queen Anne’s Lace” has been extremely well received, earning 5 stars on Amazon.

Gardner is still elated that the book has been published, but she said any money she makes from it is just icing on the cake. She realizes a life-long dream and wants to share it with as many people as possible.

Like Dawn, Lacy undergoes a transformation that had to be earned. She leaves behind an abusive childhood and experienced enough to define herself as her own woman.

Dawn said the story is not biographical, it’s Lacy’s story, but it has roots in her experiences. “I think I would be doing a disservice if I didn’t admit that I experienced some of this in my own life.” She said she felt in her heart it needed to be told.

“Abuse is a hard topic,” she said. “Lacy isn’t me but I felt those feelings before.” Writing the story was healing. It warmed her heart to gain compassion for her own father, trying to understand his complexities rather than just his flaws. 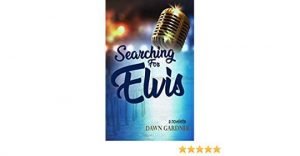 Dawn Gardner also wrote a novelette, "Searching for Elvis," that is also available on Amazon.

She believes the story will resonate with many people because for most of us, breaking away from family is a rite of passage. And we face the darker parts of our experiences to see them in a new light.

Readers describe “Queen Anne’s Lace” as a page-turner. People say they are captivated with it, especially those who don’t often read novels. They find it both complex and comforting.

But Gardner said the best compliment is when people say they are moved by it.

But she assures people her writing is also amusing. She enjoys quirky characters, suspense, and family dynamics. She enjoys exploring different times and places.

Gardner remains elated to have shared the stories in her head with others. She is working on two other books she hopes to quickly bring to market.

Dawn Gardner is the Featured Guest on Episode 2 the Podcast: Flushing It Out With Samantha Spittle in which she talks to Samantha about "Changing the Story You Tell Yourself"

Samantha Spittle is a Nokesville woman who started a podcast talking to inspiring everyday people. She encourages them to share their wisdom, compassion and create a sense of connectedness.

She calls herself "the introvert's extrovert." She talks to people, so you don't have to... For now.