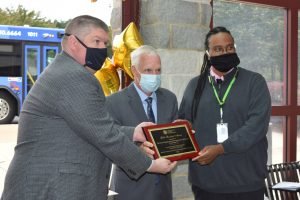 The award is the top recognition TSA can give to a transit agency for demonstrating outstanding performance in enhancing their security programs. OmniRide is the first and only bus-only transit system in the National Capital Region to earn this recognition.

“To be recognized across the transit industry as a leader in security is an honor,” said Schneider. “Being in the D.C. region allows for us to play a unique role. We are tasked to focus on the movement and security of many of our nation’s workers who travel to the Pentagon and into the Capital every day. We don’t take that responsibility lightly, and for the TSA to acknowledge that is a tribute to what we do every day.”

BASE stands for Baseline Assessment for Security Enhancement and was developed by the TSA’s Surface Transportation Security Inspection Program and the Office of Security Policy and Industry Engagement office. The BASE compares a transit agency’s internal security processes, procedures, and policies against TSA and Federal Transit Administration security recommendations. 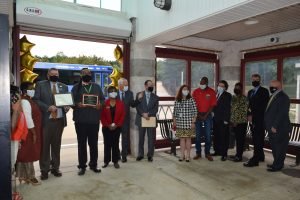 This is done through a voluntary annual review of 17 categories of security and emergency preparedness elements. These categories include a review of topics such as an agency’s Written System Security Plan and Emergency Response Plan, Security and Emergency Training Program, Public Security and Emergency Awareness Program, Risk Management Process, Threat and Intelligence Information Sharing Process, Tabletop and Functional Drills, and Physical Security Inspections. The criterion for achieving the “Gold Standard” in security is attained by an overall average score of 90 percent in each category evaluated.

Johnson said, “Each year the TSA awards the ‘Gold Standard’ to a very select few transit agencies and only to those who score very high in TSA’s Baseline Assessment and Security Enhancement (BASE) audit.   TSA is proud to acknowledge that OmniRide and TSA have developed an excellent partnership over the past eight years and together they have worked very hard to improve the security baseline for their system and passengers they serve.  Over these same years, four separate BASE audits have been conducted, with OmniRide scoring higher each time.”

Johnson continued, “OmniRide’s diligence and dedication to security improvements and their partnership with TSA serves as a model for the entire transit industry. The results speak for themselves.”

OmniRide is one of only three transportation providers to win a Gold Standard Award this year. Additional winners are Oahu Transit, Inc. and Go Triangle, which operates in North Carolina. Past recipients from the Northern Virginia and Washington, D.C. region include the Washington Metropolitan Area Transit Authority and the Virginia Railway Express.

OmniRide would like to publicly thank Byren Lloyd, OmniRide Manager of Safety and Security, for his commitment to making the security of passengers and employees the #1 priority at OmniRide. It is through his leadership that OmniRide was able to receive this honor from the TSA.

For more information contact Customer Service at 703-730-6664 or visit www.OmniRide.com.

The Potomac and Rappahannock Transportation Commission (PRTC), operating as OmniRide, provides a variety of services in Prince William County, Stafford County, the City of Manassas and the City of Manassas Park including: OmniRide Express and OmniRide Local bus routes; OmniRide Ridesharing for the promotion of carpools and vanpools; and OmniRide Employer Services which helps businesses to implement and expand commuter benefit programs. PRTC also co-sponsors the Virginia Railway Express in partnership with the Northern Virginia Transportation Commission.