LETTER TO THE EDITOR REGARDING DIGITAL GATEWAY 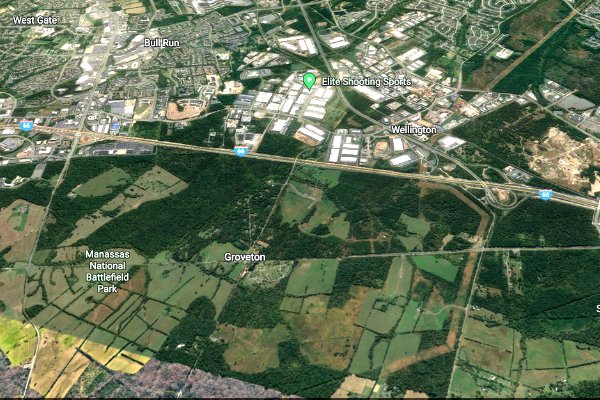 The Digital Gateway is proposed to run along Pageland Lane, between the Manassas Battlefield Park to the north (left) and Conway Robinson State Forest to the south (right.) The bottom of the photo is the section of Gainesville located in the Rural Crescent. Across I-66 (top) to the east is the industrial and suburban areas of Gainesville and Manassas to the north (left).
Google Earth map around Pageland Lane, Gainesville
Posted Tuesday, March 29, 2022 12:07 pm

The question of why the Rural Crescent was established nearly 25 years ago is highly debated. Some claim it was to limit population growth, others have said it was to protect the Occoquan watershed, and some say it was to concentrate infrastructure development to a smaller portion of the County thus alleviating the tax burden on residents. Regardless of the intent, none of the outcomes hoped for have come to fruition.

Our county has continued to grow into the 2nd most populous county in the Commonwealth which has saddled us with overcrowded roads, bursting schools, a residential tax bill that keeps growing, and an Occoquan reservoir that has seen the levels of salinity and sedimentation rise faster than expected due to both point and nonpoint source pollution.

The Rural Crescent is a lazy, blunt force instrument implemented where a scalpel would have been more effective. Its most vocal advocates include privileged landowners wanting to protect their viewshed by restricting the property rights of their neighbors, special interest groups and neighboring jurisdictions that put their own interests first above the interests of Prince William County.

The restriction of one house per 10 acres and lack of an effective cluster ordinance has fostered by-right development over a large swath of the County. This policy has kept many of the updated development standards and regulations surrounding environmental protection from being put in place. We have been left with one type of housing: single-family units on large lots. The continued growth of our population and lack of diversity in housing types have led to the current issues we face in the housing market.

The Rural Crescent has also made it extremely difficult to place schools where they actually need to be, but instead, they are placed where the County can find cheap land or land given to them by developers. As a result, we have schools built off highways, near dangerous intersections that can’t handle the pedestrian traffic, and it's why kids have been redistricted into schools that are nowhere close to their neighborhoods.

And finally, the Rural Crescent has created a tax base that is primarily dependent on residential tax bills. This failed policy didn’t encourage commercial growth in the development area but put a premium on housing development. Now we have an unsustainable tax model that has actually sped up the expansion of data centers as the answer to our ticking tax bomb.

We tried the experiment of the Rural Crescent and it clearly failed. Let’s not let a small group of county activists and backyard view protectors, along with their out-of-town allies, continue to burden us with their failed land use policy. It’s time to think of the future. It’s time to remove the Rural Crescent and allow data centers to become the fully realized revenue engine that will benefit us all.

This article is the opinion of the author alone and not necessarily that of the publication or its affiliates.

The author owns property adjacent to Pageland Lane and signed on with her neighbors to sell the property.

Healthcare Workers Urge Virginians to get Vaccinated Against COVID-19