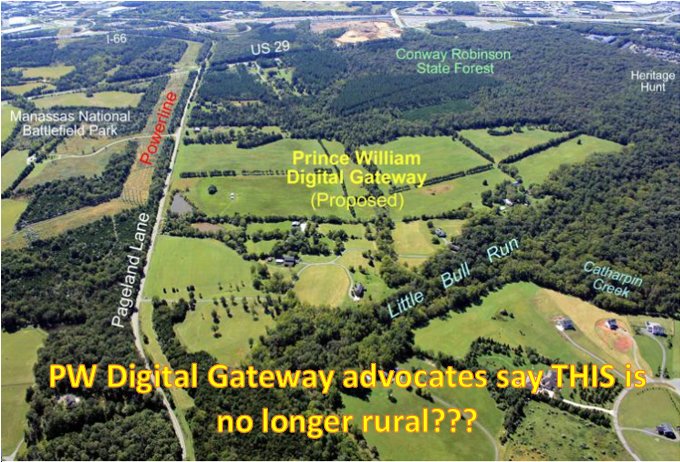 I was extremely disappointed to read Dr. [Babur] Lateef’s letter to the editor of Inside NOVA endorsing the Prince William Digital Gateway proposal and expressed my dismay in my comments posted on that website.

I cannot believe that the Prince William School Board Chairman's endorsement was made with anything but a perfunctory review of the relevant issues.  Anything that generates revenue for the County increases funding for our schools since the County has a revenue-sharing agreement that provides 57.2 percent of general revenue to the school system.  The question of which are the best methods for generating that revenue requires a bit more thought.

Would we so readily support an open-pit coal mine or toxic waste dump to attract more revenue? Or would we weigh their detrimental effects versus any advertised economic benefits?

I have no doubt that the school board has been heavily lobbied by the proponents of the Prince William Digital Gateway to earn its support for this reckless proposal from which they stand to profit.  But such a consequential decision warrants more research than may have been devoted.  No educated consumer would pay a sticker price for a new car after quickly leafing through a glossy sales brochure.  I can’t imagine educators would advise their students to review only the Cliffs Notes version of a book they were assigned to read.  Nor would we advise a student to take a test without studying for it.  Likewise, the school board needs to do its homework. There are ample study materials available in numerous recent news articles panning this proposal.

I have been an ardent opponent of the Prince William Digital Gateway because I know there is a more responsible way to attain the economic benefits of data center development without desecrating environmentally and historically sensitive land.

Sandwiching a 2,133-acre industrial corridor on bucolic agricultural land between a national park and a state forest is not a prudent exercise in civic planning.  The most sensible alternative is simply to put data centers in the designated Data Center Opportunity Zone Overlay District set aside for that purpose only six years ago.

Proponents of the Prince William Digital Gateway have advanced a false narrative of no land left in this area because they want to steer development toward their own properties, which they want rezoned to sell to data centers for maximum profit.  I have repeatedly debunked the myth of no land left in more suitable industrial areas, most recently after the March 9th Planning Commissioners meeting.

There have been numerous negative comments submitted by federal, state and county agencies who have reviewed the Prince William Digital Gateway proposal.  Recently, the Prince William County Finance Department stated that the claimed economic benefits are grossly exaggerated.  It’s likely even the County’s reduced estimate is overstated because it may not account for an accelerated depreciation schedule for computer peripherals and infrastructure costs that will offset revenues, especially in the early years.  It’s quite possible that after considering these additional factors, net revenue could actually be negative for several years.  In contrast, developing data centers in the existing overlay district can be done more readily without the offsetting infrastructure costs and without the resulting environmental damage that is causing so much justifiable citizen outcry.

A recent BisNow article gave us a glimpse into the future.  Some Prince William Supervisors view Loudoun County’s embrace of data centers as a model to emulate.  Now, years into the experiment, Loudoun is having second thoughts.  The lesson to be learned here is that data center development needs to be done thoughtfully and we must diversify our economic development portfolio to avoid putting too many eggs in the data center basket.

Perhaps more important than all of the above is the terrible example the school board would be setting by endorsing such an irresponsible proposal.  If most people learn by example, what are our young people to conclude from those they consider leaders selling out the environment and throwing in with profiteers for a piece of the action after only a cursory review of the facts?  We should teach that responsible leaders thoughtfully advocate for what is right rather than hastily signing up for a cynically promoted sugar high.

Below are my comments on the school board chair’s endorsement of the Prince William Digital Gateway (Lateef: Digital Gateway will benefit schools | Opinion | insidenova.com).

I am stunned at such a simplistic appeal by someone in charge of educating our children.  What happened to the critical thinking you are supposed to be promoting?

Obviously, anything that generates tax revenue helps schools since the Prince William County revenue sharing agreement provides 57.23 percent of general revenue to the school system.  Virtually everyone supports generating more revenue for the County, but there are options for doing so that require more thought than Mr. Lateef has devoted.

Opponents of the Prince William Digital Gateway have argued for months that the choice is not between developing data centers and forgoing the revenue they may produce.  Rather it is a question of the most appropriate LOCATION for them.  Sandwiching a 2,133-acre industrial corridor on agricultural land between a national park and a state forest is not a prudent exercise in civic planning.  Such a boneheaded idea would certainly earn any student an “F”.

Six years ago, the County had the wisdom to establish the Data Center Opportunity Zone Overlay District expressly for this purpose.  There is ample industrially zoned land still left to accommodate data center growth without damaging environmentally and historically sensitive land in the Occoquan watershed.  Development outside the overlay district is driven solely by those who stand to profit from it, and they are waving a piece of the action before Mr. Lateef to earn his support.

The Prince William County Finance Department recently reviewed the economic benefits claimed by this proposal’s applicant and found them to be grossly exaggerated.  Development within the overlay district would yield greater net benefits without causing environmental damage and understandable citizen outcry.

Mr. Lateef should study harder before speaking out on a subject on which he has so obviously not done his homework.

This article represents the opinion of its author, not that of Bristow Beat or its affiliates.