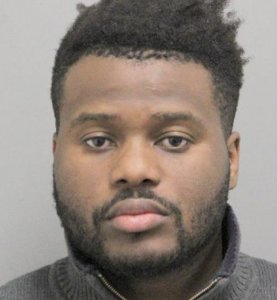 Prince William County Police Officers responded to the 3700 block of Greentree Lane in Dumfries (22026) after a woman was found inside the trunk of a vehicle.

The victim, a 21-year-old woman, reported to police that she and an acquaintance, Abubakar Sidikie Bundu, were at a residence in the 12300 block of Antietam Road when a verbal altercation ensued.

"During the encounter, the accused struck and kicked the victim, who was holding their 1-year-old son at the time, causing her and the baby to fall to the ground," said police spokeswoman Officer Renee Carr.

Eventually the parties left the residence and traveled to the area of Greentree Lane where the accused parked the vehicle.

After parking, the accused forced the victim into the trunk of the vehicle before leaving on foot with the baby.

The victim was located a short time later and the police were contacted. The accused was located nearby by officers and taken into custody without incident. The victim reported minor injuries.

Following the investigation, police arrested Abubakar Sidikie Bundu, 27, of Antietam Road in Woodbridge, and charged with abduction, domestic assault & battery and contributing to the delinquency of a minor.