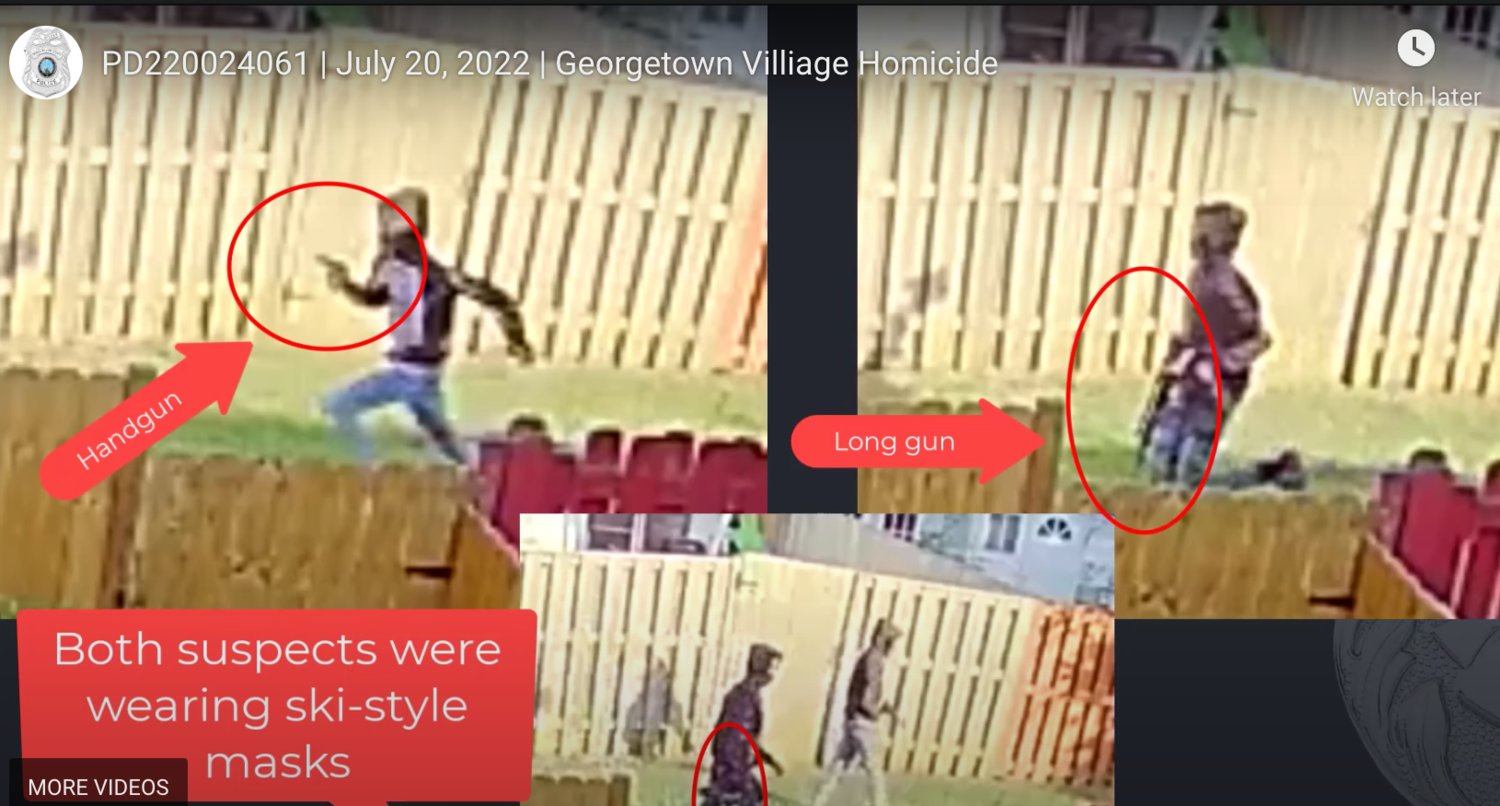 Homicide Investigation  REWARD OFFERED, VIDEO RELEASED – Detectives with the Violent Crimes Bureau are continuing their efforts to identify and locate two suspects in connection to the fatal shooting of a 21-year-old man that occurred in the 16600 block of Georgetown Road in Woodbridge (22191) on July 20, around 6:30 p.m.

Detectives have released video from a neighboring residence that captures the suspects as they approached the victim, and two additional men, between two rows of townhomes. The victim and the two other men were standing on the sidewalk nearby.

"Multiple gunshots can be heard before the suspects initially flee on foot," said Sgt. Jonathan Perok. Witnesses then see them getting into a gold-colored SUV, possibly a Mercedes.

The victim died from his injuries while a second man sustained a gunshot wound to his hand. Multiple vehicles were also struck during the encounter. Screen captures from the video are attached below.

The Police Department is offering a reward of up to $5,000 for information that leads to the arrest and conviction of those involved in this death. The investigation continues.

The deceased was identified as Brian Darnell Marshall II, 21, of Woodbridge

Video of the incident is attached below, courtesy of the Prince William Police Department, for the purpose of identifying the suspects. Gunshots are heard in this video but no violence is shown.

Homicide Investigation – On July 20 at 6:42 p.m., officers responded to the 16600 block of Georgetown Road in Woodbridge to investigate a shooting. When officers arrived on the scene, they located a 21-year-old man on the sidewalk who was suffering from gunshot wounds.

Officers provided immediate first aid to the man until rescue personnel arrived at the location. The man was then transported to an area hospital where he later died as a result of his injuries.

A 26-year-old man was also located at the scene with a gunshot wound to his hand. The man was also transported to an area hospital where the injury was determined to be non-life threatening.

The preliminary investigation revealed that two victims and a third man were standing on the sidewalk when two unknown men appeared from a nearby alley.

The unknown men immediately began shooting toward the three men before fleeing on foot. Multiple vehicles were also struck during the encounter. No other injuries were reported.

Helicopter assistance from Fairfax County police checked the area for the shooters who were not located. The men were only described as black males, wearing all dark-colored clothing.

At this time, detectives from the Homicide Unit are actively investigating the incident to determine what led up to the shooting and are seeking to speak with anyone who has information as to what occurred. More information will be released when available. The investigation continues.

Bristow Beat made slight syntactic changes to the police report.