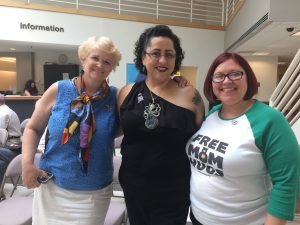 Lisa Polgar, Evelyn BruMar and Kristina Nohe advocates for LGBTQM rights at the Prince William Board of County Supervisors meeting on June 18, 2019.

The Prince William Board of County Supervisors passed a proclamation, Tuesday, June 18, to declare June LGBTQM Pride Month for the second year in a row.

The acronym stands for Lesbian, Gay, Bisexual, Transgender, Questioning (of gender identity or sexuality) and More (to include others, such as people who identify as non-binary.)

Many jurisdictions around the country celebrate LGBTQ+ or Gay Pride during the month of June.

While proclamations such as these typically pass the consent agenda without issue, LGBTQM residents and allies expected a fight. To advocate for the proclamation, a dozen or more people took to the podium during Citizens Time, sharing the reason declaring Pride Month matter to them.

Their reasons were numerous: equality under the law; a sense of respect and belonging; making Prince William County more attractive to businesses; recognizing the historic violence aimed at LGBTQ folks, even to the point of being targeted by Nazis during the Holocaust; the impact a community has on the mental health of individuals; current violence via “hate crimes” against transgender people (which are not recognized as such in the Commonwealth,) especially recent attacks against transgender victims in D.C. and Texas; the inclusion of LGBTQ rights as an extension of civil rights; and the belief that Jesus would embrace all of his children. 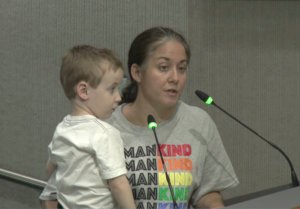 Advocate for Pride month speaks before the Prince William Board of County Supervisors.

In 2018, allies faced vocal opposition, mainly from residents who are both strongly conservative and religious. This year, the proclamation was slightly less controversial as only advocates for Pride Month spoke during Citizens Time.

Republican Kristina Nohe, an advocate on a variety of issues across the political spectrum, and wife to Coles Supervisor Marty Nohe, spoke in favor of the proclamation. Referring to scripture, she argued that Jesus would have wanted all people to be welcomed and accepted, not judged.

I know that you are afraid of the consequences of this vote. You look at how some voters took vengeance on Supervisor Nohe and challenged Supervisor Candland for their votes last year. But the real fear should be when you stand before Jesus and he reminds you that whatsoever you did to the least of his people you did unto him.

Vote yes on the proclamation not in spite of your religious beliefs, but because of them.

Evelyn and Heidi BruMar explained that the decisions here affect her family.

"I'm upset that I have to be here again to debate the worth of my life, my wife’s life and my adopted child’s life," said Evelyn.

She said that recognizing LGBTQM people should be no different than recognizing civil rights issue, adopted kids, and vets, noting her wife is a vet.

She said all anyone wants is to be treated “equally, not more. Definitely not less.”

Supervisors did not discuss the motion before the vote. 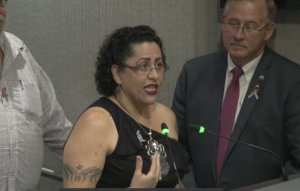 After winning, Principi took to the podium. He asked Jim O’Connor, President of Equality Prince William, and Evelyn BruMar, an organizer and advocate for the LGBTQ community in Prince William to join him as he delivered a statement on the reason he believes the proclamation is one of importance.

We are a nation founded upon and guided by the principals of equality, justice and freedom for all.

LGBTQ+ residents are, in fact, a vital part of our community and contribute greatly to the economic and social well being of Prince William, which is strengthened by, and thrives upon, the rich diversity of racial, cultural, and sexual identity of its residents.

In fact, our very own strategic plan, approved by this board, states, "in all actions of the board, strong consideration should be given to make certain the community supports vulnerable individuals and families to ensure the wellbeing of the entire community."

It is imperative the resident especially the youth feel valued feel safe, feel empowered and feel supported by their community and its elected leadership.”

With this proclamation, Prince William County recognizes the importance of equality and freedom from discrimination.

BruMar thanked the board and said the proclamation is especially important to racial minority communities.

“We are the ones who are the brunt - most of the hate - for being a double minority in Prince William County.”

*Correction made, Boddye was previously misidentified as the candidate from the Coles District.