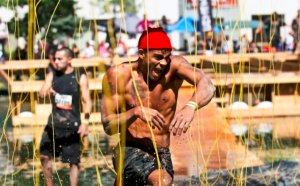 Prince William County plans to pay Tough Mudder an estimated $35,000 or all of the additional Tourism Occupancy Tax money generated by participants as part of the agreement to host Virginia 2019 Tough Mudder at Silver Lake Park in Haymarket on June 1, 2.

According to Ann Marie Maher, Director of the Office of Tourism for Prince William County, her department already paid the Tough Mudder $15,000. On top of that, the extreme racing company could receive another $20,000, or so, depending upon how many participants stay in Prince William hotels.

The county will need to match what it takes in in TOT tax and sales tax. If the Tough Mudder decides to stay in Prince William County another year, and the county agrees, that is another cost, half the TOT.

All in all, the Office of Tourism is expecting any TOT it earns to break even at best.

Office of Tourism will pull the “grant” money from its 2019 budget. Its budget has been funded by TOT of previous years.

Essentially, planning the Tough Mudder was not about bringing in tax revenue, it was about a boost for the service industry and promoting Prince William County as a tourist destination.

“It advances our Sports Tourism initiative developed upon the strategic consolidation of tourism and parks and recreation It is expected to significantly bolster Prince William County’s economy over a single weekend. It provides regional and national visibility for the County and our park and tourism assets. Lastly, it provides a unique recreational opportunity for local residents,” said Maher.

Local businesses, especially hotels, restaurants, shops and gas stations around the Gainesville area are expected to make an additional $1.6 million this weekend in revenue. This is based upon money brought in by the Tough Mudder previous years in comparable locations.

The income could exceed that, and in one jurisdiction businesses brought in an additional $6 million that weekend.

Providing tens of thousands of dollars to Tough Mudder is not unusual. Other jurisdictions have paid between $40,000 in Wistler Canada in 2018 to 250,000 in Glenwood, New York, to host the races. Jurisdictions consider it an investment.

The county charged Tough Mudder only $2 to use the land because they were the one bidding to attract Tough Mudder.

Maher said that most hotels around I-66 are sold out this weekend. And hotels and Prince William restaurants have “Show Your Band” deals in which Tough Mudder race finishers can receive special deals.

The county is also incurring other costs associated with the race, these include improving trails in Silver Lake Park and possibly other services as well.

There has been pushback from some members of the community about the cost to host the event and the toll it may take on the park. More information about the Tough Mudder and its effects on Silver Lake Park can be found here.