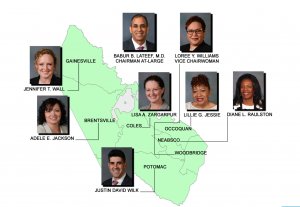 The Prince William County School Board voted to approve the Superintendent’s return-to-learning in-school plan for the second and third quarter with the flexibility to make changes in response to pandemic needs. The voted occurred two minutes to 1 a.m. on Thursday.

The new calendar information will have students in grades 5-12 return in the third marking period.

The dates of return are as follows:

Before voting, school board members spent hours interrogating Superintendent Dr. Steven Walts as to whether it was necessary to have such a slow phased-in return. Most hoped that students could return via the hybrid 2-day a week in-school model quicker. While 60% of parents chose virtual for their children, some who wanted to return in the fall advocated strongly for the return.

They stated that in-person learning was more beneficial to many students, in-person allows for peer interaction, it would be extremely helpful to working parents, and most importantly be beneficial to children’s emotional well-being.

Chairman Babur Lateef said that the “moderate-high” rate of transmission of COVID-19 in the county should not preclude opening. The division could open now for grades PreK-third according to guidance provided by the Virginia Department of Education. Additionally, the CDC only recommends that schools that open under high risk conditions offer mitigations such as a hybrid model. And with more parents choosing virtual for their children, PWCS would be able to have students six feet apart in many cases.

However, Dr. Walts said it is not only the health risks but also logistics. PWCS still does not have enough computer device to give every student. Bandwidth is not ready to serve students K-12. Busing is still an issue. Together there are 1,200 Tier 1 and Tier 2 health-compromised teachers. Schedules will have to be changed to accommodate them.

Teachers will also need to be trained on teaching virtual and in-class students at the same time. Walts said even teachers are working harder and learning more in a short period of time than they ever had before. They are working to improve the Canvass virtual learning experience. Changing that too quickly could upend all the progress they have made this year.

Things are for the most part going smoothly, he explained, rushing a return to school could jeopardize that and demoralize teachers. And Walts said it would be “pandemonium” to rush a return for high school students at the end of a semester.

Woodbridge School Board member Loree Williams proposed the motion to support Walts’s plan. She and Lillie Jessie (Occoquan) were its strongest supporter. Both said they needed to heed the advice of the superintendent who was consulting with upper level administrators, principals and looking out for teachers.

Williams said she has been on the board for seven years now and “matured” into the role. She is now slower to criticize and more willing to trust the people who are doing their jobs.

Jessie said she doesn’t know if they are making the right decision, but one has to make the decision she thinks is right.

“Parents will forgive you for maybe your kid was not getting the Canvass information, but they will not forgive us if harm comes to their kids because we became cavalier with this virus. This virus is no laughing matter.”

She said she supports Dr. Walts, who, in her opinion understands better than anyone what a safe return would look like, not that she agrees with everything he does.

Lisa Zagarpur (Coles) and Adele Jackson (Brentsville) supported the motion with reservations. They both said they would have preferred the plan was somewhat accelerated but understand the reasons behind the new calendar. Diane Raulston (Neabasco) voted in approval without comment.

Chairman Babur Lateef opposed the motion, saying he had faith the school division could have students return to school faster while still being safe.

He said the pandemic could go on for years and everyone will have to adjust to living with it. He said the data shows that schools around the country are having success in reopening and cautions people from trusting antidotes over data. He said the mental health risks are greater for students than the risk of COVID-19. COVID-19 spread in school to teachers is also rare, he said.

However, he asks parents not blame teachers for the situation since everyone is in an awful situation with the virus. “We cannot pit teacher verses family, teacher verses students. I continue to ask that we don’t do that.”

Jennifer Wall (Gainesville) said she wants to be responsive to the community and give every family a choice. She also said the pandemic may last for a long time. She told older students she feels for them and knows they very much want to be back in school.

Justin Wilks (Potomac) said he always wanted an accelerated plan, and felt the board was at odds with another.

But he also made an impassioned speech about how parents cannot vilify teachers, saying they are working “tirelessly for virtual learning,” but of late have been called, “cowards, lazy or ‘failing our children.’”

“The current situation is NOT the teachers’ fault,” he said.