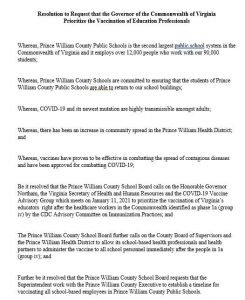 Prince William County School Board passed a resolution asking Governor Ralph Northam to prioritize school personnel for vaccinations after health care providers in order to allow students, families and teachers to return to school safely sooner rather than later.

The resolution, proposed by Chairman Dr. Babur Lateef, asks that school personnel be placed in Phase 1a (group iv) after healthcare workers and first responders. The resolution passed unanimously.

Be it resolved that the Prince William County School Board call on the Honorable Governor Northam, the Virginia Secretary of Health and Human Resources and COVID-19 Vaccine Advisory Group which meets on January 11, 2021 to prioritize the vaccination of Virginia’s educators right after the healthcare workers in the Commonwealth identified as phase 1a (group iv) by the CDC Advisory Committee on Immunization Practices and…

Lateef said Fairfax and Loudoun County put forth similar resolutions and he thought it important that they present a united front, thinking the largest school districts in the Commonwealth would hold some sway.

Lateef said they also wanted to involve the Board of County Supervisors to coordinate efforts.

The Prince William County School further calls on the County Board of Supervisors and the Prince William Health District to allow its school-based health professionals and health partners to administer the vaccine to all school personnel immediately after the people in 1a (group iv); and..

Superintendent Dr. Steven Walts said it would make a difference in getting back to in-person learning. "I want to thank you and the board for bringing this forward. It is a great idea. It will help bring kids back.”

Dr. Walts said they they will work collaborative with the Board of Supervisors and county staff. He said the schools can provide space for vaccinations, especially in the Kelly Leadership Center where there is open space and no students.

“I know once it gets to us, we’ll do a great job,” said Occoquan representative Lillie Jessie. “Listening to all these people tonight (speaking at Citizen’s Time), we need to help them feel that they are safer.”

Jessie said she called the Virginia Secretary of Education and discussed this proposal with him. She would appreciate moving teachers into the 1B category.

There was no discussion as to whether Tier 1 teachers would be prioritized.