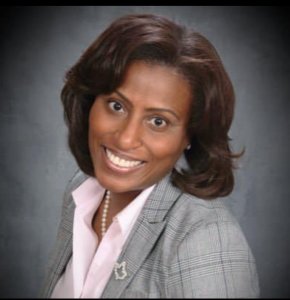 She will be the first woman and first African American ever to serve in the role since Prince William County began offering public education approximately 150 years ago.

She will take over for Dr. Steven Walts who has served as Superintendent for the last 16 years, and will be retiring this year.

Prince William School Board Chairman At-large Babur Lateef said the school board had worked with the search firm BWP & Associates this past year. After surveying the community, they created an ideal candidate profile that produced 45 applicants from the highest levels of educational leadership across 16 states.

“One candidate, LaTanya McDade emerged from this terrific pool as possession the qualities, skills and expertise which matched the superintendent profile that YOU ALL helped create,” Lateef said.

“We believe LaTanya McDade will be a strong leader dedicated to our academic and extracurricular mission. The board was impressed by her record of collaboration, transparent communication and senses of accountability.”

“LaTanya McDade will be the first African-American and woman to assume the role of superintendent in the School Division’s history. She is also the daughter of immigrants and understands our community well”

“While no one should miss the historic nature of this appointment,” Lateef said. “it is absolutely critical to realize that it is the content of Ms. McDade’s character that has driven her success, and our decision through this process.”

“It is my final point to tell you about a request Ms. McDade made…The superintendent is usually known as Chief Executive Officer of the school division. She asked that we refer to her as CEO and Chief Educational Officer. That, folks, left the board reassured that there is no doubt about Ms. McDade’s priorities.”

“I am overjoyed to be appointed as the new superintendent of the Prince William County Schools district,” LaTanya McDade said, addressing the board, “It is truly an exemplary school division.”

She said the welcome she received was “heartwarming,” and she has nothing but “gratitude” to the board members for their professionalism and integrity. She said to Dr. Walts that it is evidence that his service has been “a labor of love.”

McDade has served as a teacher, a principal and an administrator, but she said that as a mother, she wants for all Prince William County School students that which she desires for her two sons in their educational careers, “and I will never settle for anything else.”

To her staff she said “I want you to know that I will value and respect you each as professionals and experts in your craft… [We are] one team with one north star.”

The School Board approved McDade in an unanimous vote. School board members praised McDade and said they were absolutely confident in their selection.

“This is a community who loves their schools and asked for another leader who is passionate about Prince William County Schools,” said Adele Jackson of the Brentsville District.

She said she chose McDade to serve her former students, her own children who attend Prince William County Schools, and lead the entire staff of the school division.

“You spoke to our hearts, our educational heart,” Lisa Zargurpur, representative of the Coles District, and Vice Chair. “I know our students are safe in your hands.”

Loree Williams of the Woodbridge District said it was a great privilege and honor to help select the next superintendent of the 35th largest school district in the nation.

Lillie Jessie of the Occoquan District asked to speak last. Not only is she the longest serving member of the has served under six superintendents as a teacher, principal, and board member, including Herbert Saunders and Stewart Beville for whom schools have been named, and Edward Kelly, Dr. Walts’ predecessor.

Jessie said she attended college in Northwestern University in Illinois so she knows Chicago well; however, McDade put everyone at ease by using “y’all” correctly.

She said that McDade believes, as she does, that “all children should learn, and not some,” and all student at the highest level.

She said that Chicago, like Prince William County, is very diverse, including economically. She said Chicago has some struggling and some better than well-to-do neighborhoods, which leads her to believe that McDade is prepared to serve students from every demographic in the western and eastern sides of the county.

She also said that McDade express her desire to lead with the board as a unified nine.

“I feel nothing but pride and excitement," Jessie said. "Welcome to Prince William Public Schools.”

Walts praised the entire staff of Prince William County Schools from teachers to custodians to school nutrition workers and administrators. He said McDade will be happy to find that his leadership team is among the best in the nation, and she will be able to make her own appointments as well.