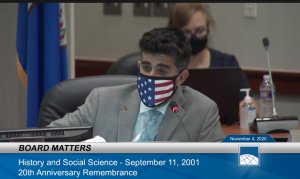 Potomac School Board member Justin Wilk at the Nov. 4 meeting of the Prince William County School Board.

Most of us can vividly remember where we were on Sept. 11, 2001, but for today's school children, it is something they will likely learn about in a history classroom. It will be up to their teachers and parents to help them to understand the gravity of the day and the way that it transformed a nation.

That is why, with the 20th anniversary of 9/11 next year, Prince William County Schools plans to adopt  curriculum for the week leading up to September 11th. It is a way the division can make sure that every child learns about 9/11 in a meaningful and age-appropriate way.

At the Nov. 4 Prince William School Board meeting, board members listened to a presentation on creating a “9/11 Taskforce” and ideas on what that curriculum would look like.

Commemorating 9/11 was the idea of Potomac school board member Justin Wilk. The former middle school civics teacher wanted to make certain the events and aftermath of 9/11 would be taught to the next generation.

Wilk was senior in high school when the World Trade Center Towers in New York City and the Pentagon in Arlington were attacked. It was a seminal event in his lifetime and he knows it is important to the Prince William County residents due its proximity to the Pentagon and its large military population.

“I represent Quantico and a large military community,” Wilk said. As such he said he wants to teach 9/11 in a way that expresses gratitude to service members, police, fire fighters and first responders, but also commemorates those who died, especially those from the Prince William community.

To make sure everyone has a stake in it, Wilk asked that the curriculum to be developed by a 9/11 Taskforce comprised of PWCS educators and community members. Every member of the board would be able to nominate a community member from their district to participate. The Taskforce would put forth a recommendation on how to teach 9/11 for different grade levels.

Jeff Girvan. Supervisors of History and Social Sciences for PWCS, gave examples of what curriculum might look like. Students in grades K-2 could learn about “Everyday Heroes" such as firefighters and police officers; grades 3-5 could learn the history behind what they know as Patriot Day; and 6-8 may learn about how tragic events can bring a nation together. High school could explore what it means to be the “Post 9/11 Generation,” and how 9/11 has shaped the last 20 years, which in turn affected their lives and culture.

Girvan suggested the 9/11 lessons and assignments be applied across disciplines. For instance, students could create auditory works, poems or make short documentaries on the subject. Students could also interact via community-based commemorative projects or community outreach. PWCS could also reach out to community partners.

Although the Taskforce would ensure that the curriculum be somewhat standardized across the division, Girvan's recommendations demonstrated that it would not be a rigid curriculum, but one that would foster creativity on the part of the teachers and students.

Wilk expressed that he was very happy with the presentation.

Gainesville school board representative Jennifer Wall said it was a great idea and she liked how it incorporated cross-curricular activities and connected learning to real world events.