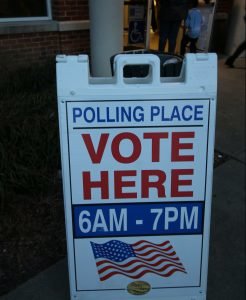 RICHMOND, Va. -- Virginia lawmakers have advanced Senate bills that make voting easier, including not requiring an excuse to vote absentee and recognizing Election Day as a state holiday. Other legislation that would extend citizen access to voting -- part of the 11-point “Virginia 2020 plan” put forward by Gov. Northam -- has yet to clear committees.

Senate Bill 601 designates Election Day as a state holiday to give more citizens the chance to cast their ballot. The bill also would strike from current law Lee-Jackson Day, which celebrates the birthdays of Confederate generals. The legislation, introduced by Sen. L. Louise Lucas, D-Portsmouth, passed the Senate Tuesday.

A bill that removes the need for an excuse to cast an absentee ballot passed the Senate Monday. SB 111, introduced by Sen. Janet Howell, D-Reston, permits any registered voter to vote by absentee ballot in any election in which he is qualified to vote.

Several other bills that facilitate ease of absentee voting are SB 46, removing the requirement that a person applying for an absentee ballot provide a reason to receive the ballot; SB 455, extending the deadline when military and overseas absentee ballots can be received; SB 617, authorizing localities to create voter satellite offices to support absentee voting; and SB 859, making absentee voting easier for people who have been hospitalized.

Legislation in the House includes a bill that would also allow for no excuse absentee voting, automatic voter registration and same-day voter registration. In the Senate, a bill would pre-register teens 16 years old and older to vote and one bill in the House would reduce the period of time registration records must be closed before an election. All House bills are in an Elections subcommittee.

TheHouseand Senatealso introduced bills that would remove requirements that voters present a photo ID when voting. Under the legislation, voters can show voter registration documents, bank statements, paychecks or any government document that shows the name and address of the voter. Neither bill has made it past committee.

Virginians currently must present a photo ID, such as a driver’s license or a U.S. passport, to vote in person. According to a 2012 studyby Project Vote, an organization that works to ensure all Americans can vote, approximately 7% of the U.S. population lacks photo ID. This is especially true of  lower-income individuals, those under the age of 20 and ethnic minorities.

Voters can provide their social security number and other information to get a free Virginia Voter Photo Identification Card, but some legislators said that service is unknown to many.

“Before the photo ID requirement voters had to sign the affidavit to say they are who they say they are, and I think that was enough,” said House Majority Leader Del. Charniele Herring, D-Alexandria. “I feel the photo ID was a way to suppress the vote because not everyone has one.”

Former Republican Gov. Bob McDonnell signed SB 1256 into law mandating voters have a form of ID with a photograph. Virginia is one of the 18 states with such voting requirements, according to the National Conference of Legislature.

In 2016, the U.S. 4th Circuit Court of Appeals upheld the ID requirement after attorneys for the state Democratic Party challenged the law, arguing it had a disproportionate impact on low income and minority voters.

“People are fed up with our overly restrictive and racist voting policies, and the legislature is finally getting rid of some of the biggest roadblocks to progressive reform,” said Glass. “This has been a long time coming.”