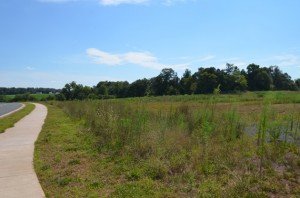 The Prince William County School Board and Board of County Supervisors may consider Rollins Ford Park, located on the Vint Hill side of Broad Run Creek on Rollins Ford Road, as a possible location for the 13th high school as it has been proposed by the developer Brookfield Homes.

Although a staff member at Brentsville Supervisor Jeanine Lawson’s office did not agree with the slant of the post, she did confirm that Brookfield Homes proposed the Rollins Ford site. An announcement will be made at a press conference before Tuesday's Board of County Supervisors meeting at the McCoart Building.

According to Cleland's blog, the high school site is dependent upon the approval of a new housing development called “Strathmore” that Brookfield homes is proposing to be built along Vint Hill Road. According to the post, it would include just over 400 homes, mostly single-family units.

The post also notes that a county land swap would be involved with the deal to get the new high school. Rollins Ford Park was originally intended to be soccer or multi-use fields. The fate of the park has not yet been confirmed, but more should be revealed Tuesday.

The proposed opening of the 13th Prince William high school was already pushed back one year to 2020 when the Stone Haven community proposal was withdrawn by the developer from the Board in January.

*Bristow Beat added "may be considered" as we have been informed that it is officially being considered by the Board of County Supervisors at this time.