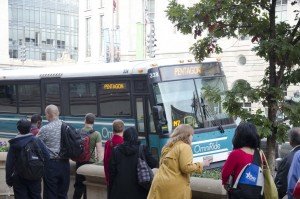 WOODBRIDGE, VA – OmniRide Ridesharing services are the best-known and most-utilized local commuter assistance programs in the region, according to Commuter Connections’ 2019 State of the Commute Survey Report.

The report, which was released in September, showed:

For the general public, that means more residents are aware they have commuting options and an increasing number of people are choosing to share their commute rather than drive alone. This is the third consecutive time the survey has ranked OmniRide Ridesharing, which was previously known as OmniMatch, first in awareness and usage.

OmniRide Ridesharing provides free assistance to commuters searching for a carpool or vanpool. Interested commuters simply fill out a form online and are matched through the regional Commuter Connections database with other commuters who live and work nearby and who have similar work schedules. OmniRide even works with Prince William-area employers to create and expand commuter benefit programs that can be an effective tool in recruiting and retaining a quality workforce.

“The Prince William area has many talented workers who are employed outside the county and as a result, our roads have plenty of traffic congestion. Ridesharing is a wonderful alternative, especially for people whose homes and workplaces aren’t necessarily near traditional transit,” said Prince William County Supervisor Ruth Anderson, who also serves as chair of the Potomac and Rappahannock Transportation Commission (PRTC), which oversees OmniRide. “The PRTC Board is pleased that OmniRide’s Ridesharing team has had such success in spreading the message about alternatives to driving alone.”

See the full 2019 State of the Commute Survey Report. Learn more about OmniRide Ridesharing or speak with an OmniRide Customer Service Agent about alternatives to driving alone at 703-730-6664.

The Potomac and Rappahannock Transportation Commission (PRTC), operating as OmniRide, provides a variety of services in Prince William County, the City of Manassas and the City of Manassas Park including: OmniRide Express and OmniRide Local bus routes; OmniRide Ridesharing for the promotion of carpools and vanpools; and OmniRide Employer Services which helps businesses to implement and expand commuter benefit programs. PRTC also co-sponsors the Virginia Railway Express in partnership with the Northern Virginia Transportation Commission.