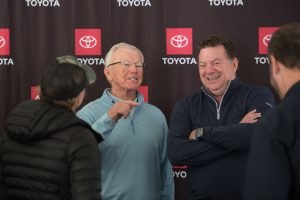 Joe Gibbs and Ed Laukes talk with other stakeholders at the Youth For Tomorrow Country Fair & Auction. (Photo by Dawn Gardner)[/caption] Toyota was the premier sponsor of the 34th Annual Youth for Tomorrow Country Fair & Auction, Sunday, in Bristow. Ed Laukes, Vice President of Marketing for Toyota North America, attended the fair, praising the work Joe Gibbs has done with the Youth for Tomorrow organization. Youth for Tomorrow is a faith-based group home, school and counseling center on a beautiful campus in Bristow. The nonprofit organization serves children and teens who are the most at risk: teen moms and their children, young people who have been trafficked, and unaccompanied Hispanic minors and other young people who have fallen behind on their education due to tragic circumstances. Joe Gibbs, former coach of the Washington Redskins, founded the youth home and nonprofit in 1985. It grew slowly, but is now thriving thanks to so many generous corporate and individual sponsors, and also the success demonstrated through its graduates. It is now growing and evolving in response to societal challenges today’s young people face.

“This community and what they have done here at Youth for Tomorrow - I think it has changed so many young people’s lives. We have 160 kids on campus, and also have roughly 1500 in counseling,” Gibbs said. “With some of the horrific things that are taking place in America and the world today, I think this youth home has helped so many young people who have really fallen through the cracks in so many ways, including falling behind in education. The youth home has stepped in and helped them reestablish their lives.” 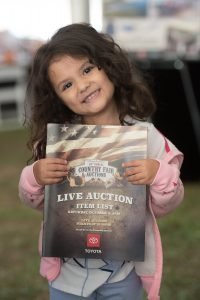 Girl attends the 34th Annual Youth For Tomorrow Country Fair. (Photo by Dawn Gardner)
Gibbs said the school is built on Godly principles that there is a right and a wrong. He believes the best solution to societal problems, even more than passing laws, is by taking concrete steps to make a personal difference in people’s lives, so that is exactly what they are doing. “It takes a serious problem with people who really care, and I believe in teaching Godly principals. That’s what the youth home does.” Toyota served as the biggest sponsor this year, creating its “Toyota Activity Center” with activities for families, including games, vehicles and a monster truck. They also involved local dealerships Miller Toyota of Manassas and Warrenton Toyota. Toyota’s decision to sponsor Youth for Tomorrow’s Country Fair and Auction stems from a decade-long relationship between Coach Gibbs and the Toyota leadership team. “It started off small as a type of philanthropic venture to help Joe, and to help Youth for Tomorrow, and it continued to grow,” Laukes said. “Now, we are the major sponsor, and we have a pretty big presence here.” “Edward,” as only Coach Gibbs calls him, sees Gibbs as still very much a coach, inspiring prominent people to support his mission of helping young people. 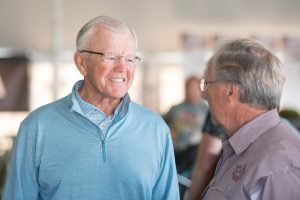 Joe Gibbs talks with a Country Fair attendee under the auction tent. (Photo by Dawn Gardner)
“Joe has such a strong reputation in this area, and it served well beyond his Super Bowl-winning tenure with the Redskins. He is just one of those guys people just want to be around. He is the ultimate coach because he gives everyone - whether it be his race team, his football team or any of the organizations he’s associated with- a  very, very clear direction of what his vision and expectation are, and then from that point forward, he lets you actually do it.  He gives you the responsibility in order to do that and that is the reason I think, he is so successful. He doesn’t get too into the weeds.” Being on the board of Youth for Tomorrow aligns with Toyota’s approach to philanthropy. The company does not like to be a passive supporter and is choosy about where it spends its money. “We don’t just give money, we activate,” Laukes said, and they like to invest in causes their customers care about. “It’s just one small piece of what we do from a philanthropic standpoint. It’s what we’re all about. We’re not just all about cars and trucks,” he said.

Toyota Motor North America, Inc. traces its roots to a young man who wanted to “make something that would benefit society.”  Watching how difficult it was for his mother to weave cloth on a manual loom, Sakichi Toyoda began making simple improvements in the device. This led to many patents and the establishment of the Toyoda Automatic Loom Works in Japan in 1926. But it was Sakichi’s son, Kiichiro Toyoda, who founded the automobile side of the business. In 1933, he started a small automotive division within the loom business that became Toyota Motor Company, changing the spelling of the name to clearly distinguish it from the loom works. Today, Toyota is a global leader in all kinds of mobility solutions, from vehicles that run on everything from gas to hydrogen to electricity and to robotics and artificial intelligence. Today it has 10 plants all over the U.S., and directly employs more than 36,000 people. Its nearly 1500 dealerships in the U.S. sold 2.4 million cars and trucks in 2018. Currently, Toyota is transitioning to become a mobility company, seeking to improve the lives of individuals just as Mr. Toyoda envisioned. Through Toyota’s "mobility for all" vision, they’re creating better ways to move, whether across town or across the room.  They’re also about “being of service” with universal, inclusive, and accessible mobility solutions providing the greatest number of options to the greatest number of people. 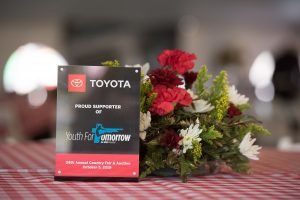 Place settings for auction VIPs at the 34th Annual Youth For Tomorrow Country Fair & Auction. (Dawn Gardner)[/caption] Toyota is interested in helping those with disabilities become more mobile and independent through technology like human support robots or self-driving cars. Toyota expects transportation will evolve and is making big investments in global R&D, including at the Toyota Research Institute and other facilities to become a leader in emerging mobility and robotics technologies. Toyota currently offers an advanced zero-emissions vehicle called “Mirai” (pronounced Mer-eye and available in California), which drives on hydrogen of which the only byproduct is water. They also working on hydrogen fuel cell electric Class 8 Semi-Trucks. “It goes well beyond cars.” Toyota is also looking at current trends in the market, such as how today’s trucks and SUVs make up 70 percent of the personal automobile market. It was Toyota who introduced the car-based SUV (Highlander) that offers the same amenities and as smooth a ride as a sedan, and it has come to replace the family vehicle. But, unlike some other automakers, Toyota is not closing their car factories in the U.S. Instead they are continually investing in production and the improvement of their vehicle lineup, including the recent addition of All-Wheel Drive to its Camry and Avalon sedans. Games at the Toyota Activities Center by Dawn Gardner Through his position on the board, Laukes has the opportunity to shape the future of Youth for Tomorrow “whether it be financial or just looking directionally at where they are taking the organization.” Toyota could have chosen to only support Youth for Tomorrow through galas and black-tie events, but Laukes felt strongly they support the family-oriented Country Fair. “We are a company that has built our brand around families.” Gibbs said the Youth for Tomorrow Country Fair allows people in the community to see the young people the organization has impacted. It is their biggest fundraiser and he hopes it encourages community members to become more involved whether it be through prayer, volunteering or financial support.