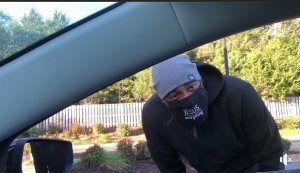 Michelle Pivonka announces to Kenneth Luckey that he won $500 of gift certificates to Virginia Gateway stores and restaurants.

“Luckey,” as everyone calls him, was one of two Everyday Heroes who received gift certificates from Virginia Gateway.

In October. Virginia Gateway asked the community to nominate those who were making a difference in the community, especially during COVID-19- people such as caretakers and service workers.

Watch the video of Pivonka informing Luckey that he had won. 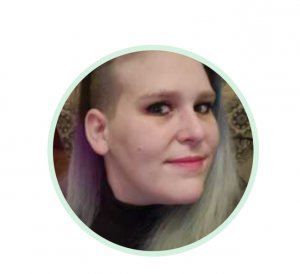 Brittany True, owner of BTrueDelivery runs her business through the Dumpling app.

Brittany True, owner and founder of BTrueDelivery received the most nominations for going above and beyond for her customers during the COVID crisis and quarantine. True founded BTrueDelivery, a grocery delivery service in March right after the COVID-19 shutdown. Her pet sitting business was suffering, and she was already working a second job for a national grocery delivery service.

True realized she could do a better delivering groceries as an independent business owner, and so she did. She quickly built a client base and gained loyal customers by delivering within hours and obtaining items often sold-out at stores. For instance, True picked up toilet paper whenever she found it, so it was always available for her customers.

“I could get people what they wanted more quickly. I have really good attention to detail. I can do multiple store shopping,” she said.

In one instance, a woman contacted her asking if she could pick up groceries for her at a food pantry as the closest one to her had closed. True solicited donations on her business page and raised $500 to help the woman. Then, True took the $500 and shopped at B.J.’s Whole Sale Club in Virginia Gateway to get the woman stocked up for a good while.

Her clients, especially the elderly who were staying inside due to COVID-19, really appreciated True, and nominated her.

“One of my clients had found first, and nominated me, and then let me know. I put it on the business page for my clients to see,” said True. She thought it would be good publicity, but was not expecting to win with 31 nominations.

“I was touched that I was nominated. I wasn’t expecting the overwhelming response that I got,” she said.

True said she really appreciates the recognition and knowing that her business has helped so many people during a very difficult time. 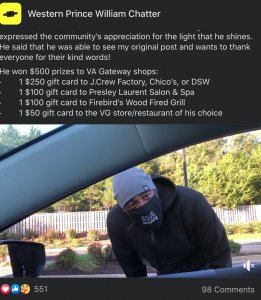 Michelle Pivonka shares the video of Luckey being informed of his prize on Western Prince William Chatter.

But True was not the only person Virginia Gateway shoppers celebrated as an “Everyday Hero.”

Impressed by all the nominations for Kenneth Luckey, Virginia Gateway received permission Crow Holdings to provide another $500 in gift certificates.

So Galik contacted Pivonka, who first nominated Luckey, to see if she would want to participate in presenting him with the reward. Pivota excitedly agreed, and then recorded the interaction.

Pivonka said she wanted to thank Luckey, who always went out of the way to make her day. For instance, she first noticed how he sanitized her credit card.

Then one time, she complemented his Oreo Cookie-themed mask and was blown away by his response. “A split second later he told me to hang tight and came back to the window with a brand new one I could give to my daughter.”

Little interactions like that, mean so much, she explained, especially when we have limited contact with others. Later, Pivonka later found out that one of Luckey’s granddaughters is in her 3rd grade class at Chris Yung Elementary School in Bristow.

Luckey, who has seven children and nine “grand-babies,” said he enjoys working at the drive thru line at Burger King because he feels good engaging with people in a positive way.

“It’s what I do. It makes me happy. You don’t know if they’ve had a bad evening, or a bad day. It’s being nice and courteous to people." said Luckey. “You never know. You may make their day.”

Luckey explained he was extremely moved to be recognized as he tends to put other people first without expecting anything in return. “It was a surprising moment. I never do things for recognition; I just do things because how I was raised.”

Galik said that Virginia Gateway enjoys giving back to the community, and hopes to have more opportunities to do so. While the shopping center is not having its usual Holiday festival she hopes that people will continue to frequent its stores and restaurants during the holiday season. Virginia Gateway stores are taking extra precautions to keep their customers safe and to make sure everyone feels welcome.

Virginia Gateway is a sponsor of Bristow Beat.