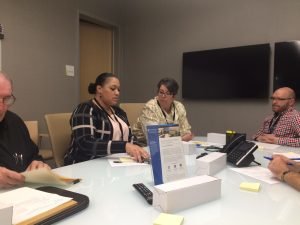 A breakout group discusses the challenges that service organizations face in the county.

Western Prince William County's prominent nonprofit organization with a mission of providing services to those in need within the community will soon be coordinating their efforts in a more concerted way.

"As part of the Strategic Plan Health and Wellness chapter, the county is looking to coordinate the various groups that provide aid to the needy in our community," said Mary Beth Schaal, an aide to Supervisor Lawson.

Lawson said she felt a collaborate like this was important as the western side of the county is growing and requiring more services.

The organizations share a similar purpose, and representatives believed it was time they collaborate more officially and efficiently. The Nov. 30 meeting was the first of several meetings meetings aimed at synchronizing their efforts.

Attendees said they were often working with the same people, and they would to find a way to work more effectively together. The idea is to serve more people in need, to reduce overlapping services and outreach, and to improve coordinate between their agencies own agencies to better serve those in need.

After brief introductions, the attendees divided into a breakout session in which they brainstormed what the issues were their organizations are facing and ideas for what a successful collaboration would look like. 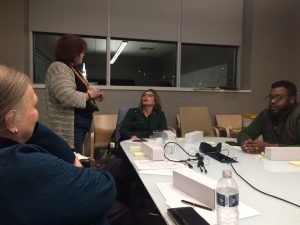 Betty Dean of the Coalition of Human Services confers with Supervisor Jeanine Lawson.

Common issues in the community that the nonprofits addressed included the need for more affordable housing; means to address homelessness; educational opportunities, job training and mentoring; affordable transportation; living wages; affordable and accessible medical treatment including mental health treatment and drug abuse treatment; assistance for young adults aging out of foster care; and help for those who have been sexually abused, including children.

Looking closer at what effective communication would look like, they said they wanted to be inclusive and diverse; to assess how things are working and to work towards solutions; to foster connections; to be data driven; and to be vocal advocates for those in need.

Attendees agreed that once people thought “outside the box” of their own organizations, they could better serve the community. They would have to embrace collaboration rather than exclusion and foster inclusiveness rather than competitiveness.

The atmosphere was positive, and attendees said they were hopeful about future meetings.

"It was exciting to see folks who have never been around the same table before coming together to share idea and finding out that by working together we actually identify some things that we're all struggling with," said Steven Liga of ACT. "And I'm hopeful that by having meetings like this we'll find ways that we can find solutions to these same things that we're working on together." 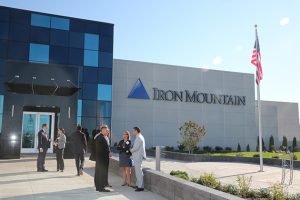 Lawson said that organizations are welcome to call her office for help in further coordinating between each other or referring a resident in need of services.

Lawson thanked Iron Mountain Data Center in Gainesville for allowing the organizations free use of their conference room.

Iron Mountain Incorporated is a global business dedicated to storing, protecting and managing information and assets. Sixty-five years ago in Boston, it began as a company that would shred confidential information but it now deals primarily with data management.

"This is the first splash into letting people know that we exist," said one of the representatives of Gainesville data center. He noted that while it's a very technical field they also hire many nontechnical employees to perform"regular good paying jobs."