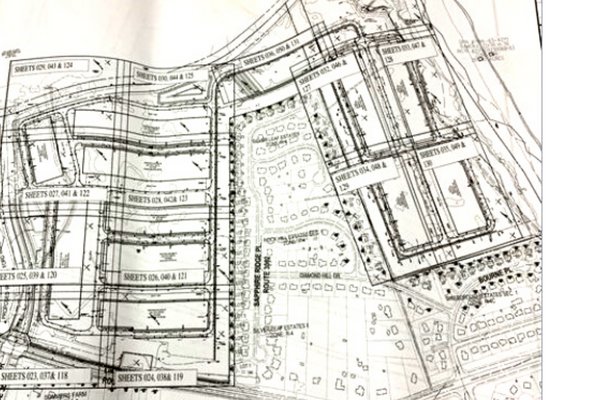 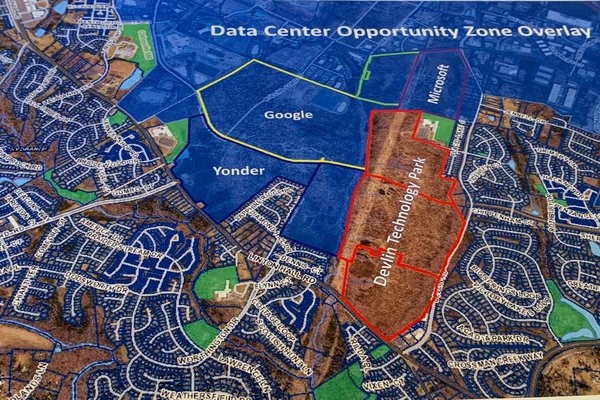 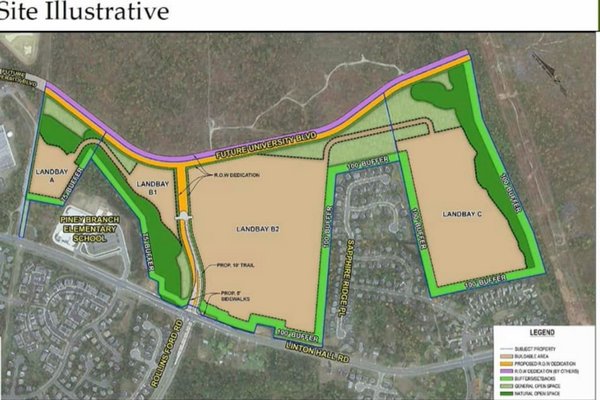 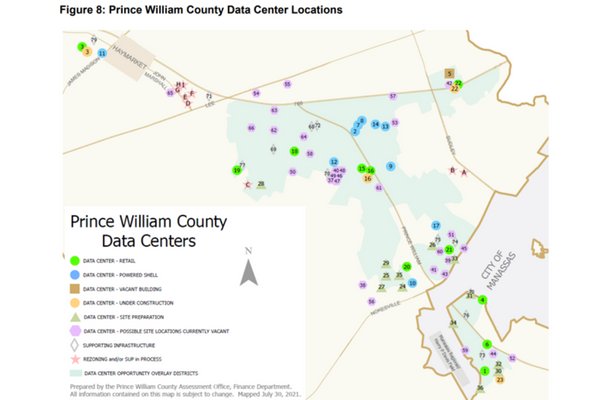 Amberleigh Station and Silver Leaf residents are becoming more vocal in opposing the planned data center park that would surround them on Linton Hall Road in Bristow.

Dr. Steve Pleickardt, President of the Amberleigh Station HOA and  Republican candidate for the Virginia House of Delegates in 2021, claims his community was misled.

When the Prince William Board of County Supervisors approved the center in September of 2021, nowhere did it say there would be 11 data center buildings on the property.

After investigating, Pleickardt learned that the Youndr site could house as many as 15 data centers. He requested the site plans via the Freedom of Information Act because he could not get them from the county otherwise.

He was stunned to find the site would house 11 data center buildings, surrounding his neighborhood on three sides. More would come around Piney Branch Elementary School.

Each building averaged 300,000 square feet and would be 80 feet tall. And more are proposed for the Devlin Tech Park, for which there will be a public hearing on Sept. 13.

Pleickardt said it’s now time for his community to “Wake Up!”

He and a group of fellow citizens are working to see if the site plans can be remanded. He cites new information coming to light such as how loud the data centers are predicted to be, and how many buildings are planned. Elspeth McCormick was one of those residents who joined the resistance from the beginning.

"I think first and foremost in everyone's mind are health and safety concerns. The effects of data center noise seem to be largely unstudied. How much noise is going to be produced by all these buildings and how will that affect us? Will there be issues for our students in schools surrounded by the monotonous hum? What are the short- and long-term effects on our kids?" McCormick asked.

Amberleigh Station is an HOA community of 113 single-family homes built in 1992.  Residents knew that the forested land would not last forever, and for a while, they thought they would get Stone Haven: a low-density community that was to include trails, open space, plus, a pool and clubhouse Amberleigh residents could share. The concern was it would bring 1,000 new homes to Bristow, so there would be a need for schools, roads, and other services.

Data centers seemed like a reasonable alternative. They require little county services. But before people realized what was happening, Prince William County was on track to become the biggest data center hub in the world.

Many say data centers are great for the county, but people who will be getting them right next door tend to disagree, especially as more research has been done.

Today, Pleickardt says they were sold out and deceived by big tech, and billionaire land developers. He also blames Prince William County Planners and supervisors. Pleickardt explained the devil is in the details, and those details were left out of plans and presentations. The applicant made their proffers seem more than sufficient, even though they were the same kinds of setbacks and buffers the county applies when neighborhoods abut office parks or retail.

"During the initial rezoning of the Hunter Property, we pushed for larger buffers but were told that 100 feet were more than generous from the land owner," McCormick said.

But she and Pleickardt agree that is insufficient to block out noise from the giant cooling systems.

"I am not sure people understand exactly how little 100 feet is. Incompatible uses like residential and industrial zones need significantly larger buffers when placed next to each other," she said. "We depend on our county supervisors to protect and advocate for our communities, not bend to the will of land developers and we feel let down."

Would neighbors hear the data centers?

The data center will not only affect Amberleigh residents claimed Pleickardt, but also homes, schools, and parks along Linton Hall and Rollins Ford roads.

NASA scientist Dr. John Lyver predicts noise will be heard for two miles, especially within a half-mile radius. With 11 buildings, the noise would be amplified, and Lyver predicted it would exceed the noise ordinance.  But HVAC systems are exempt from the county's noise ordinance, which is something the county is trying to amend.

But while Kingsbrooke is a community of 700 plus homes, their HOA has not signed on with the HOA Roundtable to oppose such data centers. Residents have just begun learning about the data center park. It had not been on their radar during the past year.  Perhaps the county did not think other neighborhoods would be affected.

The plans read: “Any use that constitutes a public or private nuisance, or that permits or generates a noxious odor, noise, sound, litter, or dust, which can be heard, or smelled on properties in the Amberleigh Station or Silver Leaf communities and Piney Branch Elementary School shall be prohibited."

Supervisor Lawson said she is working to allow the county to do more to protect residents from data center noise. She wants noise ordinances to cover data centers and make them enforceable.

McCormick said she is especially worried about how it will affect children in school during the day.

"If the plans go forward, there will be at least 15 schools less than a half mile from multiple data centers, most notably Bristow Run, Piney Branch, and Chris Yung elementary schools, and Gainesville middle and Gainesville high schools," McCormick said.

Monday, opponents of data centers near residential or rural areas of Prince William County held a rally outside the Amazon data center on Tanner Way in Manassas City. They explained how neighbors in the Great Oak community could hear data centers.

A visit to the community reveals a low hum from the backyards of certain residences. But wouldn’t the hum from 11 data buildings be louder? Pleickardt also worries about the noise of jackhammer construction that can go on for a decade.

“We’ve had to advocate for ourselves. Wake up, Amberleigh Station, wake up Bristow! See what’s coming!" he said. "It may be too little too late, but I had to sound the alarm."

"We have concerns about our property values. We are hard-working middle-class families. For most of us, our homes are the greatest investments we will make. How much value will we lose? Will we be even able to sell our homes if we need to?" she asked.

At the demonstration, Pleickardt explained that at this point, most of his residents are angry.

“Our residents are irate and worried about their property values. Five hundred men, women, and children will be affected by this (deal) made during Covid. Our supervisors are supposed to protect their community and their constituents. No one shows up until the first tree falls, but when does it end?"

Amberleigh Station is not happening in a vacuum. Those who are mobilizing believe data centers will pop up wherever there are open land and power line substations.

Peickardt continues to educate people on what a data center is. It is not just a few buildings. The Prince William Digital Gateway could get 90-95 buildings! That is why more and more residents are banding together with a shared goal.

"I am hopeful that developers will see the issues coming out of the Great Oaks community with Amazon's new buildings. and that they will provide us with larger buffers, sound studies during the site planning phase, and HVAC cooling technologies that are as quiet as possible for their upcoming projects to avoid public outcry," McCormick said.

Who saw this coming?

The data center was proposed when the world was still in the throws of Covid-19. Most residents never attended a meeting, before the project was approved by the Board of County Supervisors in September of 2021.

Many call him an alarmist, but  Pleickardt continues to advocate for his neighborhood. He describes it as a fight between David and Goliath, with the big tech and billionaire dollar land owners being Goliath.

“The people who are going to be hurt. The children going to be hurt all at the expense of the billionaire," he said. “This is a tiny little helpless community that is being suffocated by data centers.”

And yet Yondr is a Danish company, ironic because the government of Denmark recently passed a law limiting data centers in its country.

It is about money?  'When will they see that money?' Why should current Bristow homeowners sacrifice their quality of life, Pleickardt asked.  He wants people to be able to enjoy their homes, their neighborhoods, and their backyards, to come home from work to a sanctuary where they can relax.

To keep their neighborhood peaceful, Amberleigh Station residents will continue to fight the development.

"I wish all the rezoning and site plan approvals for data centers would be halted until the County has experts who are able to actually make recommendations to our board of supervisors, but they continue to rush to approve these projects," said McCormick.

There are so many unanswered questions, she said should have been answered before the projects moved forward.

"There have been little to no studies on the impact to water and other environmental concerns nor health and safety of our communities. And we aren't talking about one or two data buildings. We are talking about hundreds in western Prince William County."