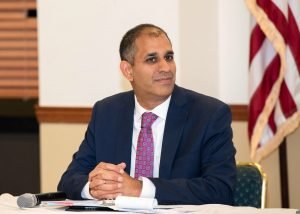 Babur Lateef is serving as interim Chairman At-large on the Prince William County School Board. Last year, he received the highest number of votes of anyone who had ever run for school board chair in the county.

This November, he is on the ballot again with a “community-minded platform” based on “promises kept.”

“The goals that I have are driven by the folks I talk to in the community,” said Lateef.

His key issues are improving safety and security, increasing space and infrastructure, promoting student success and improving employee salaries to attract and retain the best educators in order to help students achieve.

Lateef is proud of the budget his school board passed last year, especially significant raises educators. They received both steps and cost of living adjustments (COLA), a 4.8% average increase overall.

According to Lateef, not everyone on the board has prioritized employee raises as he and Justin Wilk of the Potomac District, have.

But funding needs to come from somewhere and so Lateef worked closely with Virginia’s Secretary of Education Atif Qarni.

“I called him every day. When the chairman of the second-largest school division calls, he picks up the phone.”

Lateef believes the school board has made progress but has challenges ahead as well. Prince William County Schools have the highest-class sizes in the state and teachers are the lowest paid in the Northern Virginia region on average. “It’s a lot to ask them to stay.”

The school board has no taxing authority, so school funding depends upon the supervisors and state representatives. He asks Prince William residents to vote for leaders who will support the schools.

“There are highly qualified people running in every race, and I think Democrats will do a far better job in funding schools and investing in what the community wants and needs. I don’t think it’s hyper-partisan to think that. The people I’ve supported are really supportive of the schools,” Lateef said.

“We can’t have a better friend on the board of county as a teacher than Maggie Hansford (Democratic candidate for Brentsville Supervisor,) he added.

Lateef said his successful leadership has been proven. “I’ve already done things differently. I have laid out a platform. I have been committed to raising salaries and I continue to do it.'”

He has taken an even tone on the board. It makes for less interesting school board meetings. "Ratings are way down," he joked.

He wants to improve the division's SAT scores and college admission rates and believes in investing in helping English language learners achieve. “In the long run, it just helps the whole community.”

And the success of Prince William County students is personal to him. He strongly believes in public education, having attended it from kindergarten through medical school. He also has four children attending Prince William County public schools from elementary school, to middle school and high school. It informs him on public education at all levels within the district.

“I have a problem when you’re not there with the knowledge base you need to really do a good job,” he said. “It drives me nuts."

He believes in listening to parents and addressing their needs and concerns.

Lateef further champions expanding specialty programs and using innovative practices in every classroom. And he strongly believes in protecting all students from discrimination.

“I think you need to elect people who care about equal rights for everyone and have a record for that.” As a physician, “we take care of everyone.” To him, equality will always matter.

Lateef is endorsed by the Prince William Education Association and the Democratic Committee.

Bristow Beat is NOT endorsing a candidate in the Prince William County Schools chairman's race. This content was sponsored by the Lateef Babur campaign for Prince William School Board Chairman. Information was provided by Dr. Babur Lateef in an interview with Bristow Beat.