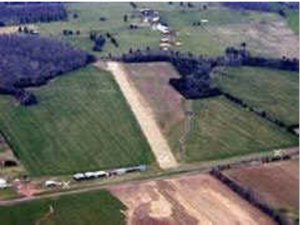 An 85-year-old Bealeton was injured while riding as a passenger in a small plane that crashed in Fauquier County while attempting its landing.

Virginia State Police were notified of a plane crash that occurred at Maples Field Airport located in 1700 block of Sowego Road in Catlett, Sunday at 1:12 p.m. Maples Field consists of a grassy runway.

"The aircraft involved was plane was a 1940 Fairchild R40-404, fixed-wing, single-engine, two seater aircraft," said Virginia State Police Public Information Officer, Sgt. F.L. Tyler. "The aircraft was attempting to land at the airport when it ran off the left side of the grassy runway and went into tall uncut grass and overturned."

Two occupants were in the aircraft at the time of the crash, the pilot is identified as William A. Hargreaves, age 45 of Lovettsville, Virginia and passenger as Donald J. Rhynalds, age 85 of Bealeton, Virginia.

The pilot was not injured the passenger was flown to INOVA Fairfax Hospital.

The Virginia State Police along with and FAA are investigating the incident to determine the causative factors that led to the crash.

Bristow Beat would like to apologize for mistakenly reporting that Donald Rhynalds had passed away. We have spoken to Charles Maple of Maple Field, the airfield from which Rhynalds and Hargreaves fell out out, and learned that Rhynalds is alive and well and recovering at home.