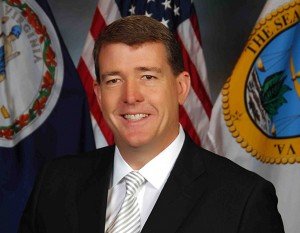 The Brentsville Magisterial District Supervisor will be without representation on the Board of County Supervisors for perhaps the remainder of the year due to laws that require a special election to follow 45-60 days after a general election. Therefore, Brentsville will not have representation on the Board of County Supervisors during important votes such as to approve or deny the hotly debated developments such as Stone Haven and Birkwood at Braemar.

Covington accepted that position Friday, September 19. Although he cannot assume the position until January 1, 2015, he immediately resigned from his position as Brentsville Supervisor and member of the Prince William Board of County Supervisors. Covington commented that his new role as judge strictly limits the degree to which he can engage in politics.

The Prince William County Board of Supervisors acknowledged Covington’s resignation during their September 23 meeting. They also voted unanimously to begin the process by which Heron could then “notify the Circuit court of Prince William County of the vacancy and petition for a writ for special election.”

County Attorney Angel Heron explained that pursuant to Section 15.2-502, Subsection C of the Code of Virginia, when there is an opening on the county board, the board must petition the court for a special election*. The board has 15 days to do so, and the court has 15 days to respond.

Subsection C applies specifically to Prince William County. At the time the law was crafted, Prince William Board members preferred holding a special election to appointing someone to fill the empty seat for the remainder of the term.

Diana Dutton of the Prince William Board of Elections said that in order to change the law regarding the special election, the Board would have to gain approval of the Virginia General Assembly. However, the General Assembly will not be back in session until December, and by then it will be too late to expedite the filling of the vacant seat.

In usual circumstances, the circuit court would try to schedule an election within the next 45-60 days. However, due to unfortunate timing of the Covington’s appointment, the special election will have to be pushed back until after the general election in November.

Heron said it is too late for any candidates to be added to the November ballot as absentee ballots have been printed, and early voting has already commenced. Instead, a special election will need to be scheduled 45-60 days following that election. The law also requires that elections be held on a Tuesday.

Thus, according to the calendar, the earliest that the special election could be held is December 23. That would be an unlikely choice for an election date since many people would be out of town for the Christmas holiday. As a result, the election may even be pushed back until January of 2015.

Meanwhile, the vote on the Stone Haven development is scheduled for October 7.

Scott Jacobs, one of two possible Republican candidates for Brentsville Supervisor, said it he thinks it is unfortunate that Brentsville will not have a representative on the Board for these important votes. However, he also does not think it would be fair to delay the votes.

“My personal feelings are I do not like the fact that we will have the seat vacant for some very large votes coming out in Birkwood and Stone Haven. By the same token, it is very hard to ask those applicants who have spent the better part of two years waiting, who have had their projects vetted from the county, one, and the community, two, that they need to sit tight for the next several months,” Jacobs said.

He noted that if Stone Haven is not approved within a certain time period the school division will not be able to delivery upon the much-needed Bristow high school. With too much delay, the school will need to be pushed back to 2020.

“A decision needs to be made on that sooner than later,” said Jacob, “But, it does no please me to note that we might not have a rep on our board.”

The other potential Republican candidate Jeanine Lawson also thinks it is unfortunate that the district will not have a representative, but unlike Jacobs, thinks delaying the vote is a good idea.

"I have already heard from Brentsville residents that they are concerned with these important votes coming before the Board when we do not have a district supervisor. I agree with the residents, we deserve the respect of having our representative hear our concerns and answer questions. Therefore the Board should delay these votes," Lawson said.

As for the Birkwood at Braemar public hearing and board vote, it has not been scheduled yet.

During the Prince William Board meeting, the supervisors congratulated Covington on his new position and Supervisor Marti Nohe (R) of the Coles District said a few words, wishing Covington well in his next endeavor.

"It is kind of a sad day for me. I am very happy for my friend Mr. Covington. He has been, I believe, a genuine public servant to this community, the Brentsville District and all of PWC for the past 11 years, and really before that. The sad news for us is that our friend won’t be there on the board any longer, but the good news is he’ll be able to provide that level of service to the community in his new role on the bench," Nohe said.