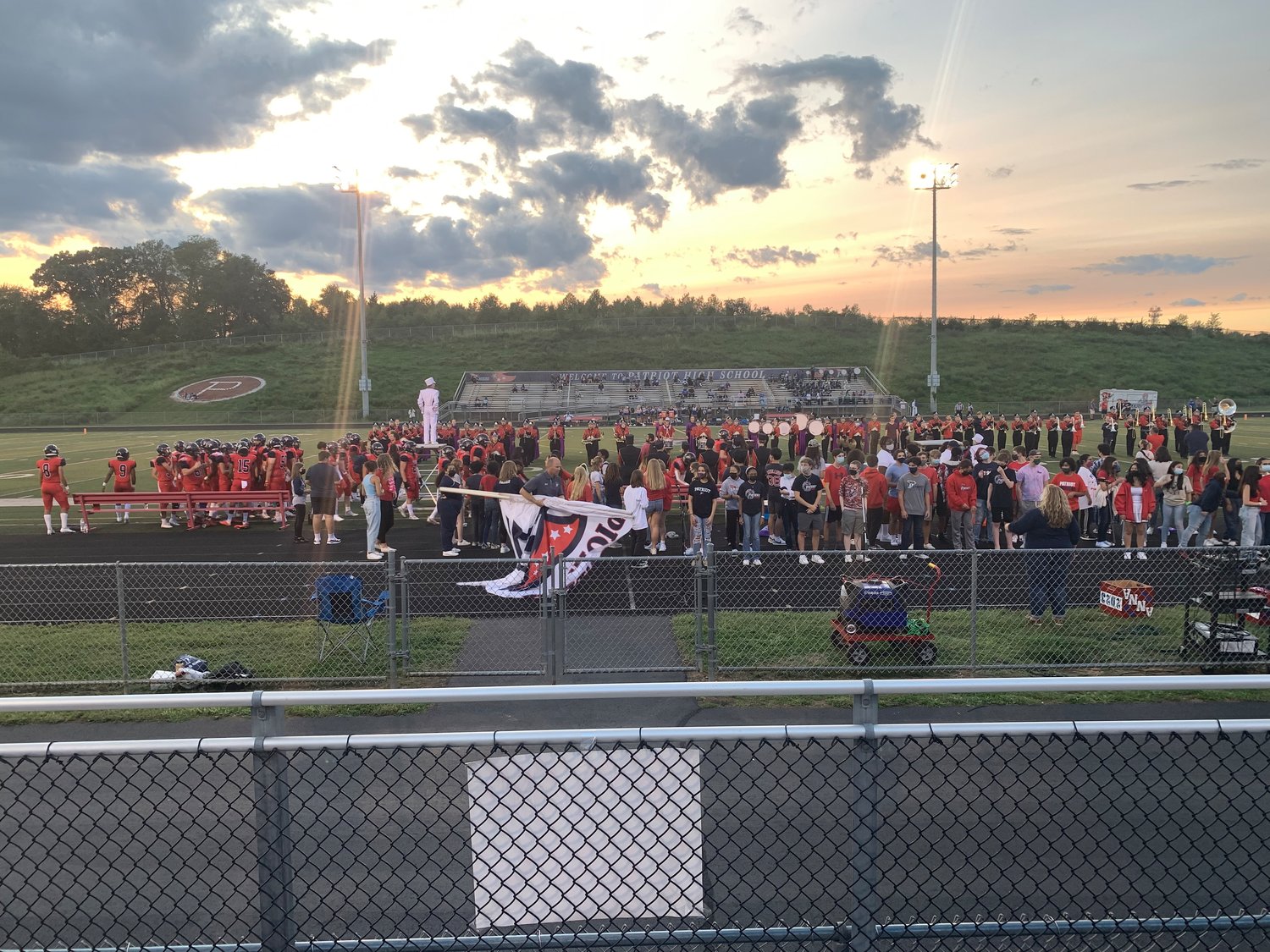 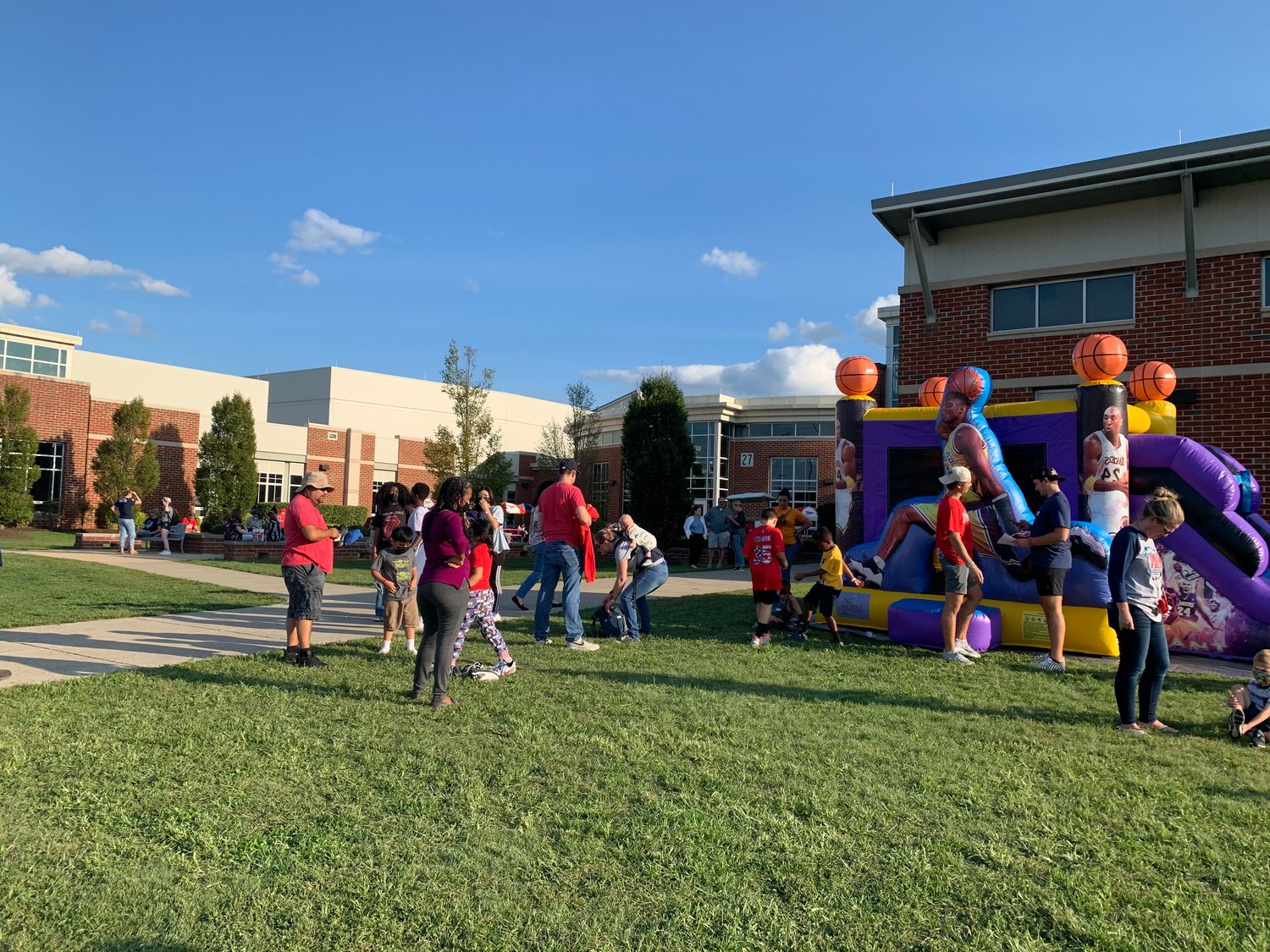 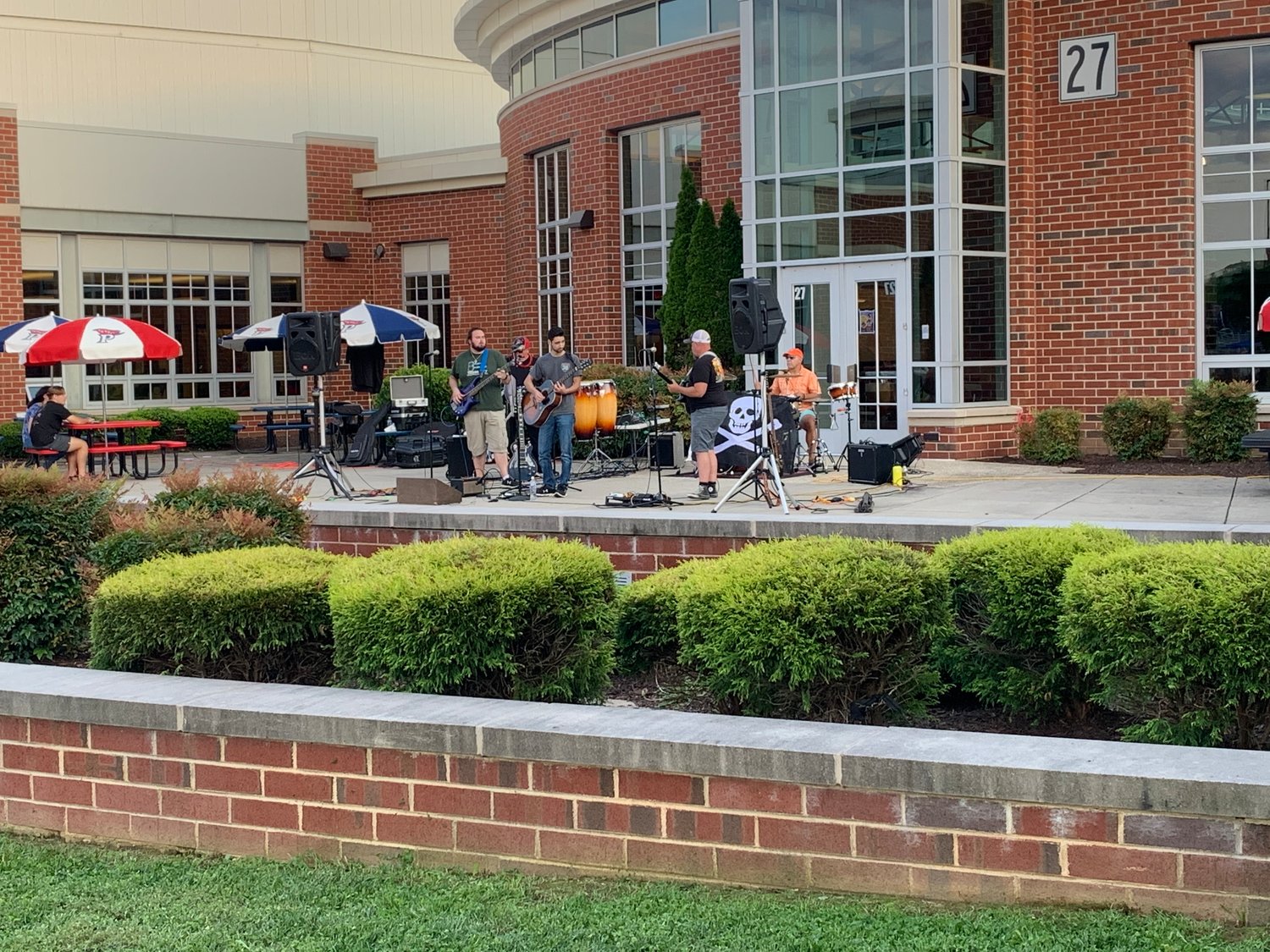 Band plays outside the school to entertain the attendees.
Bristow Beat 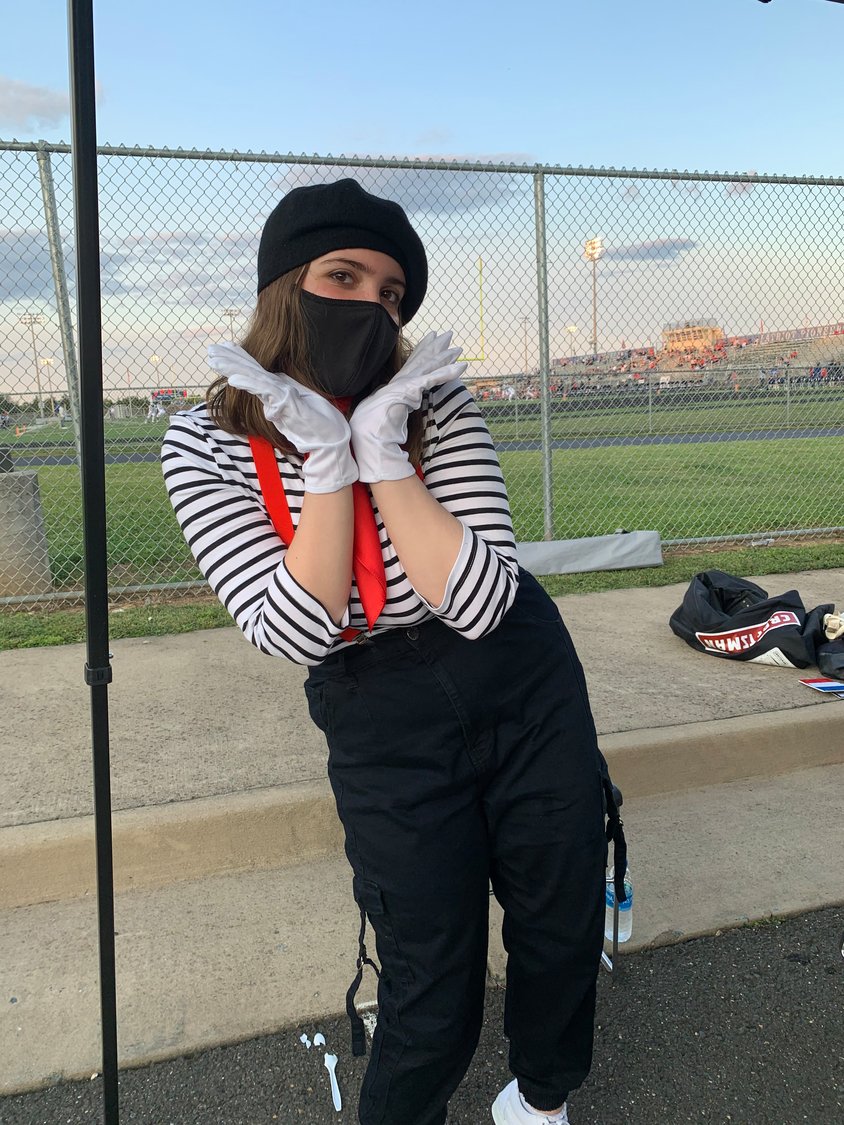 Members of 22 Patriot Clubs participated in the celebration. Here a girl from the French Honors performs as a mime. "Some of them are especially creative," said Leadership Development Teacher, and lead organizer of the event, Sharon Shipman.
Bristow Beat 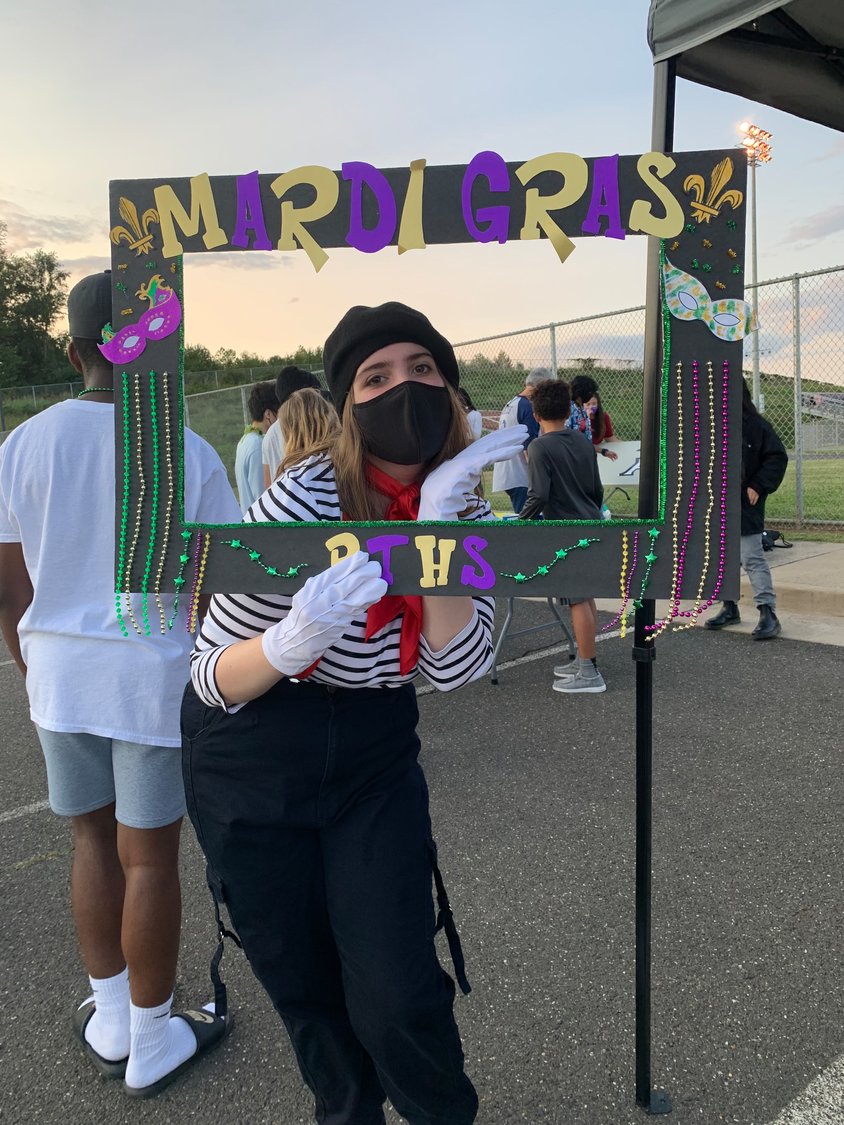 French Honor Society invites children to pose for a photo either by themselves or with a mime.
Bristow Beat 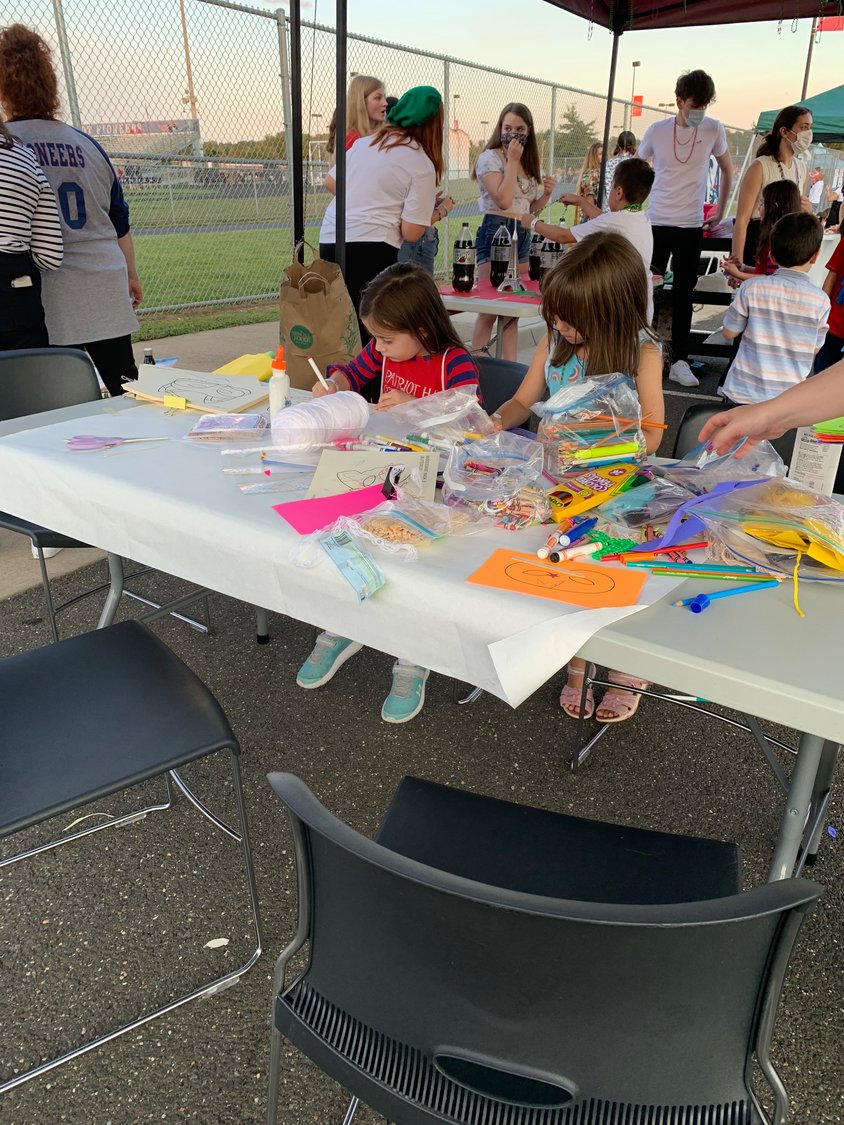 Children create masks at one of the student operated club booths.
Bristow Beat 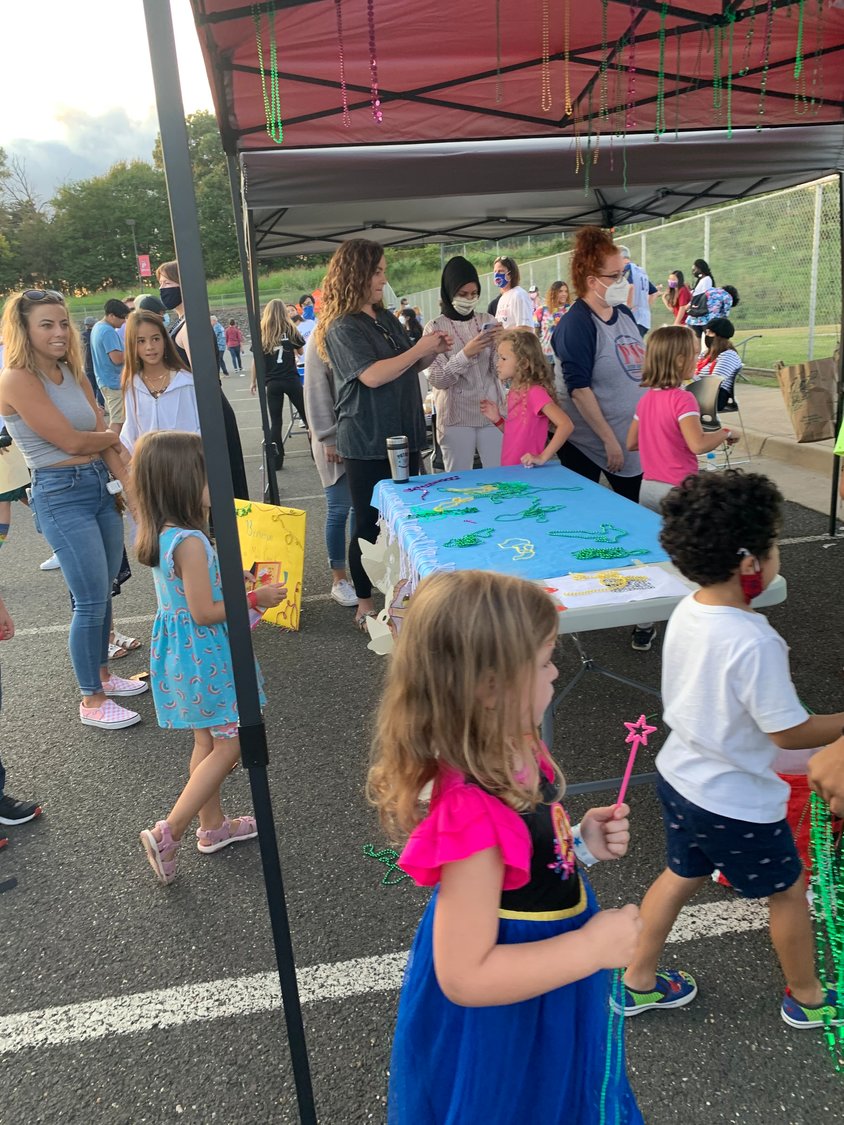 Children visit booths created and run by school clubs where they play games and do crafts. T. Clay Wood Elementary School children were invited as well as family members of staff, students and alumni.
Bristow Beat 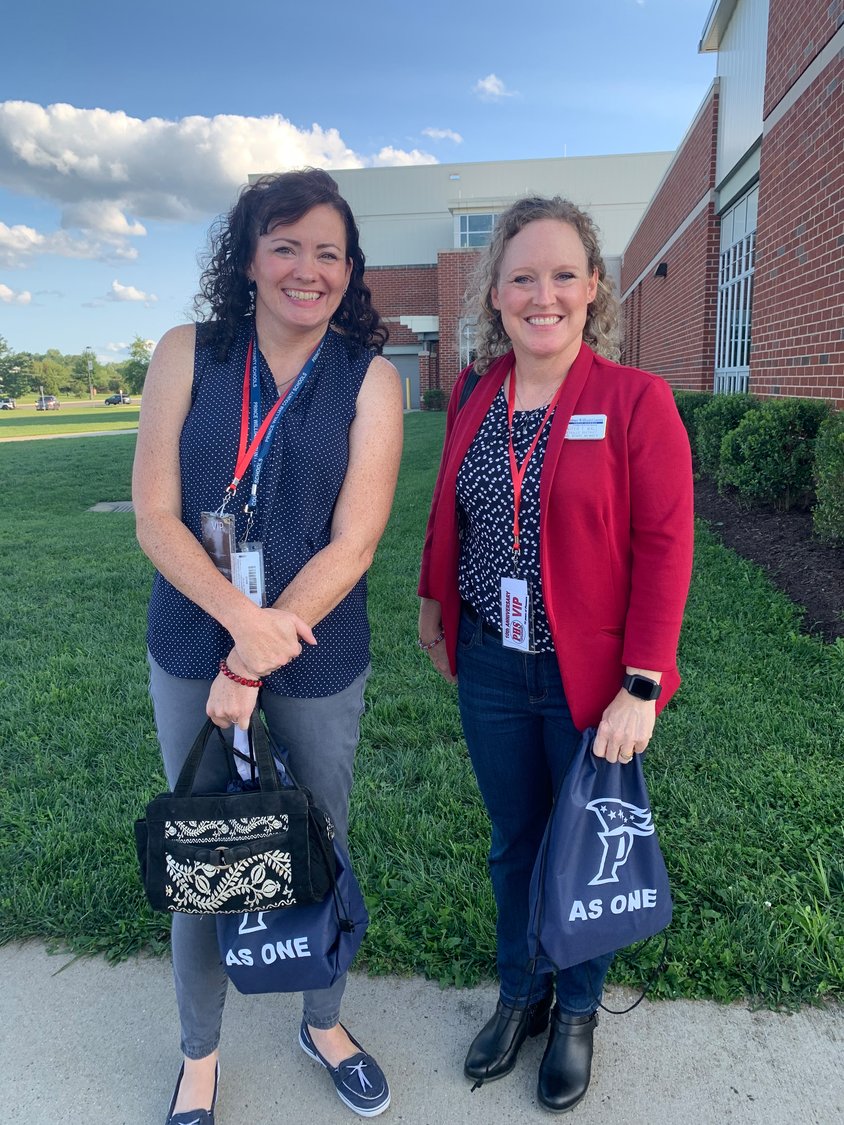 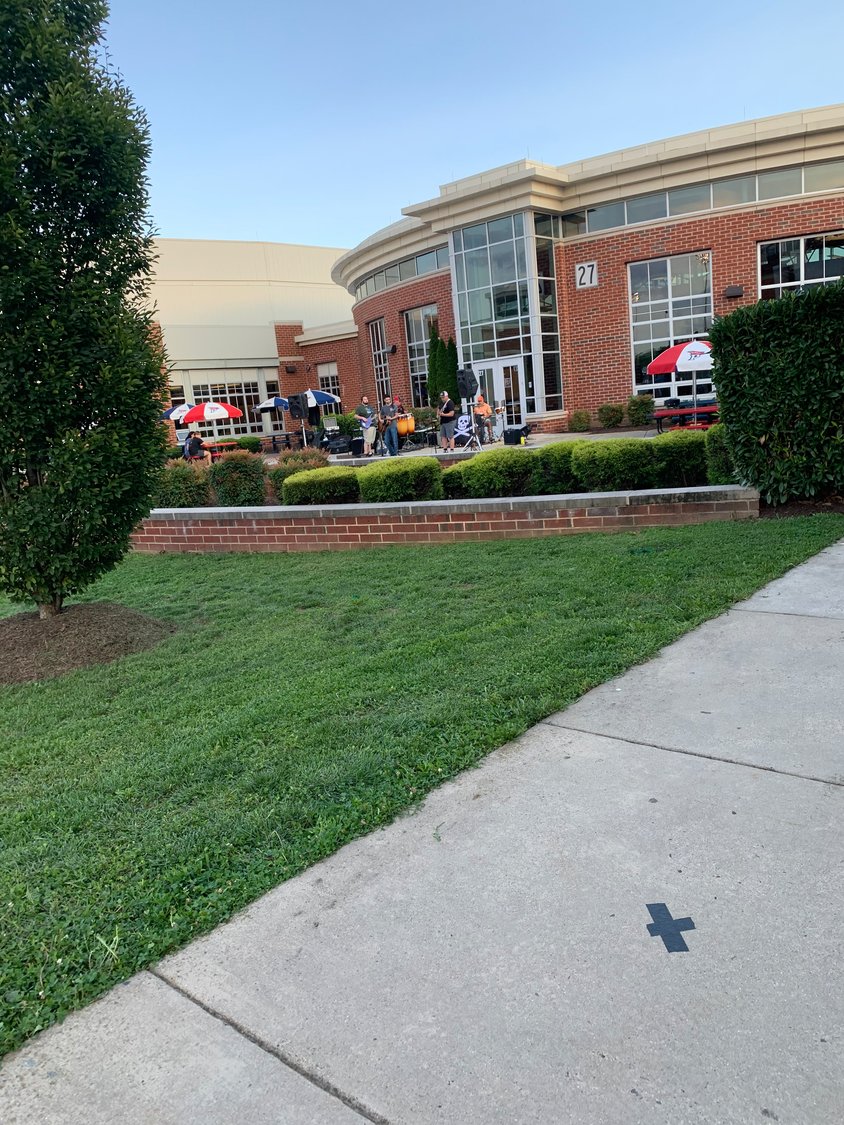 VIPs including Police Chief Peter Newsham and School Board Chairman Babar Lateef are treated to dinner by the Patriot Culinary students.
Bristow Beat 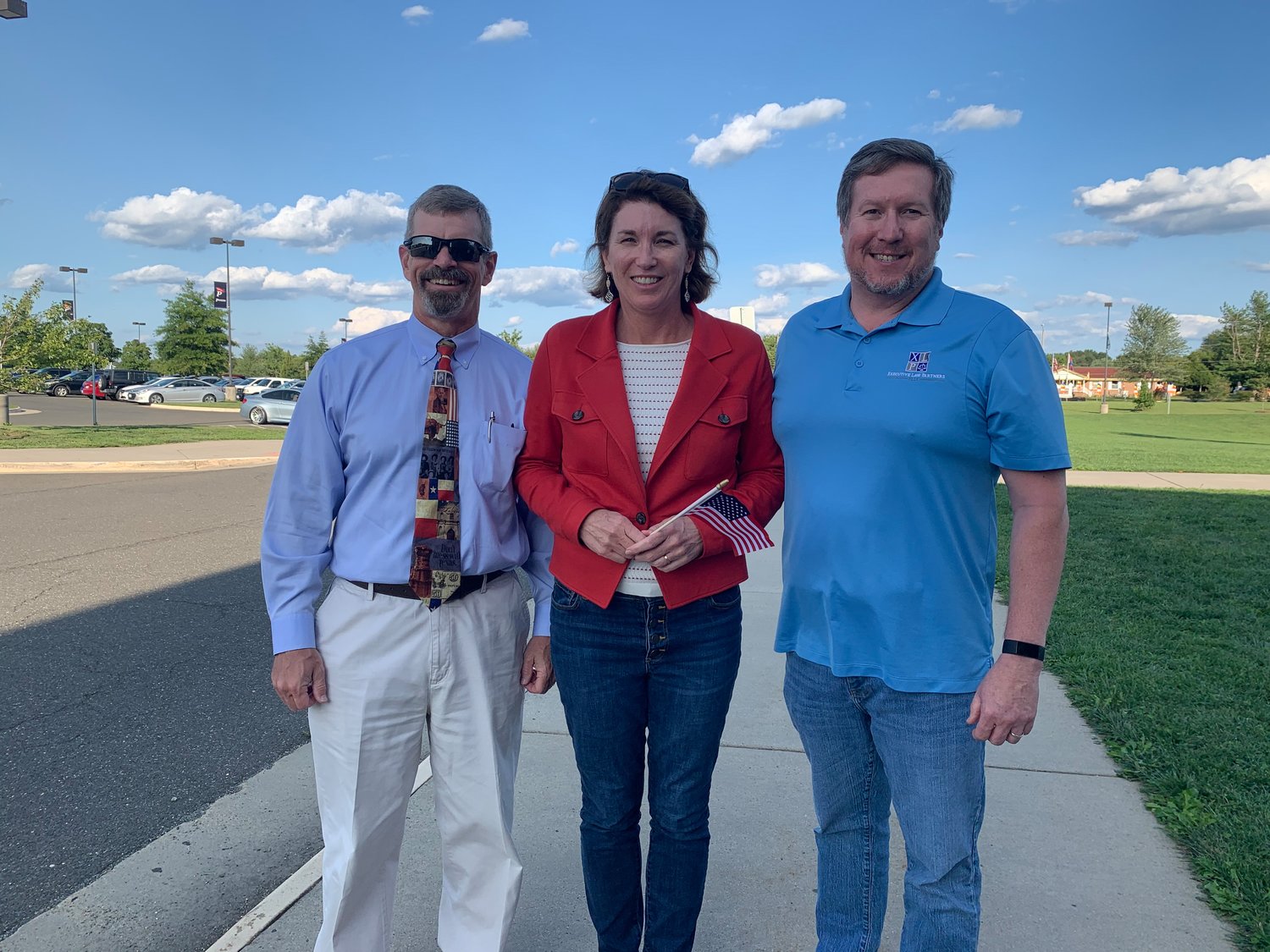 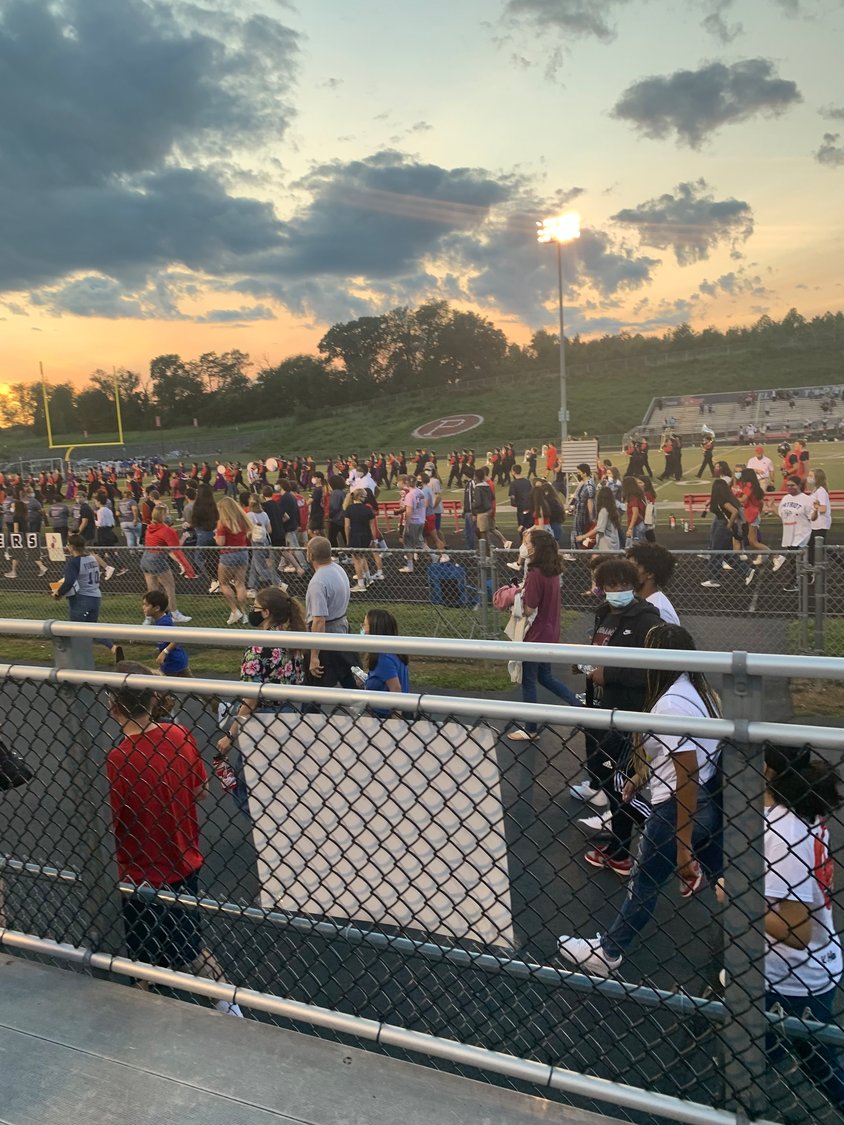 Students: band, cheerleaders and football players gather on the field. The school also recognizes VIP visitors and the custodians who have worked so hard over the past year.
Bristow Beat 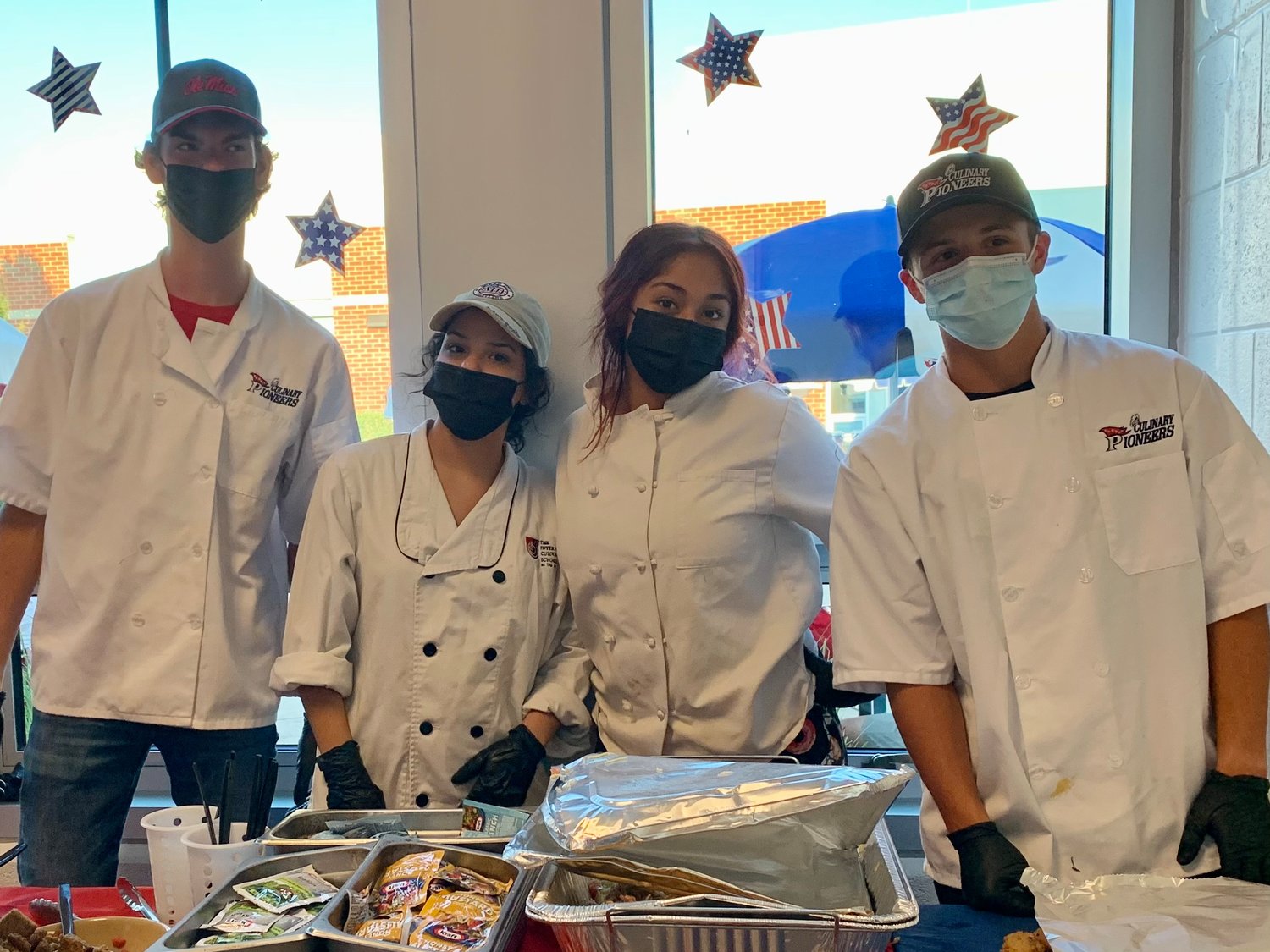 Patriot HS culinary students were excited to get back into the kitchen after a virtual year. They provided dinner to the VIP guests while other attendees got a "Taste of Bristow" from several local restaurants.
Bristow Beat 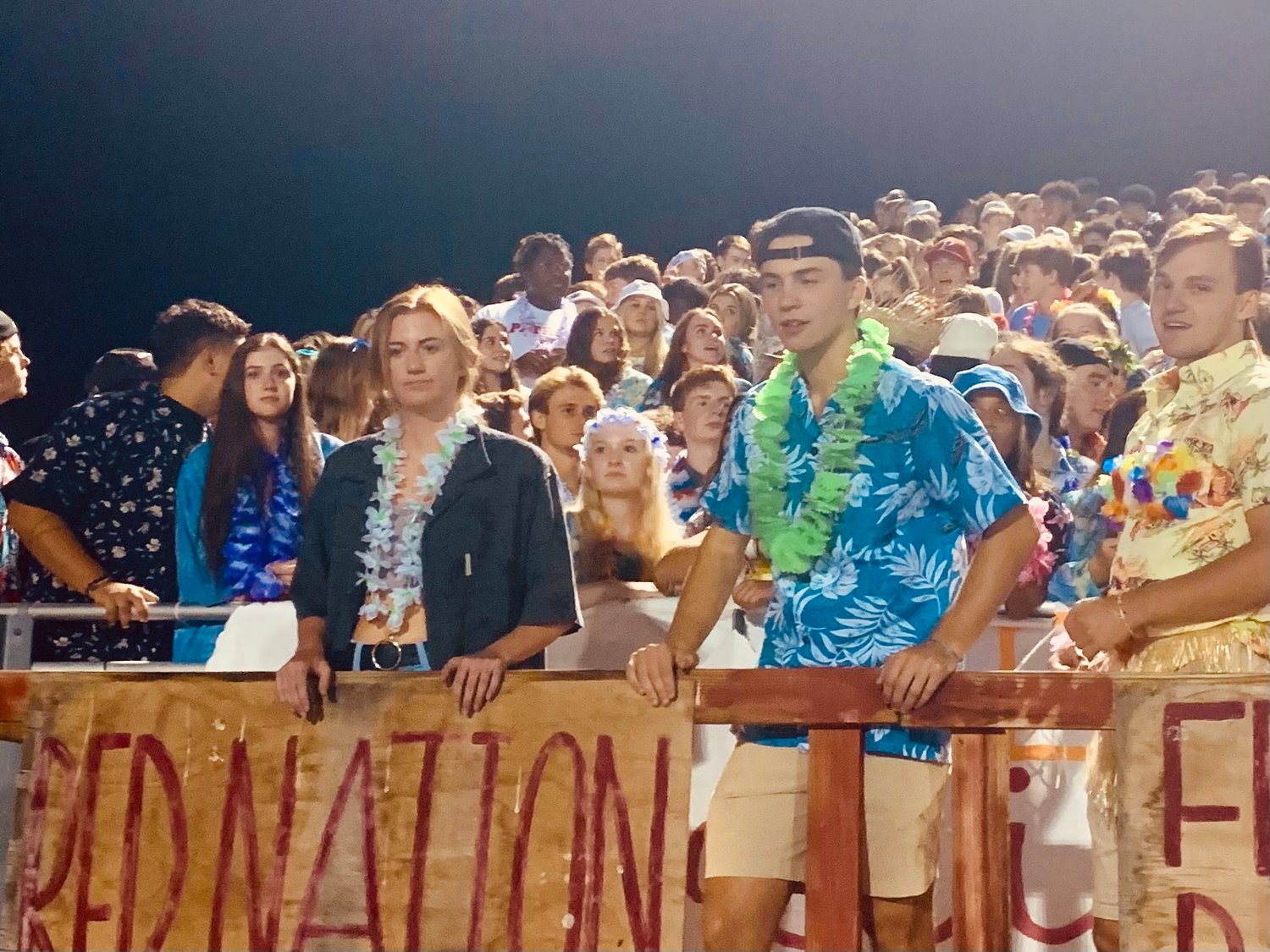 Current Patriot High School students and alumni join "Red Nation" cheering on the Patriots at their 10 year celebration game. The theme of the night was Hawaiian or tropical dress.
Bristow Beat 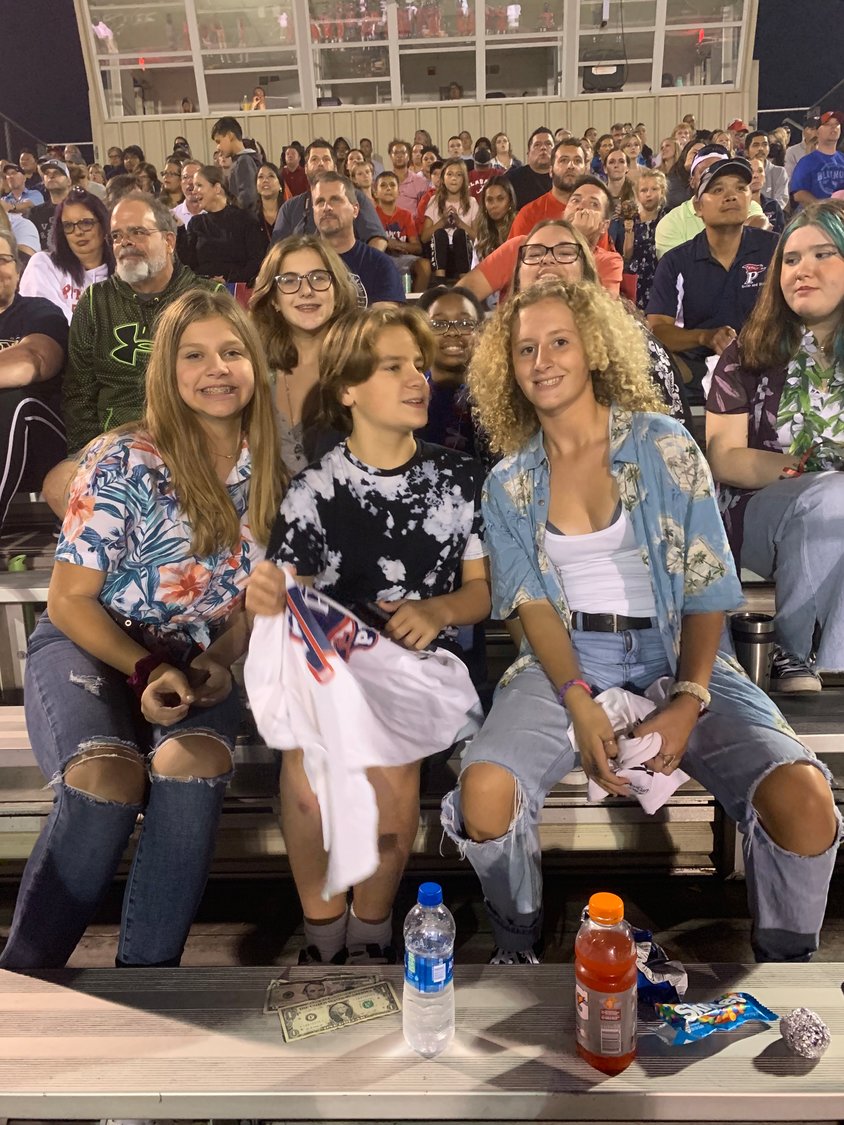 It had been a while since Bristow residents took part in a large outdoor festival, but that all changed on Sept. 10, 2021. That evening, community members came together to celebrate the 10 year anniversary of Patriot High School and T. Clay Wood Elementary School; the two schools sits adjacent to each other on Kettle Run Road in Nokesville

Both schools opened in 2011 to relieve overcrowding at existing schools. Since then, they have made a mark on their community, serving thousands of students and changing lives.

The event began with a small parade from T. Clay to Patriot, featuring the Patriot Marching Band, police and fire trucks.

The following acctivities included bounce houses, live music, and student-run games and activities. Community restaurants sold a 'Taste of Bristow,' and culinary students cooked a buffet feast for VIP visitors. The celebration was followed by a football game against Forest Park High School, in which the Patriot Choir performed the Nationa Anthem in honor of the heroes af 9/11.

The school recognized its custodians, the heroes of Patriot during the 2020-21 Covid Pandemic.

Patriot Principal, Dr. Michael Bishop, got the idea for the 10 year celebration at the end of the last school year. He deputized Sharon Shipman, Leadership Development Teacher and SCA Advisor to lead the efforts.

Shipman delegated to 22 school clubs whose members agreed to participate, and each found a way to contribute. "Some of them are especially creative," she said, nothing the Law Club held a Star Wars trial.

Shipman was very happy with the big turnout. "It's really amazing to see our community come together."

Students sold more than 400 wristbands on Friday at school, and many more people and bought wrist bands at the event. All proceeds after expenses will be split a among the various clubs and sports that participated.

Patriot Principal Dr. Michael Bishop, said when he started planning the event he told his staff, "let's do something to bring the community together." When he was growing up, the high school was the center of his community, so that is what he was going for with this event.

Bishop said the end result was "fantastic." He thanked his staff and students. "We were able to pull this of because it was a lot of people's hard work."

School board members were excited for the event as well.

"I think it's awesome. This is wonderful," said Gainesville school board member Jennifer Wall. "People need positive things to look forward to that bring us together. People want to stay connected to one another,"

Adele Jackson, Brentsville school board representative shared that sentiment about the event being awesome.

"I'm really glad we all got invited and are coming out here to celebrate [Patriot High School and T. Clay Wood Elementary]," Jackson said, praising both the schools as excellent.

Patriot High School was one of many new schools that Milt Johns opened during his time as School Board Chairman At-large, when the western end of the county was undergoing rapid growth.

"I'm very proud of what the school board did," said Johns, noting that Patriot remains one of Prince William's crown jewels. He praised Dr. Bishop, and everyone who made Patriot High School and its community what it is today.

Former Brentsville representative Gil Trenum said he has passed Patriot High School almost daily over the past 10 years, but he still remembers when they first broke ground on the building. "It's a great success story," he said.

"It's an excellent celebration for our community," said Supervisor Jeanine Lawson. She said it was aptly named "Patriot High School," and even though it was not specifically named after the heroes of 9/11, she feels it is the appropriate venue to recognize the 20 year anniversary of 9/11.

Many student, families and visitors went on to watch the Friday night football game. Red Nation students, who cheer on the Patriot, dressed in Hawwaiian theme.