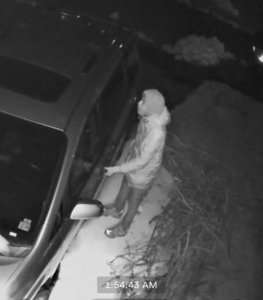 The suspect is seen opening the door to resident's car. He appears to be young, thin built and light skinned.

Prince William Police responded to a vandalism/ vehicle larceny call Feb. 22, at 2:28 a.m., at a residence in the 13400 block of Dodsworth Drive in Bristow.

Just before 2 a.m., surveillance video outside the home shows what appears to be a young man sneaking up to the home and opening the door of a car parked in the driveway. The vehicle was unlocked and opened easily.

Upon being seen, the suspect, said “sorry,” and ran off.

The resident, who spoke with Bristow Beat, said the suspect had taken cash from her vehicle. She also said that the responding officer not only took down the details but stayed to search the neighborhood.

The woman also immediately reported the incident on a Kingsbrooke Facebook page to tell other residents what was happening. Later Monday morning, a neighbor responded saying that items had also been taken from her vehicle that night.

Residents say there have been similar incidents occurring in the neighborhood especially around Dodsworth Drive. The HOA had even posted an electronic sign reminding everyone to lock their doors.

Another resident wrote that about a month ago her car that was locked broken into. Nothing was stolen from the vehicle as there was nothing of value in it at the time. She does not know if the incidents were connected.

Larceny by auto is quite common in residential neighborhoods and Carr advises everyone to protect their property.

“We encourage everyone to practice T.L.C.: Take your valuables out of your vehicle; Lock your vehicle; Call the police if you see anything suspicious (703-792-6500).”