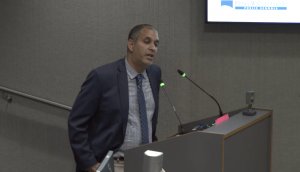 The funding approval coincides with the first day of the 2020-21 school year. PWCS has started the year with approximately 98% of its students learning from home.

The county received $41 million in CARE funding in May and then another round of $41 million in July. Meanwhile, in spring, Prince William County Schools received $9.2 million of CARES Act funding via the Commonwealth of Virginia.

The Board of Supervisors spent its first $41 million to fund county needs: mortgage relief, small business relief, COVID-19 testing and the Prince William Health District, addressing the needs of the homeless population,  a community-feeding Taskforce, PPE for county staff, devices for teleworking employees, and helping the county's four towns.

From the second round of funding, the board transferred $5 million to the school division as per a July 21 vote. The money was to be used for computer devices and PPE. However, the school board continued to request more funding.

With the request for funding on the agenda, Tuesday, supervisors said they needed more clarity on the schools' needs and expenses since Chairman Babur Lateef last presented in July. Thus, the board called upon Chairman Lateef who brought along Vice Chair Loree Williams, and Associate Superintendent of Finance and Risk Management John Wallingford to address the board.

Once arrived, Lateef explained that even though the division is starting the school year mainly virtually, it is not saving much on operational costs. With approximately 1,200 special education and ESOL students utilizing in-school services, school buildings will be open. Buses will also be running, a large fleet because of the need to social distance.

Last spring they saved between $7 and $8 million as school buildings were closed. However, they continued to pay staff including substitutes and bus drivers. As such, PWCS used their own CARE funding within the last months of school. The division bought students laptops at $11 million. They also purchased PPE for teachers and staff working in schools.

But the school division still has expenses to fund. If possible, they will open at 50% capacity in a “hybrid” virtual/in-school model for the second marking period, bringing with it a need for more PPE and operational costs.

Board members expressed that it was never that they did not want to fund the schools; they simply did not feel they had adequate information to make that decision.

“When you go from a model of hybrid to 100% learning, besides the select few that go in, I think most people would think there would be some change in the budget,” said Gainesville Supervisors Pete Candland (R). “I’m not looking here to beat up anyone. I’m not here to get you to run through a bunch of hoops, I just need something more than a paragraph to know why $20 million (needs to be transferred here.)”

Lateef said the schools have only $17-18 million set aside, its usual 1.5% of funding they feel they need to keep on hand, and hoped to use for deferred projects. Additionally, all CARE Funding needs to be spent by the end of the year.

Lateef said he would follow up on any of the board members questions he had not answered, and said that he would like to have more conversations between boards.

Supervisors were understanding. “You all are doing a yeomen’s job. No one could have prepared you guys for the maelstrom that you walked into opening the schools,” said Occoquan Supervisor Kenny Boddye (D).

Lateef ended with asking for the supervisors' full support. “I think all of our students and families and teachers would be very appreciative,” he said, adding that their board has done an  “outstanding job,” during the crisis.

The board then voted voted without further discussion, and the motion passed unanimously.

This article may be updated to include more information.