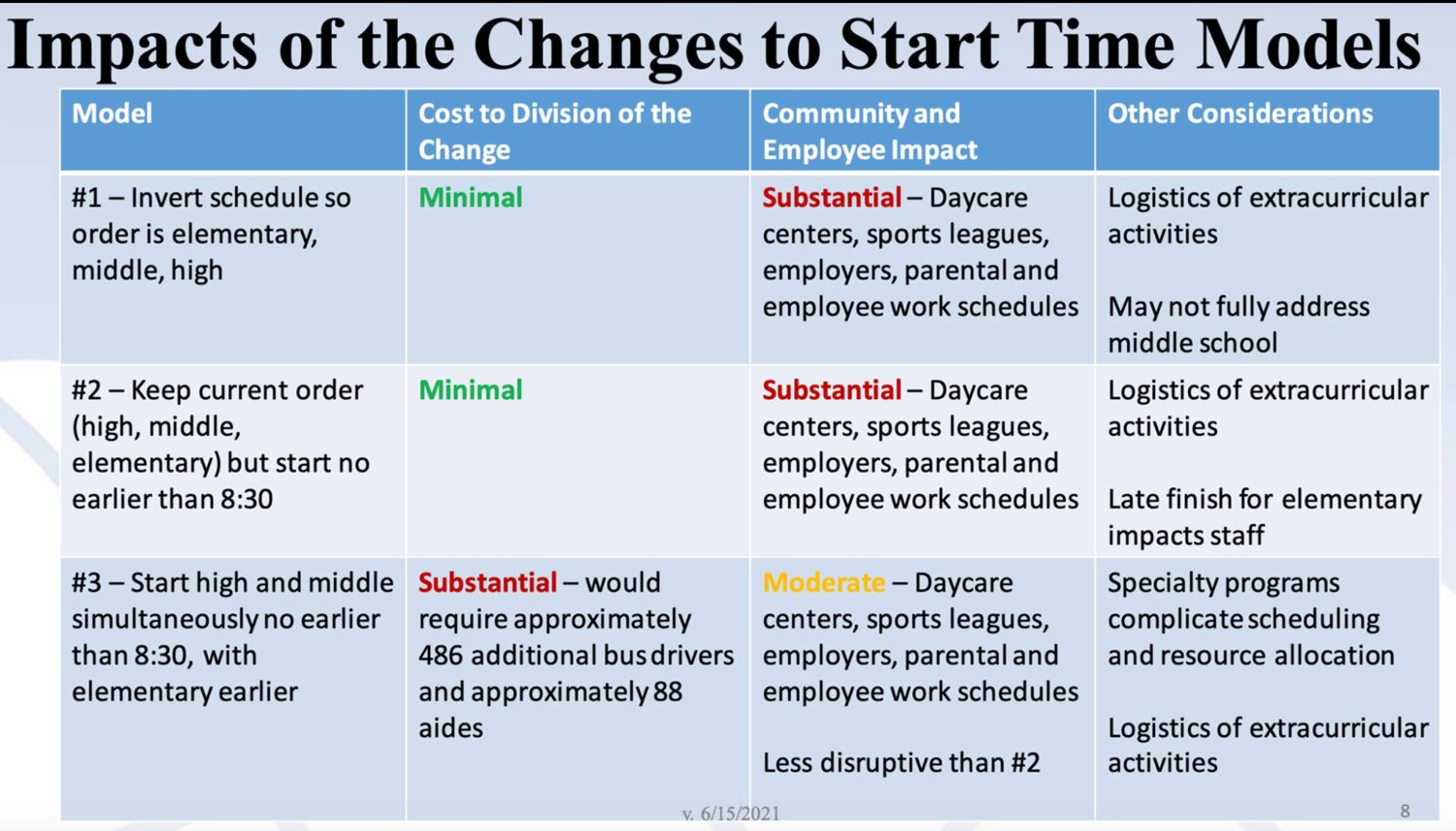 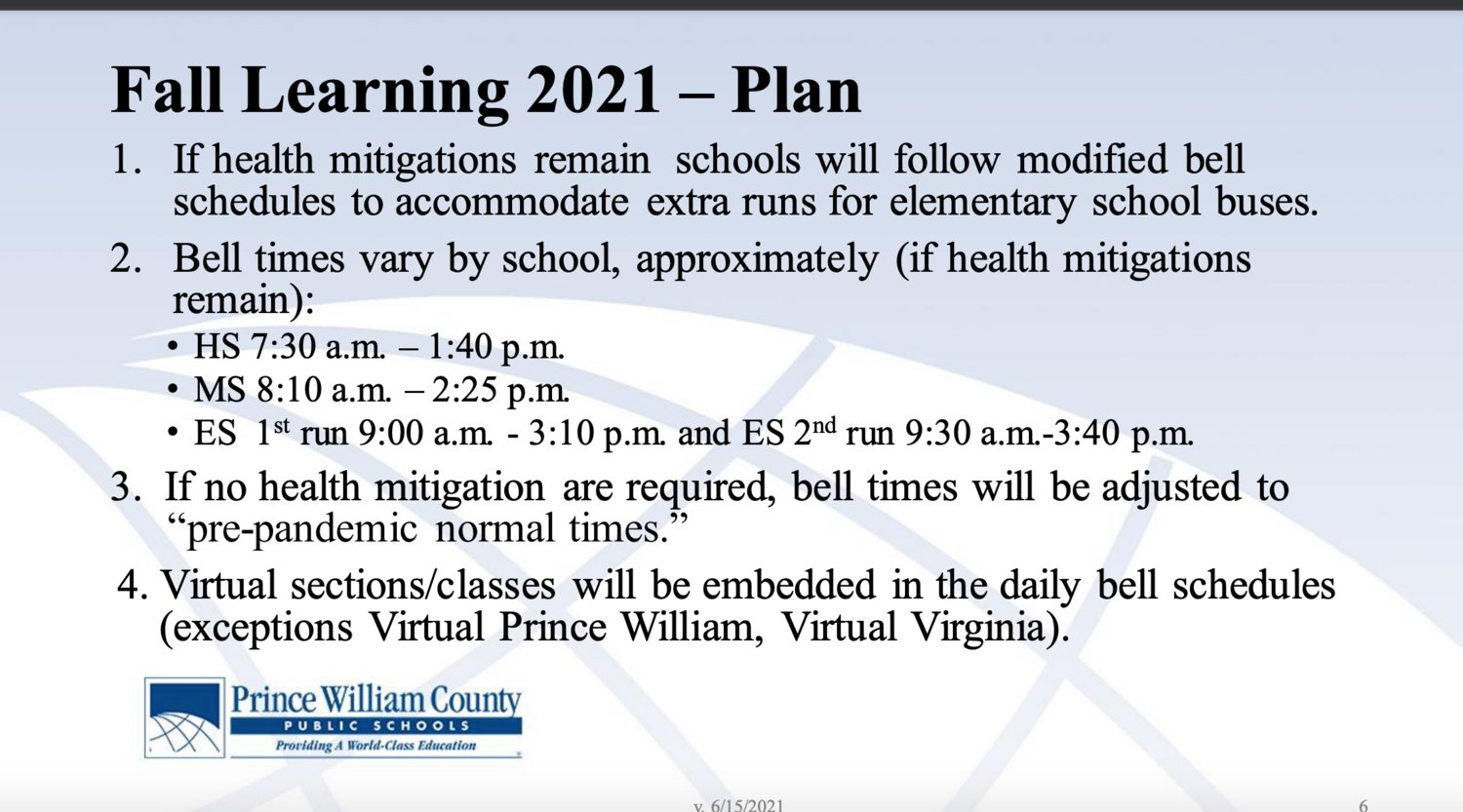 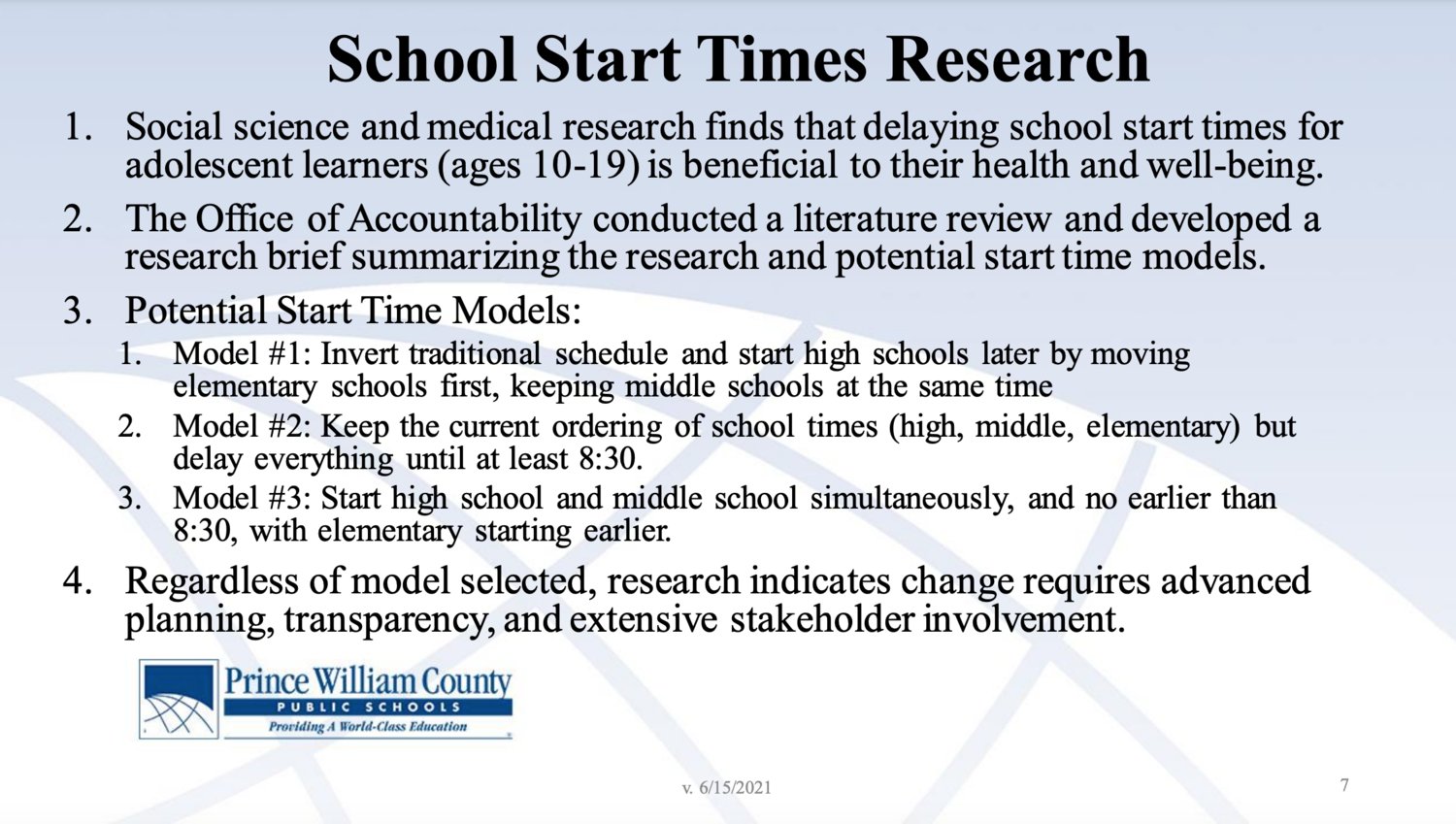 Prince William County Schools is considering alternative school start times for the 2021-22 school year as part of its “Return to Learning Plan." The school board will hear those options in a presentation at the June 16 school board meeting.

Currently, the defaults plan is to resume pandemic “Return to Learning” bus schedule.  After mitigiations measures end, the school division can choose to return to its original bell schedules to do something completely different.

Somes options include reversing start times for elementary, middle and high schools, or starting all schools later. These options could provide significant health rewards for teens and tweens.

Prince William County Schools is assuming that some COVID-19 health mitigations will remain in place at the beginning of next year.  Social distancing  would require more bus runs, thus affecting start times.

If this is the case, pandemic “Return to Learning” start times will resume.

Bell times may vary by school, but  are approximately...

“If no health mitigation are required, bell times will be adjusted to ‘pre-pandemic normal times,” said a staff statement on PWCS board docs.

Despite that last statement, the very next board slide PWCS presents alternative schedules that would allow for teenagers to start school later.

Natural circadian rhythms dictate that adolescents are "night owls" who are typically are not tired until 11 p.m. or later. Teens and tweens also need  approximately 10 hours a night. Adolescent minds function best when they go to bed after 10 p.m. and midnight wake up at 9 a.m or later.

“Social science and medical research finds that delaying school start times for adolescent learners (ages 10-19) is beneficial to their health and well-being," says

“The Office of Accountability conducted a literature review and developed a research brief summarizing the research and potential start time models.”

Starting at 10 a.m. or later (the ideal college schedule) is not an option for most high schools;  Prince William County Schools starts high school at approximately 7:30 a.m.

However, the school division cannot start everyone at 9 a.m. and still employ  the same buses and drivers to deliver elementary, middle and high school students to school. The community would have to make some decisions.

Schools could have to continue to stagger start times or incur signicant costs for busing.

Regardless of which option is chosen, changing start times would have dramatic repercussions for parents, sports and daycare,  after school activities and businesses. Sports would end later. Parents may need after school babysitters for youner children.

But a new plan could also yield benefits. Some elementary may no longer require morning daycare, and many younger students who are earlier risers could start school sooner.

2. Model #2: Keep the current ordering of school times (high, middle, elementary) but delay everything until at least 8:30 a.m.

3. Model #3: Start high school and middle school simultaneously, and no earlier than 8:30, with elementary starting earlier.

On board docs provided table demonstrating how each option would positively and negatively affect the community. (See image slider at top.)

To allow middle school and high school to start at the same time, no earlier than 8:30 a.m., would require 486 bus additional drivers and 88 aides.

Inverting the school schedules so that elementary starts first, then middle school and high school, is more likely, and could win support from parents who want their older students to get the sleep they need.

For that reason, it is unlikely the board will act quickly in accepting the new model, and even less likely it will be in place when school returns in August.

If not now, then when?

The idea of changing start times, though controversial, has generally been met with good response from the Prince William community. In a debate for School Board Chairman, Chairman-At-large Dr. Babar Lateef said he is he was for it.  However, so far, no board has been willing to pull the trigger.  And the past year was absolutely not the right time.

However, the pandemic has also altered rigid views on education. Parents, students, teachers and bus drivers have been forced to to weather so many dramtatic changes that were beyond their control. When compared to learning virtually from home, or attending school in-person only 2 days a week, adjusting  start times  seem minor. That could make this the perfect time to institute the change!