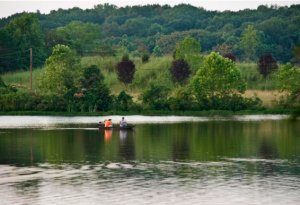 Many Prince William residents have recently voiced their concerns about the county's decision to hold Tough Mudder Virginia 2019 at Silver Lake Park in Haymarket on June 1 and 2, and the effects it may have on the passive recreational park.

Located in Haymarket down a dirt path off rural Antioch Road, Silver Lake Park in Haymarket is a quiet county park surrounding a small lake. It is intended for trail walking, fishing, boating (without motor) and nature watching. It is easily accessible and all one has to do is get the right equipment for fishing from Fly Fisher Pro and get started. On any normal day, you'd see the fishing beanie of the fishermen from afar, hunched over to the side of the bank, fishing. On most days one would find the atmosphere at Silver Lake peaceful and serene; it a hidden gem in Prince William County.

In contrast, the Tough Mudder is an extreme race in which thousands of participants run through mud, crawl through ditches and scale walls to test their strength, endurance, and willpower. The event will attract approximately 9,000 participants to Silver Lake Park in addition to those who came to watch the action.

To prepare the park, the Tough Mudder people are there right now building ditches and erecting structures, everything needed to make the trail and fields into an obstacle course and race track.

While it sounds like an extreme mismatch, the county bid to host the event because of the tourism revenue it could provide. The people at Parks & Recreation believe the event should provide a temporary boom for local hotels, restaurants, shops and gas stations.

People will come from all over the state and region and frequent businesses in Haymarket, Gainesville and the surrounding areas. Hopefully, some of those weekend warriors will return to experience more of Prince William County.

The Tough Mudder is expected to bring in between $1.6-2.5 million in business that weekend, according to Brent Heavner, spokesperson for Prince William County Parks & Recreation. This is based upon the experience of other counties when they held Tough Mudder events.

He explained it is exactly the kind of large-scale event that the Prince William County Office of Tourism seeks to help economic growth and promote the county.

“It is an opportunity to showcase Prince William County as a tourism destination,” said Heavner. The visitors will also “utilize our hotels, our restaurants and gas stations.”

Like any other event, such as a little league tournament, in which the county provides the fields and in return, they get business from the visitors.

Additionally, the tourism tax would provide revenue to the county that would be beneficial to homeowners as well. The tourism tax is 7% on hotel stays.

With a short period of time before the races, community members have expressed concern that the event will disturb the peaceful park and create a traffic nightmare.

The park closed on May 27, the Monday of Memorial Day, and will open again on June 3. They wonder what it will look like when it reopens.

They also questioned the process for approval of the event. Why it was not more public, and was there a public hearing and a vote on the matter?

Will the park be returned to its original condition?

Heavner, says yes, Silver Lake Park will be returned to its former condition.

This includes filling in holes and replanting grass seed. And no trees were removed on parklands only on adjacent private property.

What if the Tough Mudder does not do a good job? Is the county on the hook for that?

Should Tough Mudder not adhere to its contract in restoring the park, the county could withhold its tourism grant as the county agreed to provide a small portion of the tourism revenue they collect that weekend back to Tough Mudder.

Heavner said that grant is a “means to incentivize organizers to bring events like this to the county.”

Will wildlife be disturbed?

Heavner said the rangers and trail managers with Parks & Recreation have determined the event will have no long-term effect on the wildlife at Silver Lake Park.

“We are confident that the wildlife viewing experience will be the same.”

Agreement to Use Parks

Who initiated bringing the Tough Mudder to Silver Lake?

The idea to bring the Tough Mudder to Prince William County began with the Office of Tourism, which is now a subdivision of Parks & Recreation. They wanted the event because it attracts thousands of visitors who will spend money in the area.

Attracting large tourist events to the county is part of the mission of the Office of Tourism.

Who voted on this?

The Prince William County Supervisors never held a vote on the whether or not the Tough Mudder could be held at Silver Lake Park, nor anywhere within the county.

The Committee of Parks & Recreation and the Tourism Advisory Board, both of which are appointed by the Board of County Supervisors, made the decision to enter into the agreement with the Tough Mudder.

Supervisors were consulted on the issue, and Supervisor Pete Candland of the Gainesville District was part of the discussion. That does not mean all supervisors were in agreement.

Heavner said that the county is within its right to apply its temporary use policy to Silver Lake Park, meaning that the park could be used for a short period of time for a special event and then return to its intended use.

“There is no specific policy governing special events within parks,” he said.

But residents question whether that is consistent with the original park proffer that stated a limited use for the parkland.

How much was the county paid for park use?

Another point of contention is that the county only paid $2 for use of the land. That is because it was not about the money they made for renting out the park, said Heavner, but the economic activity hosting the event would bring the county.

Heavner said it is akin to a little league tournament, they wanted to host it to gain revenue for the community.

Was there money donated?

But, Tough Mudder charges over $100 per participant and will get a portion of the tourism revenue Prince William County receives, so it will make money on the enterprise.

There will also be vendors at the event.

Where will people park? Will traffic be impossible along Antioch Road?

Parking and traffic will not be as bad as some may assume.

Parking for the event will be held at three locations, two VDOT commuter lots and Battlefield High School. From there, attendees can take shuttles to Silver Lake.

And there will be a fourth location, Ronald Reagan Middle School, for Tough Mudder staff and vendors.

There will be no parking at Silver Lake itself as to not have an excess of traffic on Antioch Road or Route 55.

Additionally, races will be “flighted,” meaning there will be start times throughout the day so not everyone will show up at the same time.

Who approved school use?

The Prince William County Office of Tourism booked use of the Reagan Middle School parking lot through PWCS Community Use for the Tough Mudder event, according to the Parks & Rec. The parking lot is for parking use only. No other part of the school nor school grounds are being used as part of the event.

Gainesville School Board member Alyson Satterwhite expressed concern that she, nor the school board, was not part of the discussion, and that the Tough Mudder would use the schools so close to the end of the year when teachers may need to enter the school building over the weekend.

He said that while there was not a public vote, considering the residents' responses to this event, it is something he would certainly consider for similar events in the future.

He said the hope is that the Tough Mudder is bringing in tourism dollars giving a positive face to the county.”

"The test is going to be whether that brings in enough economic development.”

If it does, it will be a win for residents as well, because it means bringing in additional tax revenue to the community "by those folks staying in our hotels, restaurants, shops and gas stations, all located in our community.”

Candland also said he visited Silver Lake Park, Tuesday, to talk to people from Parks & Rec. and Tough Mudder. He found out that trees were not being cut down and that the park will be restored at the expense of the Tough Mudder people.

Dave Larsen is just one Haymarket resident who questions the process of approval or whether the Tough Mudder will ultimately be beneficial to the county.

Larsen said he likes to walk through the park and also has a friend who teaches a nature science class there, but that class had to be relocated because of the Tough Mudder.

While some people are just hearing about the Tough Mudder, Larsen said he has been asking questions of Parks & Rec. since January and he is not completely satisfied with the answers he has received.

Primarily, Larsen has concerns for the restoration of parklands. He said the park was never intended for the purpose of holding large events. He said it was almost given to the Bull Run Moutain Conservatory rather than the county to make sure it would never host such events such as sporting events or concerts.

He even believes that holding this event is in violation of the park’s easement, which specifies use.

Additionally, he does not believe that the county will make that much money in tourism taxes since not everyone coming to the races will be staying at hotels. Additionally, he said no one is talking the money the county had to spend on park preparation, police and EMT services.

“I honestly don’t think they are going to be making a lot of money from this,” he said.

He also resents how the county went about approving the event, without any public input, a public hearing or a public vote and said they hoped to put it past people.

“I don’t think they expected the level of public outrage, unfortunately, it’s at the last minute,” Larsen said.

He hopes everyone has fun this weekend, but feels holding the event at Silver Lake Park is a mistake.

“This is our world. This is all we have left, and you can continue to abuse it for your own amusement, or you can start taking care of it, and someone has to take care of it.”