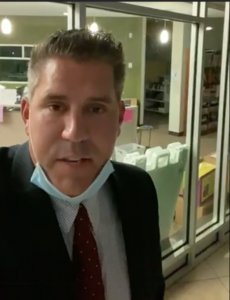 Gainesville Supervisor Pete Candland videos himself in the Kelly Leadership Center after walking out on a joint meeting with the Prince William County School Board on Dec. 8.

The community is responding strongly to an incident in which the three Republican members of the Prince William Board of County Supervisors walked out on a joint meeting with the school board, rather than watch an informational presentation on Unconscious Bias.

School Board Vice Chair and Woodbridge representative Loree Williams said she believes that everyone could benefit from a presentation on Implicit Bias as it serves to create greater self awareness, which can help everyone to represent diverse populations.

However, the Republicans questioned the time and the place.Before leaving, Candland made the following speech.

"The fact that we’re talking about this when we’ve got a global pandemic happening, when we have kids who are floundering at home, we we’ve got to figure out how we are going to fund schools for next year. We’re taking time during the joint meeting to talk about this. I find this very disturbing and I object to this type of training during this meeting.” 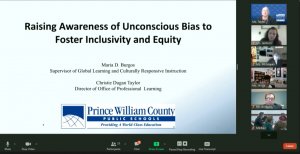 Prince William School Board and Board of County Supervisors watch an a presentation on Unconscious Bias.

Occoquan School Board member Lillie Jessie clarified it is not intended to train them, but for everyone to watch to their benefit as leaders. She said she read over the presentation that day and learned a lot.

After leaving with Lawson and Vega, Candland created a Facebook video, explaining in real time, their objections to the presentation, and posted it on his supervisor's Facebook page.

Candland framed it as a matter of prioritizing the response to the pandemic.

“During this critical time of the global pandemic, kids having issues at home, concerns about funding our schools moving forward, they decided to take this time to talk about Implicit Bias Critical Race Theory,” said the Gainesville Supervisor. “I think it’s highly objectionable, we should be using this time to talk about the issues facing the kids in Prince William County and I think it’s an absolute disgrace that the school board took time and resources.”

Candland also asked if the taxpayers pay for these kinds of programs.

Vega agreed. “I felt that it was important to walk out and not just sit there, because I refuse to legitimize this notion that we are all somehow racist. We live in a great county. This is a difficult time for everyone, and I wholeheartedly agree this is not the time nor the place to be having this discussion. We should be using this time- both board- to work together and really tackle the issues.”

She said they received the agenda just before their own 2 o’clock meeting and they did not have time to read through the presentation.

Jeanine Lawson said she walked out of “a room full of a bunch of tension and fireworks.”

She mentioned Williams, along with Jessie and previous school board chair, Ryan Sawyers, went to the President’ Obama’s Department of Justice claiming a racial inequality issue, regarding the building of Gainesville High School, when she and Candland offered additional funding and matched it with funds to eastern end schools.

Following posting the video on his Supervisor Facebook page, Candland received accolades from those who follow him. The majority of comments were positive, though some questions what he found offensive about learning about Implicit Bias.

Later, after learning that PWCS was presenting Implicit Bias training to its staff, Candland started an online petition: “Say No to Critical Race Theory and Unconscious Bias in Our Schools.” Currently, it is the teachers and staff, not the students who are learning implicit bias.

Rallying against Unconscious Bias training is a popular conservative cause of late. In September, President Donald Trump told the Office of Management and Budget to stop similar trainings within federal agencies, calling them “divisive, anti-American propaganda.”

As word spread of the walkout it became a hot button polarizing and issue. Prince William County residents shared on social media that they deeply troubled by the walkout, and would like the their representatives to understand and address diversity.

“Biases aren’t specifically about race. They cover how you perceive the world- negatively or positively,” Williams said. She thinks it is the approximate time during a pandemic, and while racial tensions are rising.

Williams said that Prince William County is a minority-majority county and school board tries to look through a lens of equity, which is the reason the school board created an Equity Committee and Gov. Ralph Northam has hired an Equity Officer.

“Being culturally responsive- to me- that’s at the foundation and heart of the decision making," said Williams. "Making decisions for people who are like you, and for people who are not like you. I can’t see being an elected official and not thinking it is important to think about everyone in these times.”

Williams said she is not angry at anyone’s response to the presentation.

“I don’t take their responses personally. I feel like it is a reflection of their character not of mine. I’m a little disappointed by their behavior publicly, but people are allowed to feel their feelings. I’m in no position to tell them how they should feel, because that is their right.”

Williams said the presentation went forward, and it was an excellent presentation. She invites people to view it. She also said that in general she beieves the two boards have shown they can work well together.

In a grotesque representation of privilege, Pete Candland sent an open letter to all constituents demanding accountability for tax dollars spent by the BOCS/School Board on “hyper-progressive” issues such as race and diversity. Recognizing that PWC is a majority minority county, creating a more inclusive community by addressing the need to acknowledge implicit and unconscious racial bias is imperative to work on; along with traffic gridlock, quality of education for our children, and public safety. Educating ourselves, staff, and community on the negative impact implicit and unconscious racial bias creates should be a bipartisan issue. Openly writing a letter to the community refusing to educate yourself or allocate tax dollars to racial injustice is a direct side effect of white privilege.

Hansford went on to explain how studies have shown that everyone forms implicit biases through childhood.