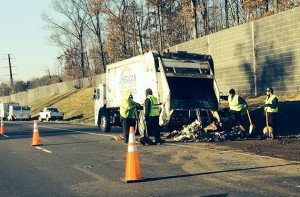 The load on a American Disposal Services garbage truck caught fire and shut down a lane of traffic for four hours on Prince William Parkway at Clover Hill Road Friday afternoon.

According to Prince William County Department of Fire & Rescue Communications Specialist Kim Y. Hylander, at 11:37 a.m. emergency crews took the load off the truck and extinguished the fire.

American Disposal Services of Manassas did not release the definitive cause of the fire, but suggests the improper disposal of flammable items was most likely the reason the truck's load caught fire.

Wilkinson suggested that residents take the time to properly dispose of these items to avoid future incidents.