Two Walk Away from Small Plane Crash in Bristow 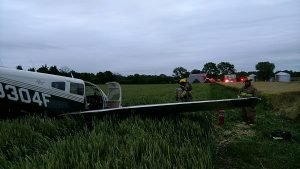 A plane crashed along Bristow Road, Sunday evening, but the two occupants were able to walk away without any serious injuries.

Virginia State Police responded to a crash landing in Prince William County. The incident occurred May 21, 2017, at 8:35 p.m. in a field in the 10,800 block of Bristow Road in Bristow, Virginia.

"A Piper PA-28-181 began experiencing engine problems and made a crash landing in the field," said Virginia State Police Public Relations Director Corinne Geller. "The aircraft struck a wire fence in its landing."

First responders treated the plane’s two occupants for minor injuries at the scene. Debra Lea Varnon Schuldt of Annandale, Virginia, was identified as the pilot.

The plane's passenger was Jeffrey Poindexter of Manassas. According to his wife, Deborah Poindexter, he sustained only minor injuries and is at home recovering.

The FAA and NTSB were notified of the incident. The cause of the crash remains under investigation.

According to Deborah Poindexter, the airplane had been totaled in the crash.