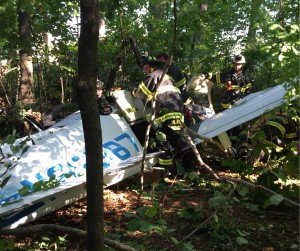 A small plane crashed in Bristow Sunday morning. No one on the ground was hurt. Photo Courtesy of Donald Holman

"The plane was secured and crews extricated the pilot from the plane," a NVFRD official said. "The pilot was then transported to the landing zone that was setup by Stonewall Jackson Volunteer Fire and Rescue at the Harris Teeter parking lot."

In a statement, the Federal Aviation Administration said the plane was a Piper PA-28 aircraft, with only one passenger. The student pilot was practicing approaches at Manassas Regional Airport.

The FAA continues to investigate the incident.

The female pilot of the plane was conscious following the crash in the wooded area behind 9840 Upper Mill Loop. There were no passengers flying with her.

Police blocked off portions of the neighborhood and said there is no danger to residents.

"The biggest consideration is trying to remove the plane," Welsh said.

Many residents were unaware of the incident, but some in Bristow heard the plane prior to the crash.

"My wife's friend called and said is there a plane in your backyard," said David Whritenauer of Bristow.

Virginia State Police were called to the 9400 block of Upper Mill Loop in Bristow at 9:11 a.m. Sunday for a crash landing of a small plane.

"A single-engine plane struck the trees and fell into the backyard of a residence," Virginia State Police spokeswoman Corinne Geller said. "The pilot has been flown [by Aircare One] to a nearby hospital for treatment of serious injuries." 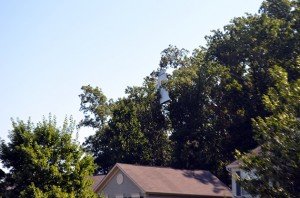 The plane hit the trees by several homes before crashing in the woods. Photo by Stacy Shaw

She said no residents on the ground were injured.

"The plane did not strike any houses," she said.

Bristow Beat will continue to monitor the story.