UPDATED: Small Plane Failed to Land in Manassas Before Crashing into Ocean 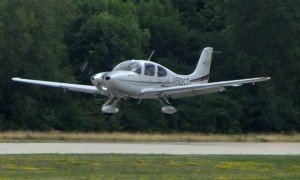 Updated: Aug. 30, 11:45  p.m.
.
The Federal Aviation Administration said the plane was registered to Ronald Hutchinson of Brookfield, Wisconsin.
.
Updated: Aug. 30, 7 p.m.
.
A Coast Guard official confirmed that the Cessna SR20 that crashed approximately 51 miles southeast of Chincoteague Island was scheduled to land at the Manassas Regional Airport.
.
"Watchstanders at the Coast Guard 5th District in Portsmouth received notification at approximately 2:40 p.m. that a single-engine Cessna aircraft with only the pilot aboard failed to land at Manassas Regional Airport as scheduled,"  Petty Officer 3rd Class Nate Littlejohn said in a release.
.
However, the Cessna remained at an altitude of approximately 13,000 feet and continued into restricted air space near Washington, D.C.
.
"Two U.S. NORAD F-16 aircraft came alongside the Cirrus to investigate and observed the pilot to be unconscious in the cockpit,"  Littlejohn said. "The F-16 airmen escorted the Cirrus on its course over the Eastern Shore of Virginia until it crashed into the Atlantic Ocean."
.
An MH-60 Jayhawk helicopter crew and an HC-130 Hercules airplane crew from Air Station Elizabeth City in North Carolina and the crew of Cutter Beluga, stationed in Virginia Beach responded to the crash site.
.
Updated: Aug. 30, 4:14 p.m.
The Coast Guard said the plane has crashed 52 miles east of the Virginia coast. The Coast Guard is responding at the scene; there are reports that there are good samaritans on the scene, spokesperson  Petty Officer 3rd Class Nate Littlejohn, U.S. Coast Guard District 5 said. There is no information about the condition of the pilot at this time. Updated: Aug. 30 3:27 p.m. Officials at the Manassas Regional Airport cannot confirm that the plane was bound for Manassas. Updated: Aug. 30, 3:05 p.m. The plane was reported out over the ocean, heading northeast; the pilot was still unresponsive. Original Story: Fighter Jets from Andrews Air Force Base are reportedly engaging an SR20 aircraft from Wisconsin, which is in distress over the Manassas area 1:55 p.m. Saturday. According to a source, the pilot is unresponsive, perhaps suffering from hypoxia from a loss of oxygen. Residents throughout the area heard the sounds of the jets, some commenting that they sounded extremely close. Bristow Beat will update this story when more information becomes available.