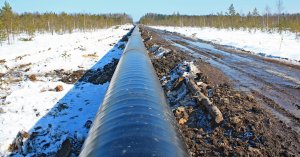 Image courtesy of Food & Water Watch[/caption] Submitted by Food & Water Watch  Richmond, VA - Over the weekend, Virginia Natural Gas (VNG) filed a motion to withdraw its proposal to build the Interconnect Project, which would have built high pressure fracked gas pipelines in Prince William and Fauquier counties as well as a new compressor station in Prince William county. VNG had planned to build the Interconnect in Northern Virginia primarily based off of plans from a previously cancelled project called the Header Improvement Project (HIP). HIP was meant to service the controversial C4GT gas plant in Charles City County, which came under heavy criticism from activists for its reckless permit avoidance. Ultimately, VNG was unable to prove that C4GT had secured adequate financing, and HIP was cancelled. In this weekend’s motion to withdraw, VNG cited that the buyer’s need had changed, rendering the Interconnect Project “no longer needed as proposed.” This is the second Virginia pipeline this month to face an uphill battle to viability, in the face of extensive grassroots opposition and shifting financial incentives. To complete the withdrawal process, the State Corporation Commission will need to formally accept VNG’s motion to withdraw. “The Interconnect Project was Virginia Natural Gas’ attempt to shoehorn part of the already failed Header Improvement Project into a new dirty fracked gas proposal,” said Food & Water Watch Virginia Organizer Jolene Mafnas. “We have been fighting this dangerous and unnecessary proposal for months. If approved, Interconnect would have emitted toxic pollutants and cut through Prince William’s Rural Crescent — we are hopeful this will be the end of this terrible plan. As we celebrate this victory, we double down on our work to ensure that state agencies investigate other dirty fossil fuel projects like C4GT’s problematic permit avoidance.” “We’re so happy to see them withdraw,” said Faith Alliance for Climate Solutions Prince William County Hub Community Organizer Sashia Scott. “As a faith based-organization, this project would have violated the moral responsibility we encourage: good stewardship over the earth and those that inhabit it.” "We are celebrating yet another failed fracked gas project that was doomed before even starting,” said Mothers Out Front Northern Virginia Community Organizer Tiziana Bottino. “The families that would have been affected are breathing a huge sigh of relief knowing this unnecessary project will not threaten them any longer, but we are left to wonder how many more failed fossil fuel proposals it will take before those companies realize a just clean energy transition is not only economically feasible, but necessary." "This is exciting news for Prince William residents and Virginians across the state fighting fossil fuel developments,” said Chesapeake Climate Action Network Northern Virginia Organizer Zander Pellegrino. “This decision proves what we already know to be true: that organizing works and that new fossil fuel projects do not make sense. In order to keep our communities safe and ecosystems healthy, we need to end fossil fuel development and fund a just transition in Virginia.” Prince William's Brentsville Supervisor Jeanine Lawson told Bristow Beat she is happy with the withdrawal of this project.

"When I was notified that the VNG expansion and compression station project had withdrawn, I was relieved because this application had raised significant fears in the rural area," said Lawson. "Now we can all focus on the latest threat of data centers in the rural area."