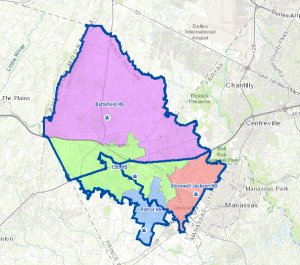 Due to the inequity of population demographics in Plan 1, some attendees likened the boundaries to "segregation."

The county's 13th high school is scheduled to open in September of 2021. It is located near Jiffy Lube Live in Bristow.

A significant number of residents attending the boundary meeting thought the plan would most negatively affect Stonewall Jackson as school would see a percentile increase in minority, low-income and LEP students. Others had concerns as to how their neighborhoods had been zoned.

Led by Matt Cartlidge, Supervisor of Planning for Prince William County Schools, this was the second community input meeting regarding the 13th High School. The first, held at Battlefield High School in Haymarket, was a scoping meeting before the map was drawn. There will be one more input meeting, May 16 at 7 p.m., at Patriot High School auditorium.

A public hearing and school board vote will be held June 19 at the Kelly Center after 7 p.m. Community members are invited to submit feedback and/or sign up to speak at the public hearing.

Feedback can be submitted here.

Cartlidge explained that boundary plans, governed by policy, had to consider the following, in order of importance: proximity, keeping neighborhoods together, progressing students together, and not repeatedly redistricting communities. After that, demographics were a consideration.

Read the Boundary Porthole to find where your residence falls within the new boundaries: “How This Will Affect You.” You can also submit comments to the Planning Department, and learn more about the 13th High School.

Based upon Plan 1, Stonewall Jackson High School would lose some of their more affluent neighborhoods from the Bristow/Linton Hall area.

It is the same story with the L.E.P. populations. At Stonewall, the population increases from 18% to 24%. At Patriot there will be just 1.7% LEP students; 1% at Battlefield and an estimated 4% at the new high school.

The economically disadvantaged population would increase to 61% at Stonewall Jackson from 50%. It would stay relatively the same at Patriot at 11.6 %, decrease at Battlefield to 5%. Some of that population would be shifted to the 13th High School, which would have 18.7%.

People were upset about the inequity in those numbers. Some residents went as far as to say the new boundaries purposefully discrimination by race and economic inequality to benefit the community's most affluent to the detriment of those less fortunate.

“Education is more important than taking 10 minutes to get to school,” said one Stonewall Jackson student.

“The worst part is what you did to our students,” said Bristow resident Tracy Conroy, candidate for school board chairman in 2015. “You socially engineered a school with an absolute lack of diversity...Stop bragging about the schools who are doing so well...We are only doing as well as our lowest-performing schools...Some kids are living out of their cars...You have once again let everyone down.”

SJHS Senior Class President Lubna Azni said there is a petition circling around the school against the disparate boundary plan. She called it “economic stratification” and said that SJHS is a beautiful “melting pot of cultures” but all Prince William County students should experience diversity.

Cartlidge asked attendees if they would prefer boundaries that prioritized demographics even over proximity to schools. Over half of the audience raised its hands. Cartlidge said he would produce one for instructional purposes, so they could see how “crazy” it would look.

Someone said the Department of Justice should look at the boundaries. Residents of various races and neighborhood advocated for inclusion and diversity and wanted demographics to be more of a consideration, though not the only consideration.

Cartlidge emphasized that it was the first draft, but it was also unlikely that demographic balance would take priority over proximity. He said balancing different needs is always "challenging."

On the whole communities of Bristow, Haymarket and Gainesville seemed happy with the boundaries except for three communities.

Residents of Parks of Piedmont “South” along Old Carolina Road wanted to stay within the Battlefield district rather than be placed in the 13th High School. The community is located just two minutes away from Battlefield, and the gated section of Parks of Piedmont has not been reassigned. As they are more diverse than some other Greater Haymarket communities, they said it would benefit Battlefield, and since the school would be below capacity at 89% in 2028 when other schools are over capacity, there is room for them.

Chris Yung Elementary School district families located north of Linton Hall Road in Bristow, some along Devlin Road, are currently zoned for Stonewall Jackson High School. They said appreciate being rezoned to Patriot or the 13th High School, which are closer than Stonewall, but asked that the community remain together. In Plan 1, the community is split.

Glenkirk Estate families in Gainesville also saw their community being separated between Patriot and the 13th High School, as the community is separated by Rollins Ford Road. They asked that it be kept together.

Many Victory Lakes residents spoke passionately, asking that their community be included in the Patriot boundaries as proposed in Plan 1. VL residents previously asked they be included at Patriot to be closer to home and progress with classmates. One resident said that bringing them to Patriot “makes complete sense.”

Parents said being separated from friends is very difficult for 9th-grade students because it is a vulnerable time in their lives and they are already trepidatious about starting a new school.

Some parents, students, and graduates disagreed, saying Stonewall Jackson is an amazing school and it would be a disservice for Victory Lakes to be reassigned. And some speakers said it is valuable for students to make new friends, and they can still remain close with neighborhood friends.

Both School Board Chairman Babur Lateef and Brentsville School Board Representative Gil Trenum said it is very unlikely that the first draft boundary proposal will be approved as is. They predict it will undergo some revisions.

They noted that schools receive additional funds for every low-income student to make up for some of the disparity.

Trenum said they have made some improvements at SJHS such as better secured classroom doors and the new turf fields, but they will continue looking into ways to improve the experience for students there. The school board also has a join infrastructure task force with the county supervisors, which looks at how to improve older schools.

He said he really appreciates that the school division is now holding the meetings at various schools so to receive more input of various perspectives from different communities.

Lateef said that his concern for older schools is the reason he is asking the board of county supervisors for $125-150 million to renovate the counties oldest schools: Stonewall Jackson, Osbourn Park, Brentsville, Woodbridge and Gar-field. He said it would be difficult for the school to borrow any more CIP funds.

Del. Danica Roem (D-13th District) was in attendance. She said this will be a school board decision but she wanted to stay abreast of what is happening as most of the 13th High School is in her district. She pointed out some small changes on the edges of the boundaries that could make the districts more equitable.

She said she held a student town hall at SJHS and heard many of the same concerns. "Not everyone feels they are being heard."