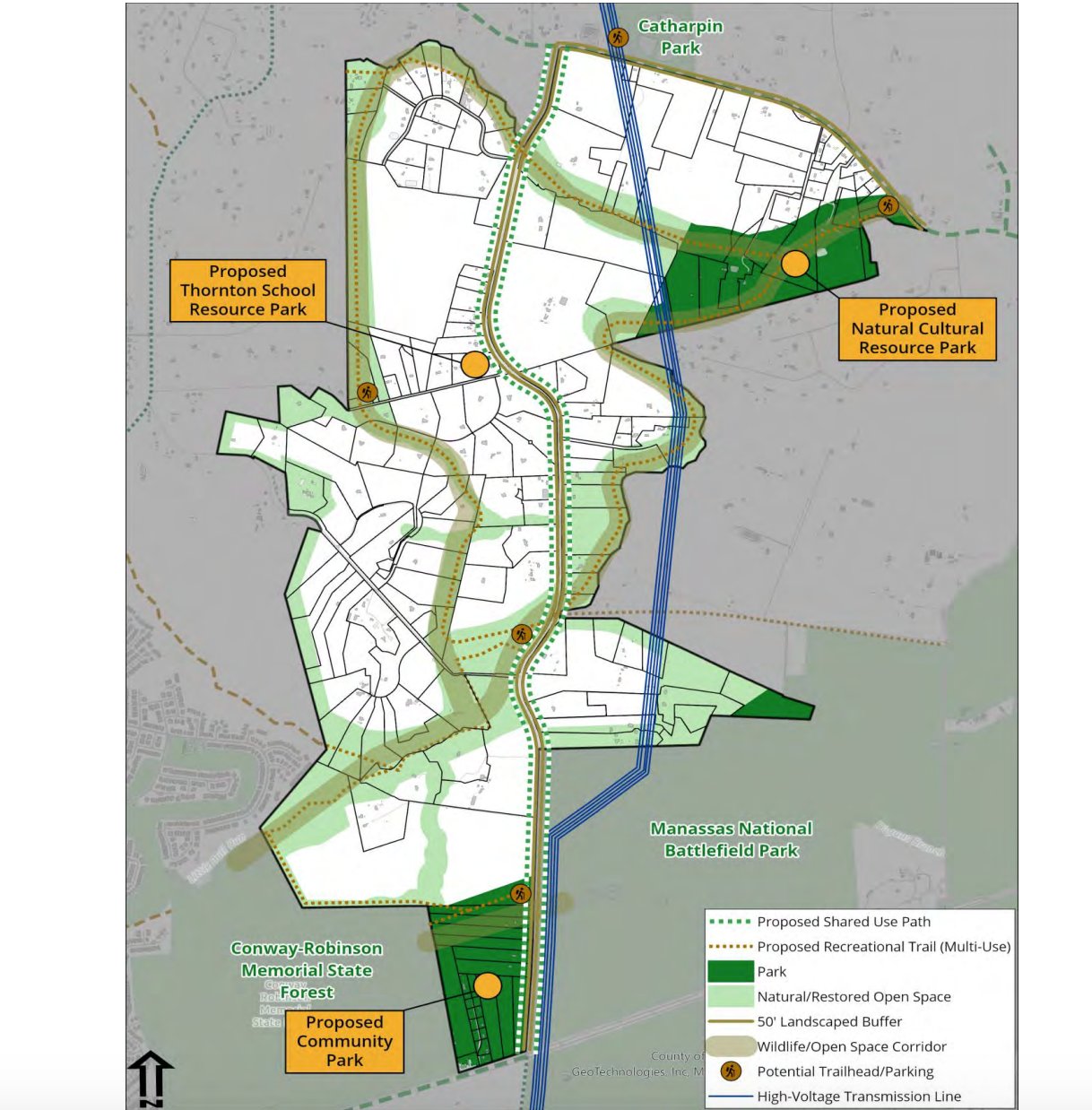 Two Northern Virginia Lawmakers announced Monday that they have brought forth legislation that would either block data centers being built near the Manassas Battlefield or at the least make them adhere to stringent regulations.

Senator Chap Petersen-D, 34th Va District, Senate Bill (SB) No. 1078 would prohibit the siting of any data center within 1 mile of a national park and other historically significant areas.

The bill aims at preventing the construction of the Prince William Digital Gateway planned for 2,100 acres along Pageland Lane in Gainesville. Those data centers, estimated to house 90 buildings, would abut the Manassas National Battlefield and Conway Robinson Forest State Park.

In November, the Prince William Board of County Supervisors voted 5-2 to add the PW Digital Gateway to the county’s comprehensive plan after a 14-hour public hearing in which they heard from hundreds of citizens opposing the gateway. Supervisors reaffirmed their decision in December when they adopted a revised comp plan.

While the comp plan paves the way for data centers, the land has yet to be rezoned. This creates an opening for state legislation to intervene.

According to Petersen's proposed HB 1078, Virginia data centers shall only be sited “in approved areas,” where they will have “a minimal impact on historic, agricultural, and cultural resources and (ii) will not be within one mile of a national park or state park or other historically significant site, as designated by the Department of Historic Resources.”

Petersen, who purports to be a defender of rural areas, said he is pro-business but believes Virginia lawmakers ought to consider the long-term consequences of their decisions. His concerns included effects on water quality, new high voltage power lines, noise pollution, and spoiling the viewshed. He also said he believes the data centers are tied to cryptocurrency, an unstable commodity.

Petersen drafted another bill last week, JB 240. that would require Virginia to present an analytical report on data centers as Virginia continues to provide them tax incentives.

Del. Danica Roem-D of Virginia’s 13th District signed on as a co-patron on those two bills and introduced two herself. Roem, who represents some Gainesville District residents, said her bills would place the strictest restrictions on the data center industry should Petersen’s bills fail to pass.

She believes tight restrictions are the appropriate response as Northern Virginia has the highest concentration of data centers in the world. Presently Prince William is on track to house more data centers than Loudoun, making it the world's data center capital. Both lawmakers said it would be prudent for Virginia to hit the pause button on greenlighting data centers outside industrial areas until some pertinent questions are answered.

Her other bill, HB 1974, would require data center developers to bury power lines of 69 kilovolts or greater that are located within one mile of a national battlefield or state park. Roem said she remembers the fight against tall high-voltage power lines in the area in 2006 and again in 2014.

She said Prince William data centers should be sited in the industrial Innovation Park and kept out of Bristow and Nokesville as well. In Bristow, data centers are planned near homes and schools despite community opposition.

In opposing data centers, Roem breaks with Democrats on the Prince William Board of Supervisors who have touted data centers as a means to bring hundreds of millions of dollars annually to the county. Loudoun expects to receive $500 million from data centers this year, but they received millions less than expected last year. As computer equipment depreciates it yields less tax revenue.

Throughout the controversial process, Roem has sided with her Gainesville District constituents who were opposed to the project. They received no direct representation on the county board during votes relating to the digital gateway. Gainesville Supervisor Pete Candland-R recused himself after he entered into a contract to sell his land along Pageland. However, He only resigned after the comp plan was approved.

Candidates for Gainesville Supervisor Bob Weir-R and Kerensa Sumer-D both object to data centers near the national battlefield.

This article is protected by Copyright law and is illegal to copy and/or disseminate it without permission whether via email, social media, a repost on a website or in print. Copying the article is not protected simply by providing the author's name and a link back to BristowBeat.com and/or the article. Bristow Beat encourages readers to share our articles by providing a short excerpt (no more than one paragraph) or summary of the article, and including a link directly back to the article being shared.  Sharing our articles in the appropriate and legal manner supports Bristow Beat and our local sponsors.