‘A Good Night for Incumbents’ in Virginia Midterm Elections 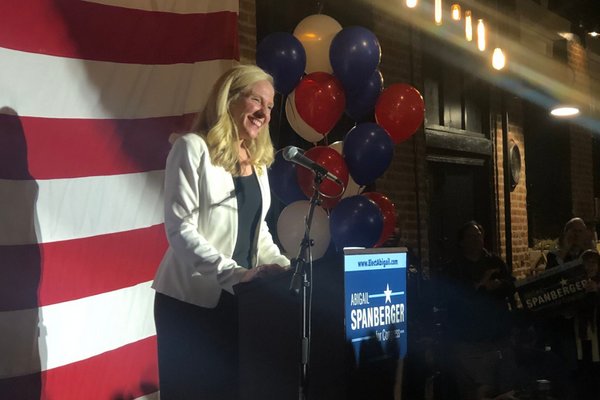 RICHMOND, Va. -- All but one incumbent across Virginia’s 11 congressional districts will return to the U.S. House of Representatives after races were called in Tuesday’s midterm elections.

Republicans picked up one seat and now hold five seats in the U.S. House compared to the six seats Democrats hold. All races have been declared by multiple news outlets, although election officials are still counting some remaining absentee and provisional ballots.

“It seems to me overall in Virginia and around the country, this was a good night for incumbents from both parties,” said Stephen Farnsworth, director of the University of Mary Washington Center for Leadership and Media Studies and a political science professor.

Republican candidates pushed messaging around the economy and inflation, while Democratic candidates focused on abortion access and reproductive rights, and threats to democracy, Farnsworth said.

“I came out today because of the state of our country,” said Larry Jett, a Spotsylvania County voter at Massaponax High School in District 7. “I’m hurting. I know others are hurting, as well. Something’s gotta change.”

Nearly 3 million votes were counted as of midday Nov. 9, based on data from the Virginia Department of Elections. A few precincts have yet to report results from early voting, provisional ballots and absentee ballots. Early voting turnout neared the 1 million mark.

The preliminary voter turnout this year was approximately 49%, down over 10 percentage points from the previous midterm elections in 2018. Turnout was historic that year and seen as voters reacting to former President Donald Trump. The last time there were only U.S. House seats on the ballot during Virginia midterm elections was 2010, when turnout was 44%.

The state had initial problems ahead of Election Day with backlogged voter registration forms and some voters received incorrect information about which polling place to cast their ballots.

“Virginia generally does pretty well in the process of elections,” Farnsworth said, “but there are signs that there’s significant room for improvement when it comes to these issues of election mechanics.”

Several voters surveyed by 15 Capital News Service reporters at precincts throughout Central Virginia said they hit the polls as a part of their civic duty.

“Voting is kind of the foundation of our democracy,” said Brian Miller, a Chesterfield County voter at Ecoff Elementary School in District 4. “If we don’t have that, what else have we got?”

Bernice White emphasized the importance of casting a ballot after she voted Tuesday for her 4th District congressional candidate at Transformation Church in Chesterfield.

“There are things that affect our community that if we don’t get out and vote, we don’t make the change and it’s not enough to talk about it,” White said. “You got to be about it.

Congressional candidates raised and spent tens of millions of dollars to campaign in tightly contested races this year, according to campaign finance reports on the Virginia Public Access Project, or VPAP. Spanberger spent $7.8 million this year, with her opponent spending almost $2.7 million. Approximately $9 million total was spent this year in the District 2 race between Luria and Kiggans.

“We are looking at so much money being spent in these elections,” Farnsworth said. “It’s really amazing when you compare the numbers of 2022, to say, the midterm elections of 2018.”

Luria spent almost three times the money as Kiggans, but was unable to snag a victory in the hotly-contested race.

“For those who didn’t vote for me, I look forward to representing you in Congress,” said Kiggans during her Election Day victory speech.

Kiggans currently represents Virginia Beach and Norfolk cities as a state senator. A special election to fill the one year remaining in Kiggans’ term will likely occur before the 2023 General Assembly convenes on Jan. 11, according to VPAP.

Her experience as a lawmaker “who offered up a vision of the Republican party that was not 100% the Donald Trump election denial narrative” helped her win the seat, Farnsworth said. The district shifted four points more Republican as a result of recent redistricting, which Farnsworth said also contributed to her victory.

The race between Democrat incumbent Jennifer Wexton and Republican challenger Hung Cao in District 10 was also closely watched. Wexton won by almost 6 percentage points, or almost 17,000 votes. The three main competitive elections were key markers for where the country may be headed in this election and beyond, Farnsworth said. The “real contests” in American politics, he said, are in the suburbs, which were represented in those three districts.

Suburban voters in districts across the country “are going to determine how much progress President Biden can make in the next two years, or whether he’s going to be battling with Republicans,” Farnsworth said. “Basically if the Republicans end up controlling the House, the legislative capacity of the Biden Administration shrinks to basically zero.”

Seats for both the U.S. House and Senate were up for grabs across the country in this election. Republican candidates outnumber Democrats in the House and are currently tied in the Senate, according to the latest results from the New York Times.

All 140 seats in the Virginia General Assembly will be on the ballot in the upcoming 2023 election.

Capital News Service is a program of Virginia Commonwealth University's Robertson School of Media and Culture. Students in the program provide state government coverage for a variety of media outlets in Virginia.