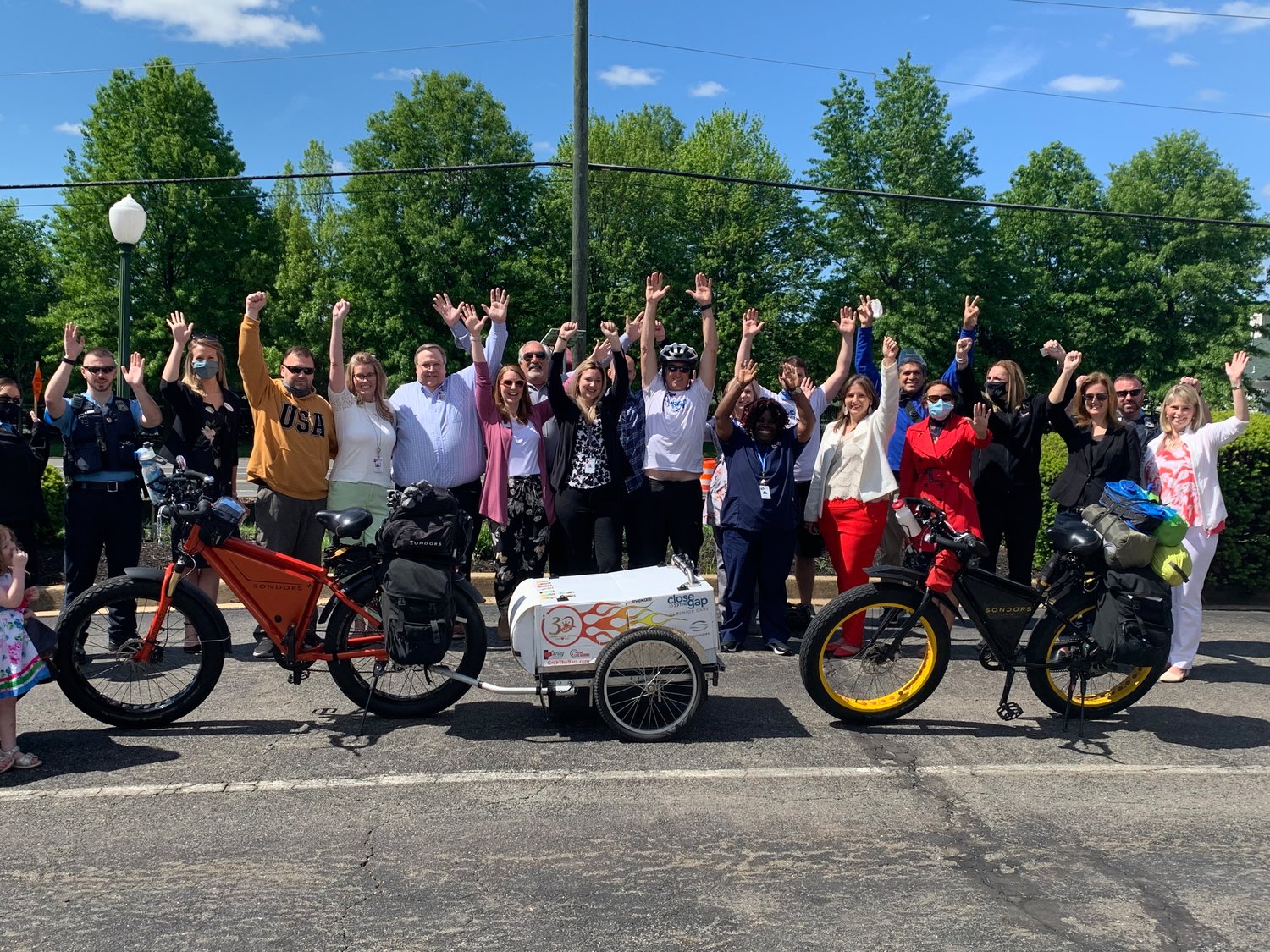 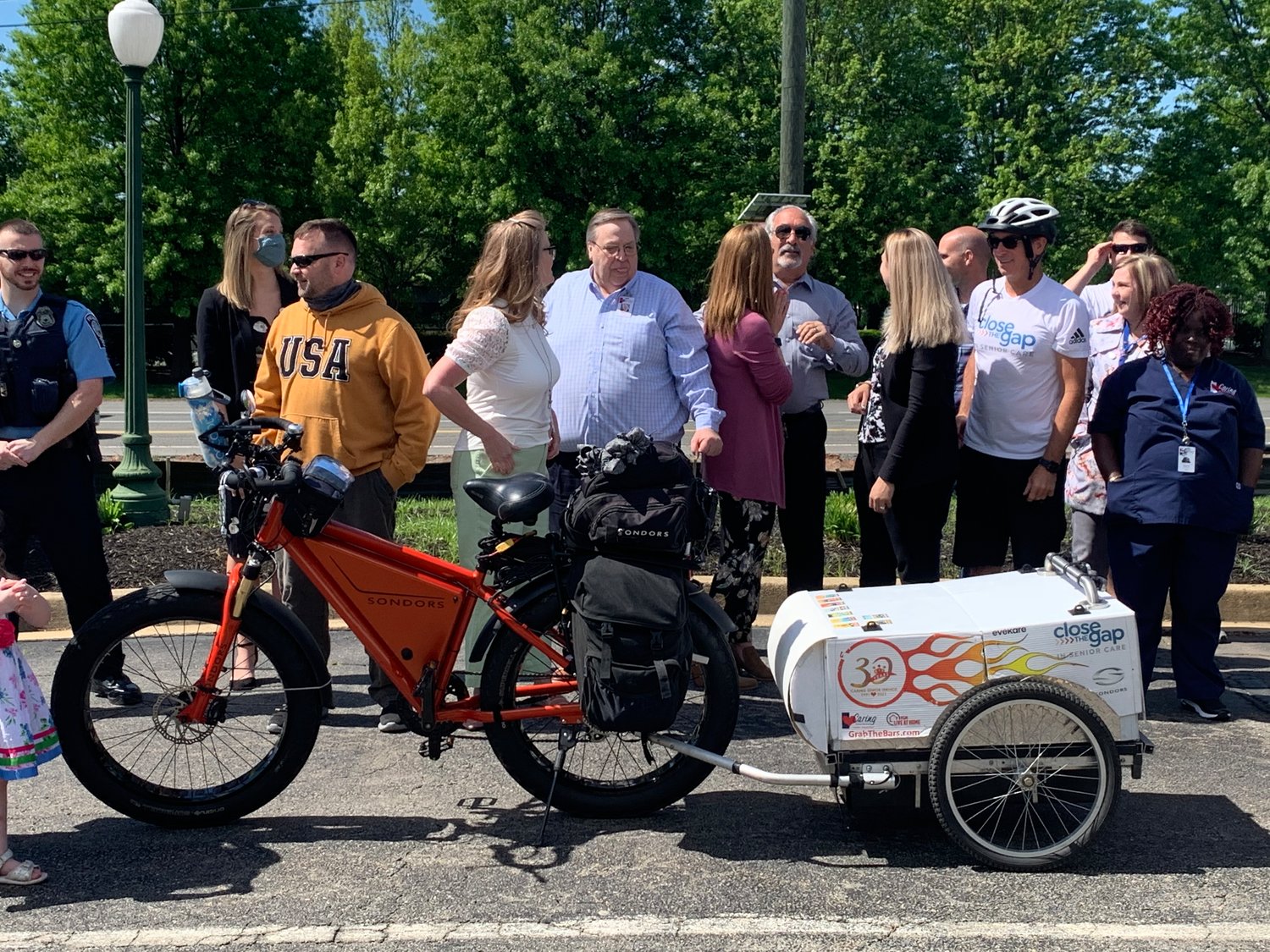 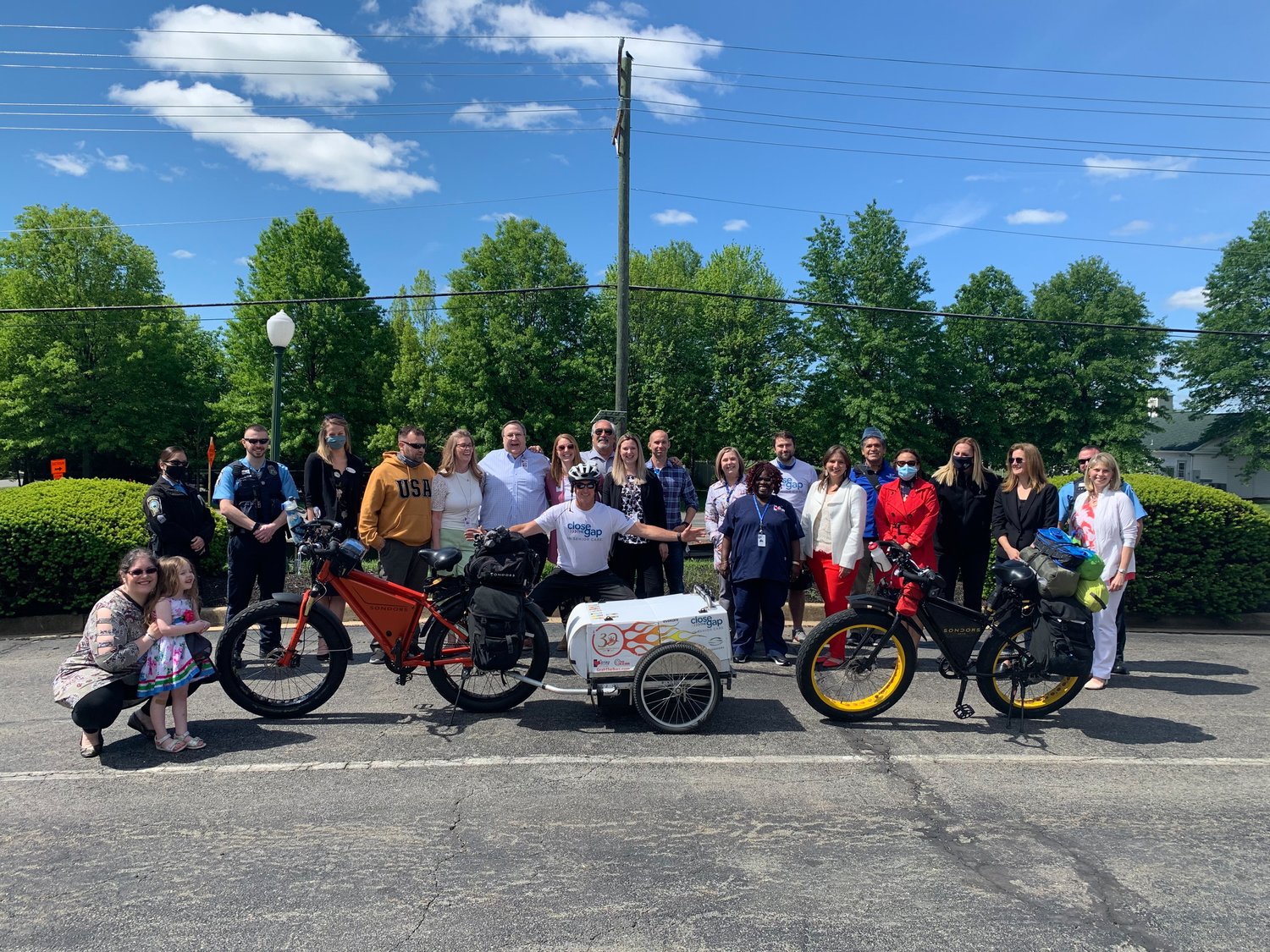 Caring Senior Service friends stand with Jeff and his e-bikes in Gainesville. 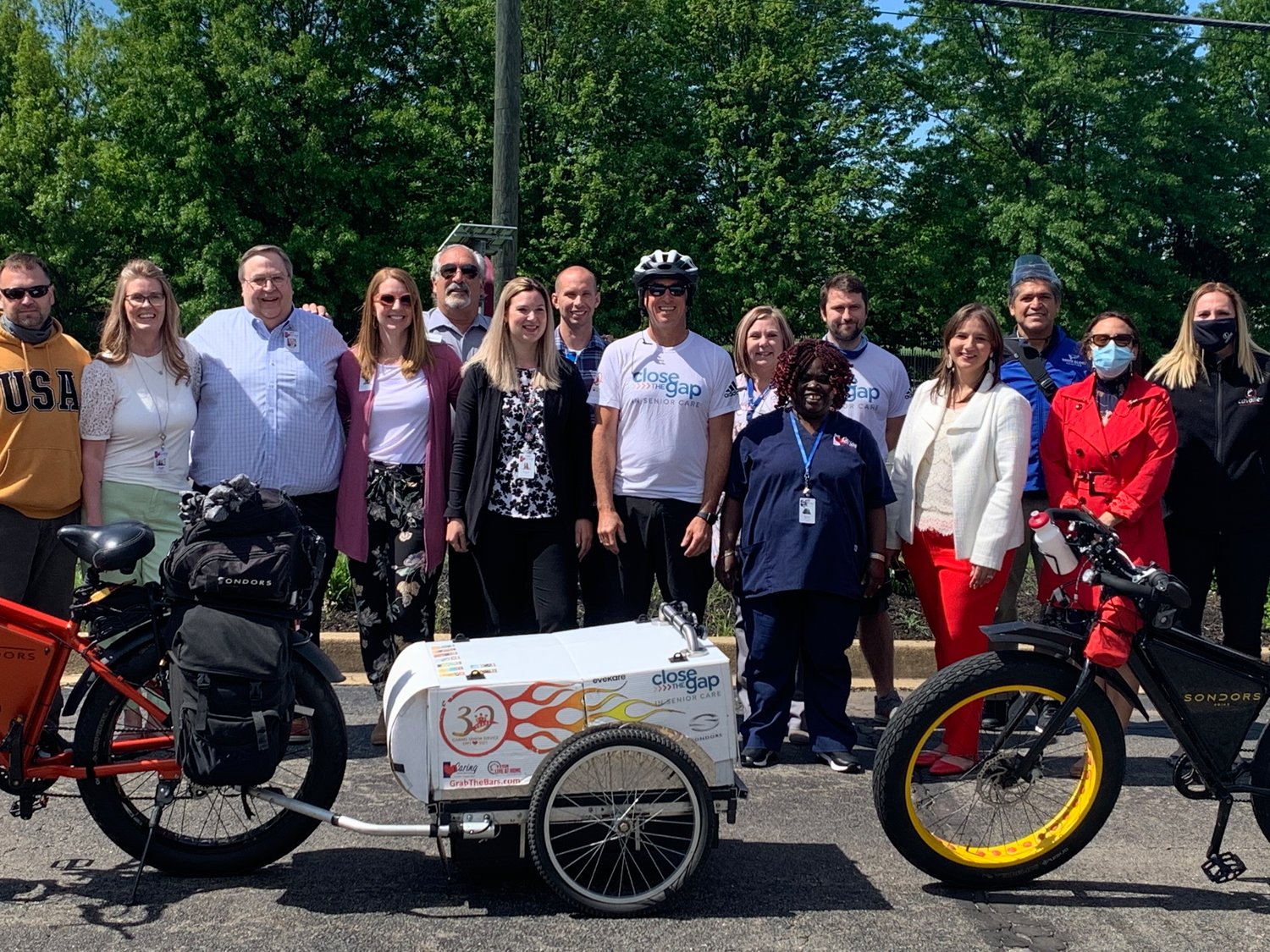 Jeff is traveling 9,000 miles this spring and summer via e-bike. 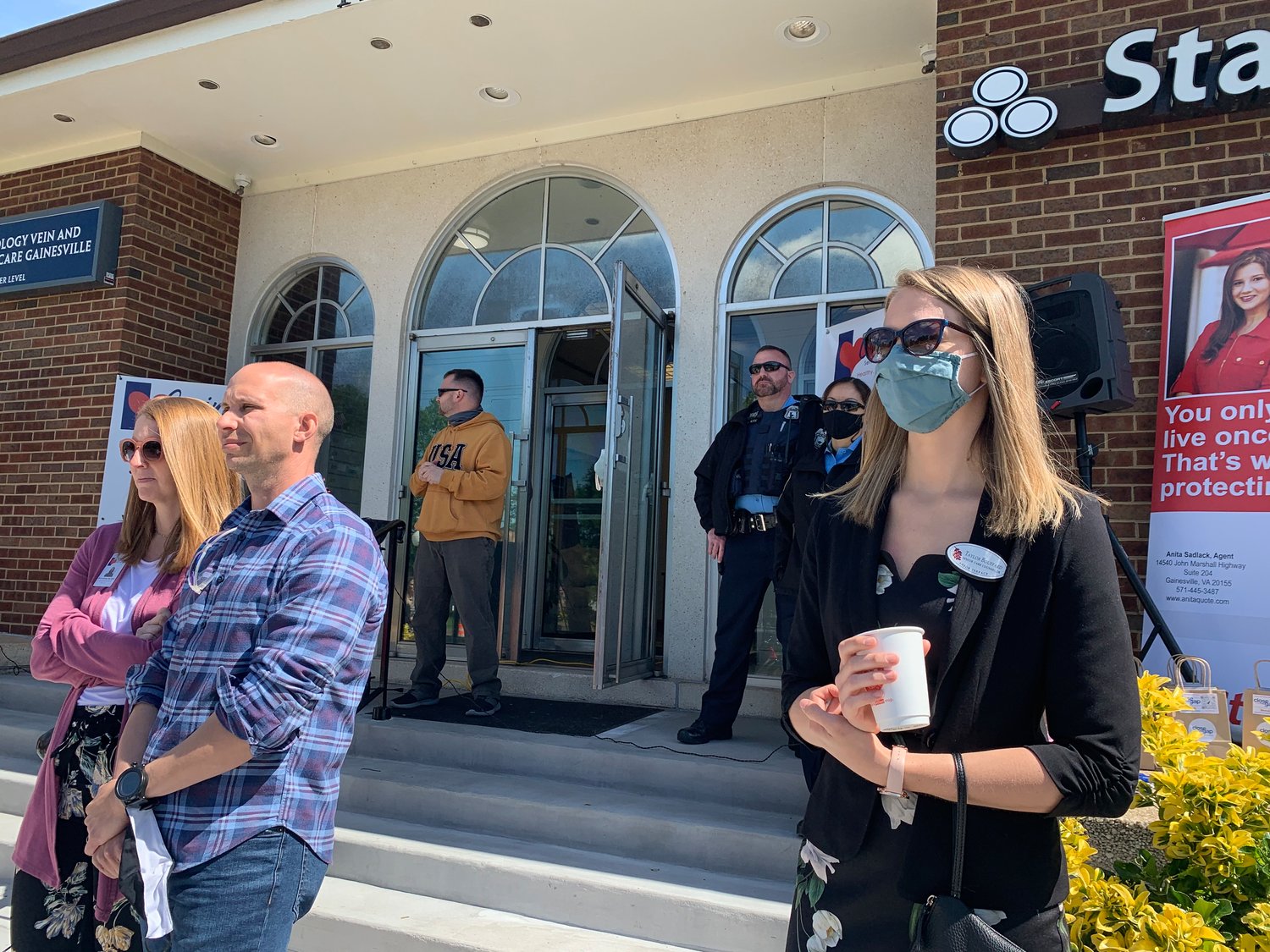 Friends and employees of Caring Senior Service of Northern Virginia watch a presentation by Jeff Salter, the company's founder. 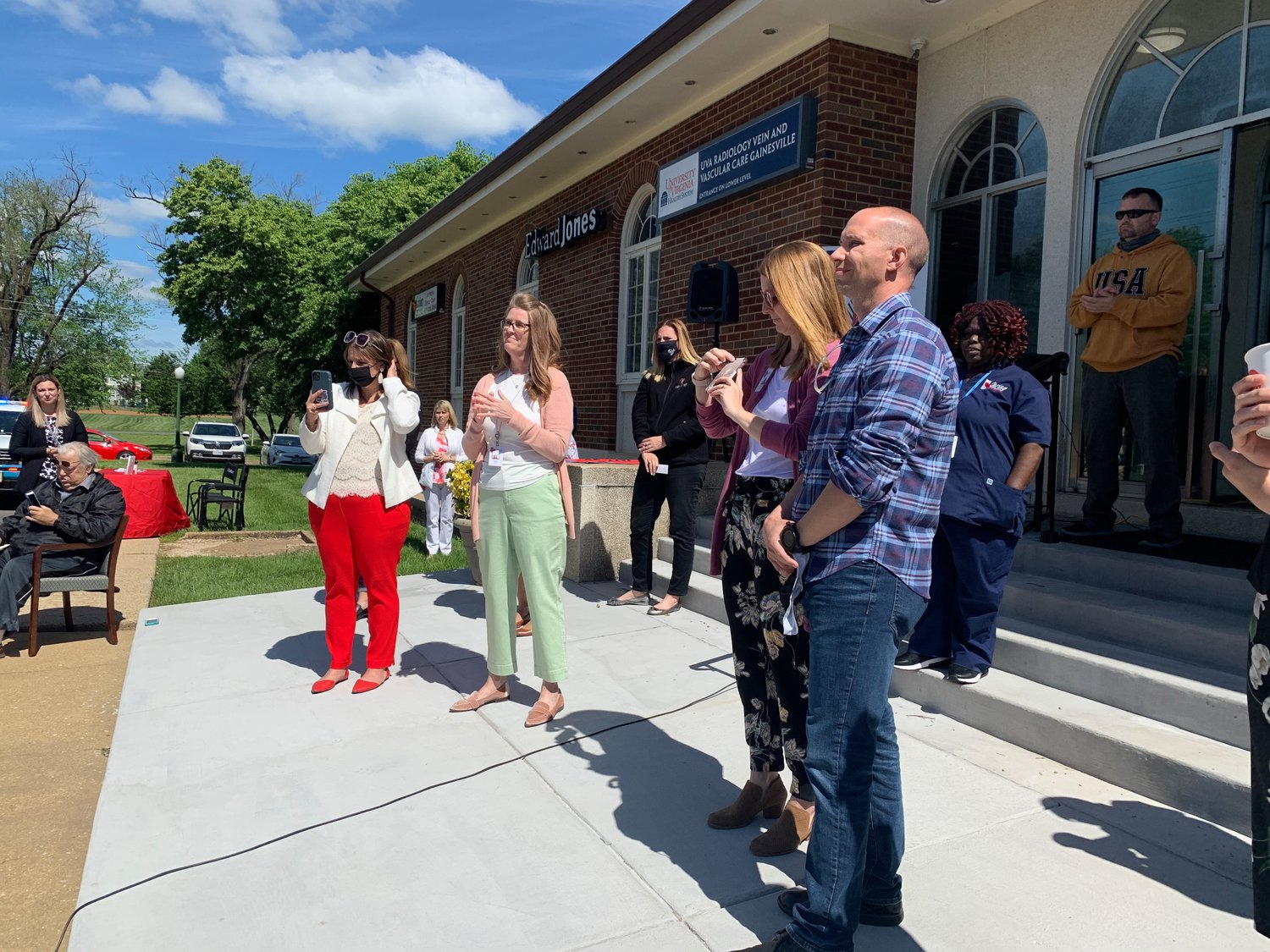 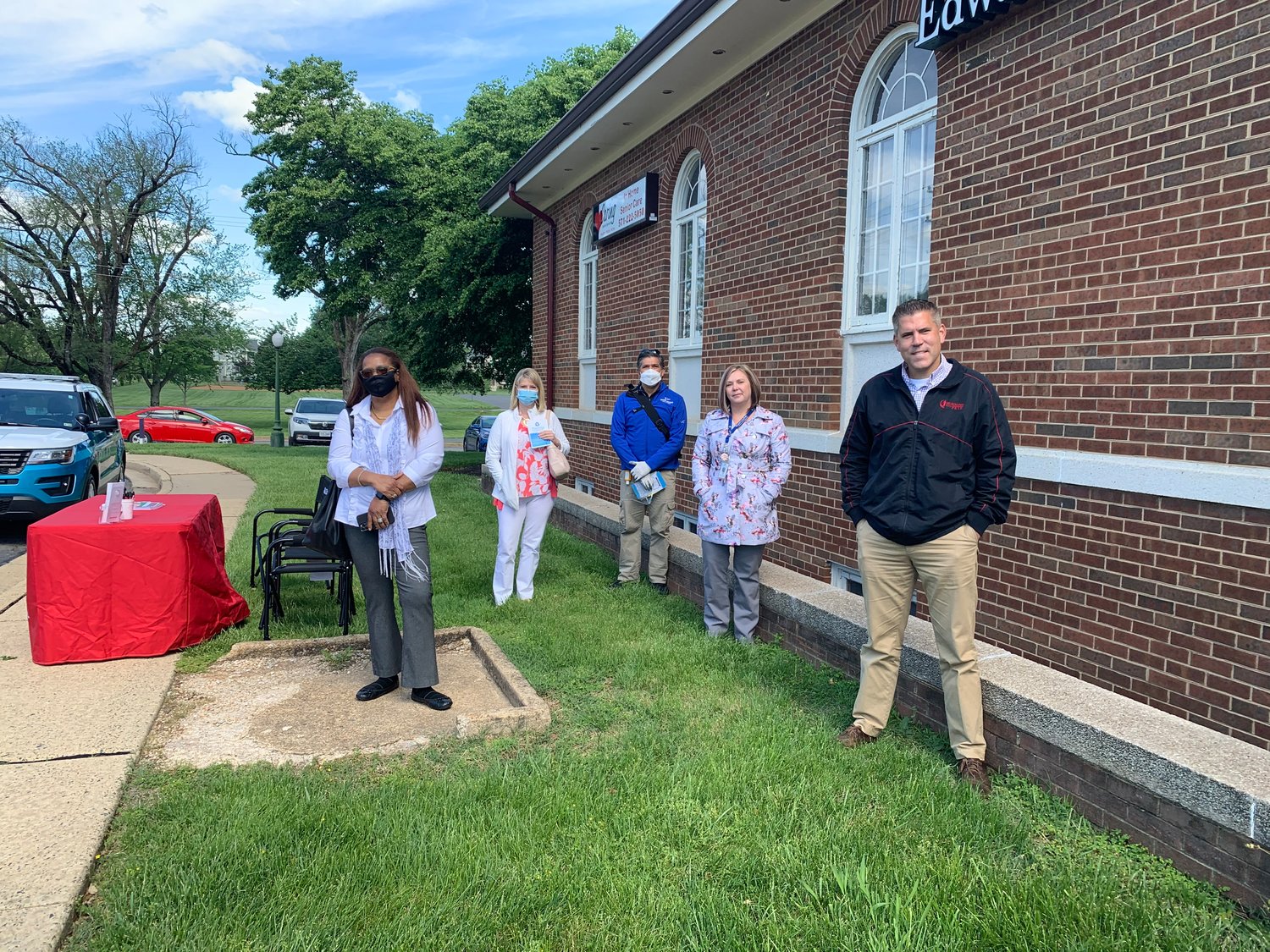 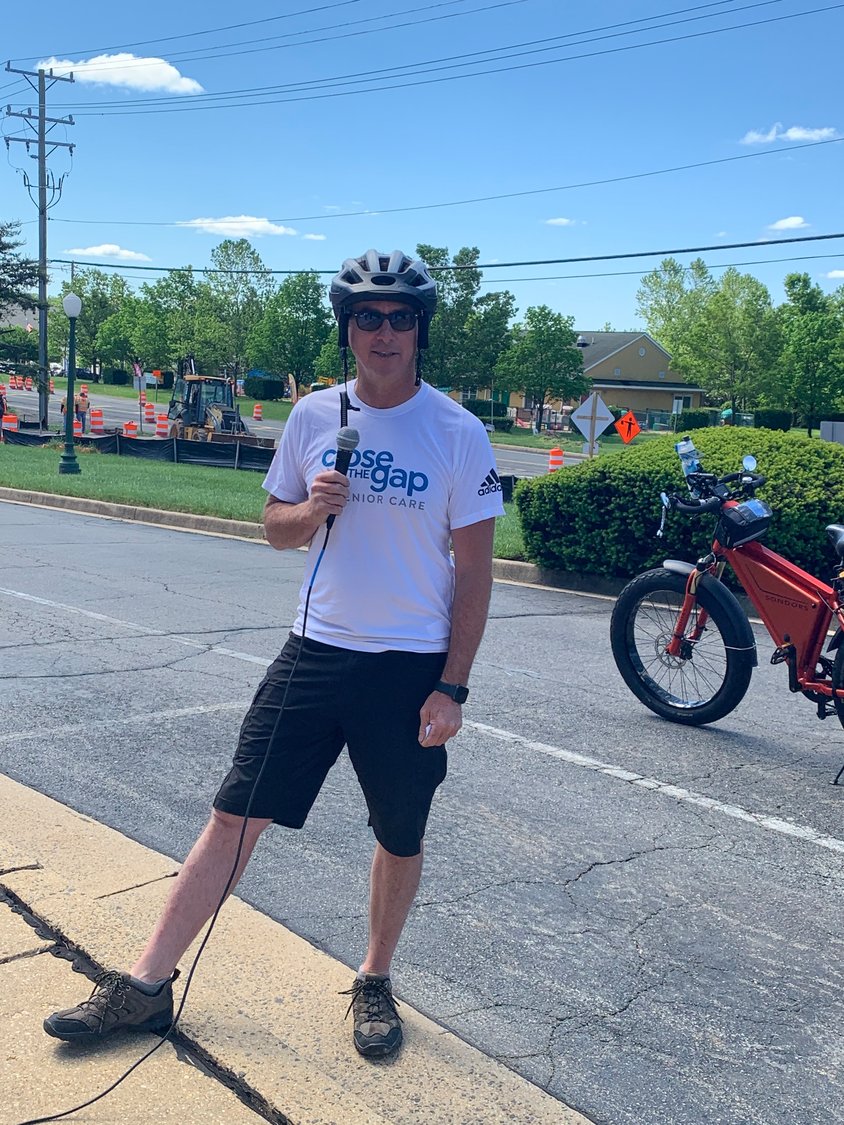 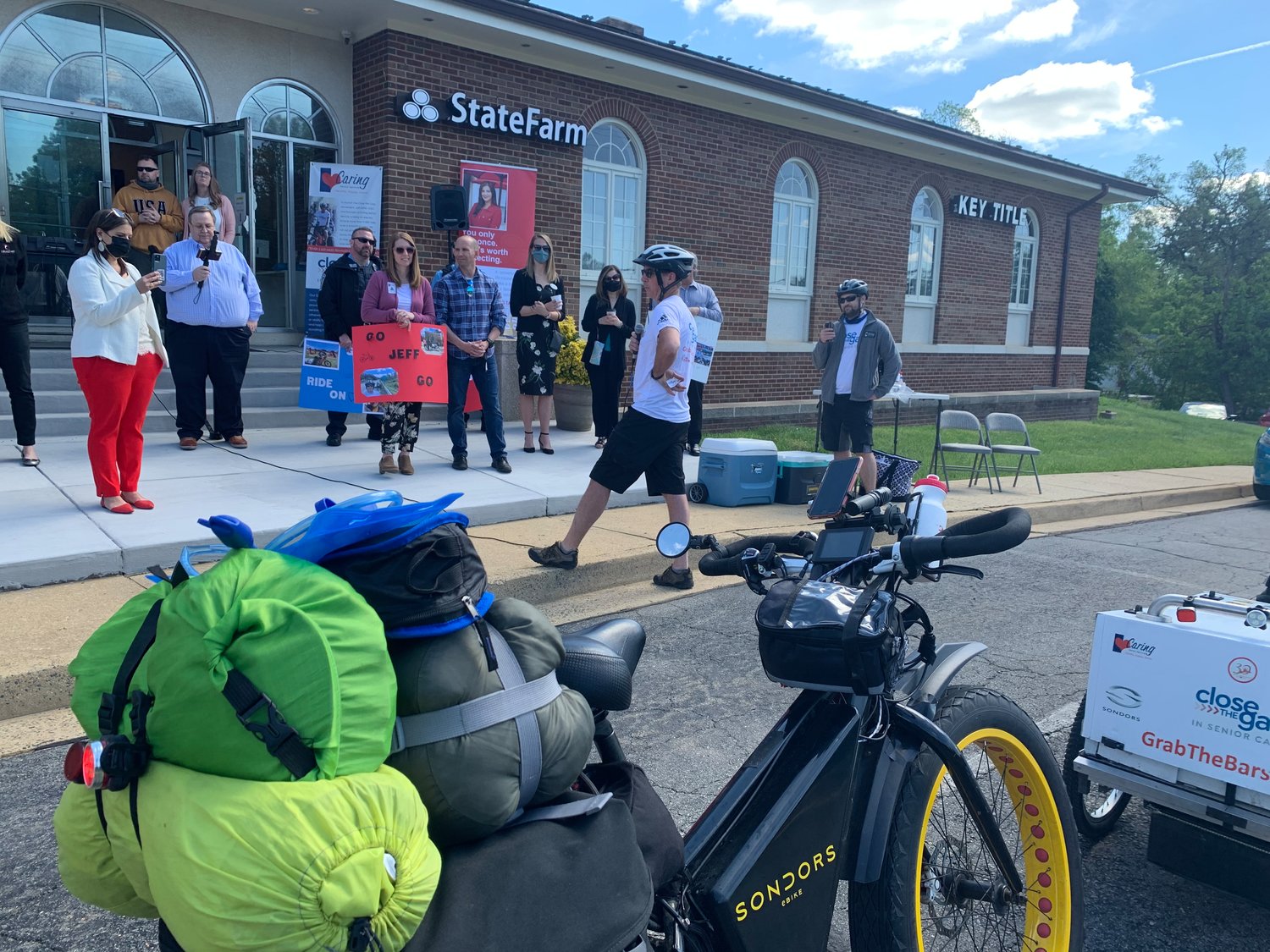 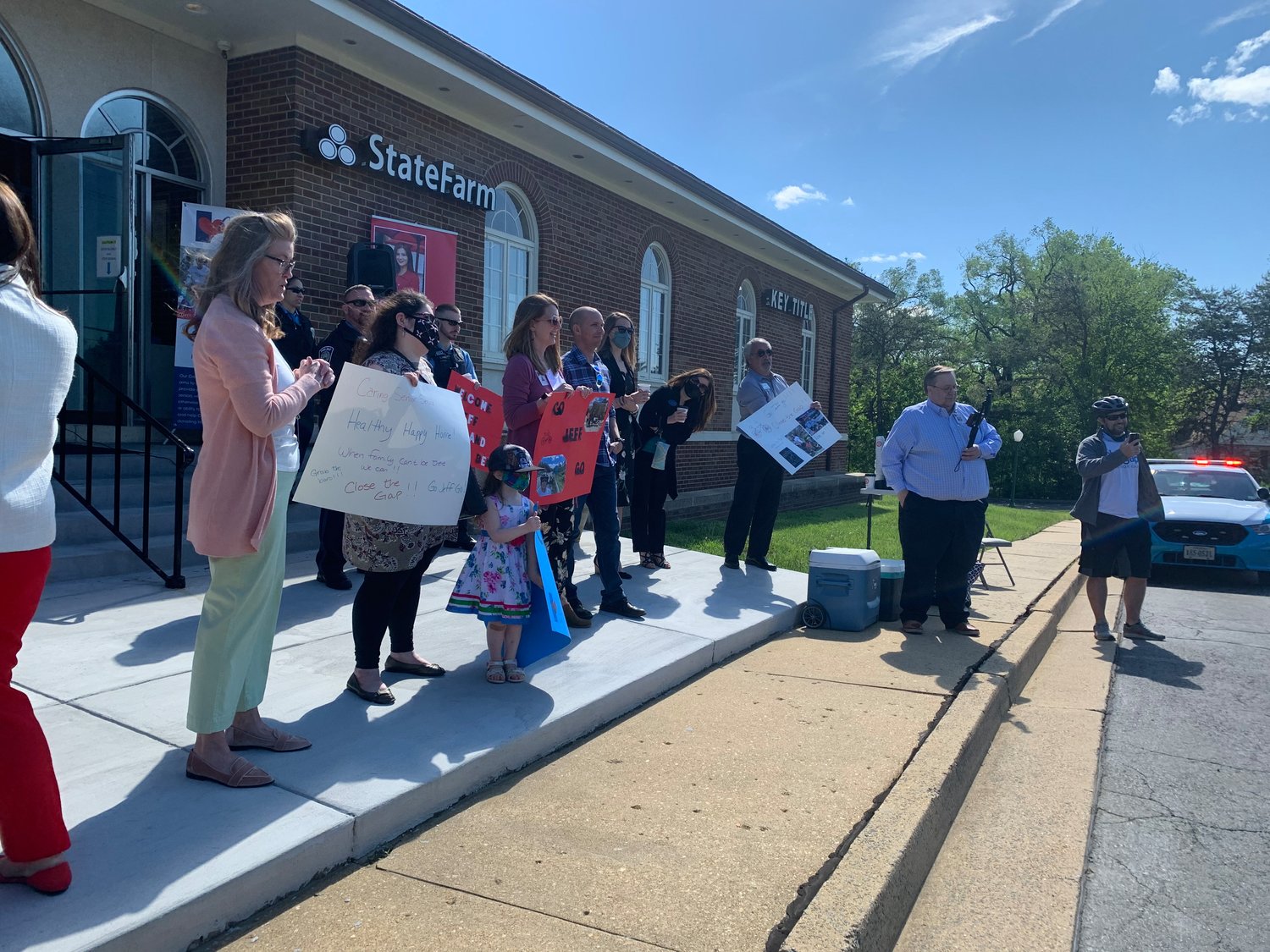 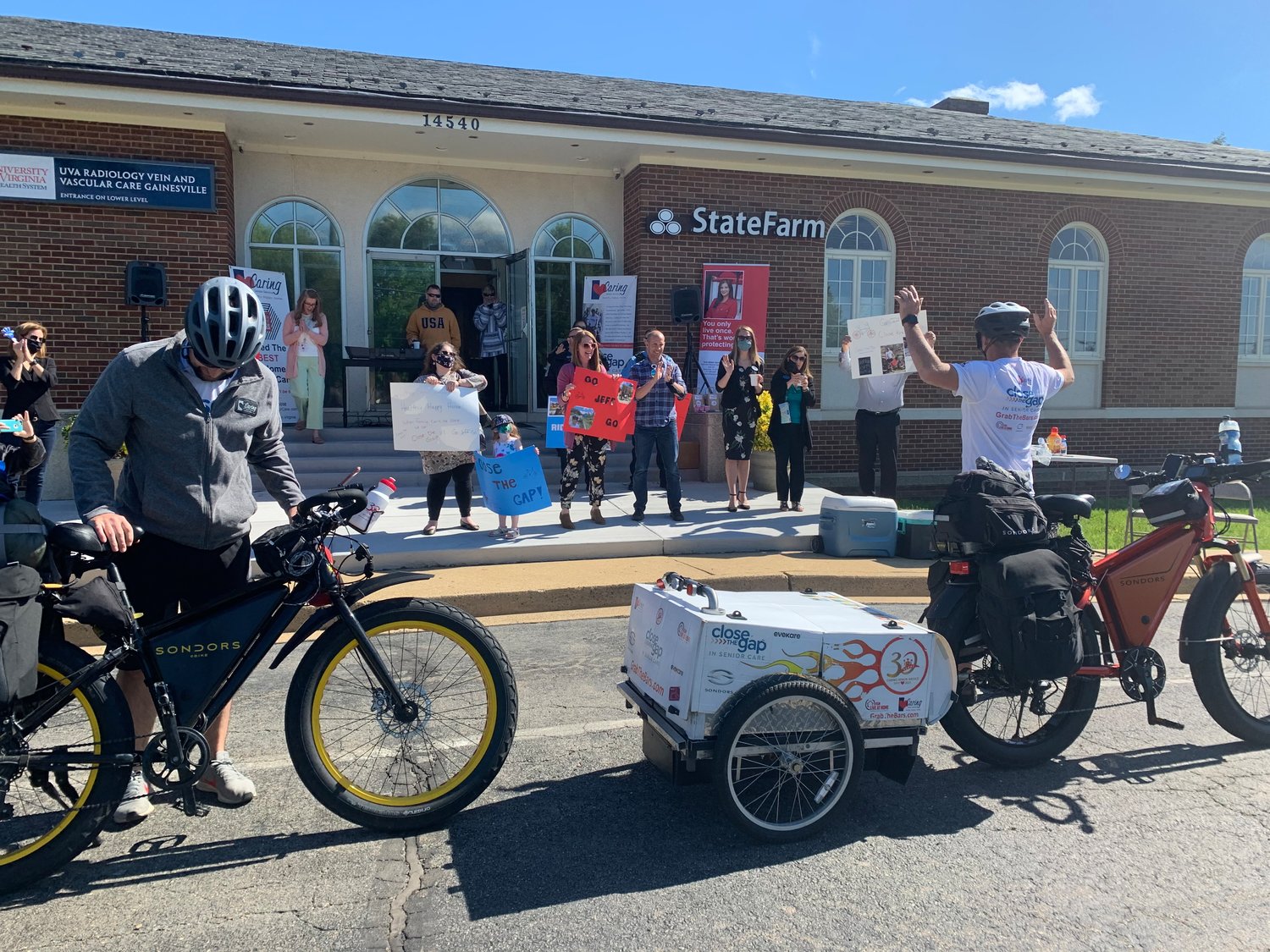 “It didn’t start out as that ‘heart tug,’ but it became that. I love what Caring does. I felt I could make a difference in the community.””
CEO Jeff Salter
Caring Senior Service of Northern Virginia
14540 John Mashall Hwy
Gainesville, VA 20155
View larger map
Stacy Shaw (Sponsored Post)

The “Grab the Bars” initiative aims to educate people on how bars installed in senior’s homes can save lives. Falls are the leading cause of serious injury among seniors. Every 11-seconds a senior citizen is treated in an emergency room for a fall. As 80% of those falls happen in the bathroom, installing grab bars in home bathrooms is a simple preventative measure.

The cross-country ride to all Caring Senior Service locations spreads awareness of the problem and also raised thousands of dollars to assist seniors residing in areas served by Caring Senior Services to purchase and install grab bars in their bathrooms. During the Gainesville event, the “Grab the Bars” fundraiser reached its $10,000 mid-way goal.

Donate here to Caring Senior Service's "Grab the Bars" fundraiser to help seniors afford safety bars in their homes, so they can age in place longer and avoid falls.

Wayne Mitchell runs the Northern Virginia franchise with an emphasis on caring, hiring quality staff and keeping close contact with the clients and families. Mitchell arranged for Jeff to be greeted by Prince William police officers, business professionals and friends, Caring Senior Service employees and local media to mark the event and to help raise awareness for the cause. Prior to arriving at the office, Jeff met with firefighters at the department along John Marshal Highway.

Jeff started Caring Senior Services when he was just 22. At 51, he decided to build awareness about falls via the across country ride. Sometimes we all need a little assistance; Jeff said he needed to the e-bike to make the ride possible. Although he had to train for the journey, he said he would never have attempted it via bicycle alone. He likened it to the seniors who accepts a little in-home help or installs a safety bar in the home.

The trip was a spartan endeavor. Jeff left his wife and two grown sons for the spring and summer. He rides 7-8 hours a day between locations, accompanied by two other riders. All his possessions fit into a small trunk towed by the bike. At night they often camped in a tent and cooked simply over a fire. He also needed to learn bike repair.

Jeff said the best part of the trip was “the randomness” of getting to meet so many people along the way.

He also enjoyed seeing the beautiful scenery of the country, and especially along scenic highways. He did not have much time for nightlife or to visit attractions as he had to make time between locations.

He said that where ever he went people warned him about the next place he was going. This time, people ribbed him about heading to New Jersey and Philadelphia. “I haven’t been to a state I haven’t enjoyed,” he said. By summer he will be riding through the dessert; he said that was poor planning on his part.

Jeff said it was a different year for in-home senior care. Many people felt their family members would be safer at home rather than in a nursing home. However, there is a need for more people to work in assistant living and with an aging population, he only expects that number will increase. People have to have that caring gene.

It is something that has changed him. “It didn’t start out as that ‘heart tug,’ but it became that. I love what Caring does. I felt I could make a difference in the community.” He said that being a CEO he moved away from the “day to day” operations, and he also sees the trip as a chance to reconnect. “Just to talk to the families about what we’re doing.”

Jeff praised Wayne for being a great franchise owner who always challenged him and gave him valuable feedback. After a long career, Wayne could have done almost anything, but said he chose to work for Caring Senior Service with “devotion and dedication.”

Jeff also thanked the people at Sondors for providing him with their electric bikes. He said he chose Sondors because they are really durable and safe. They are also affordable and come in a variety of styles.

For more information about Caring Senior Service of Northern Virginia contact the Gainesville office at 571-222-5050.

Watch YouTube Video of Jeff Salter on the Road