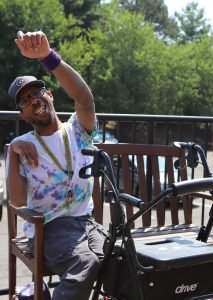 Ron is an enabled athlete who participates in races on team ServiceSource.

“People like us need to be in the community,” said Ron Lambert, a participant from ServiceSource’s Long-Term Community Integration Services program. When Ron was younger, medical professionals told him he would not live past the age of 14. Ron is now 47 and competing in his second race as an enabled athlete.

Ron embodies ServiceSource’s vision of supporting diversity. The Northern Virginia organization regularly participates in events throughout the community to cultivate and increase inclusivity – and they are at it again. ServiceSource has formed Team ServiceSource, to compete in the upcoming Novant Health UVA Health System Prince William Half Marathon & 5k on September 29, 2019, at Jiffy Lube Live in Bristow.

Team ServiceSource is currently leading the race’s competition for the largest team representation with over 50 individuals with disabilities, staff and community members registered.

The ServiceSource Team also includes four enabled athletes, two of which competed in the 43rd Marine Corps Marathon in 2018.

Ron said the race is important to him and he believes to other people with disabilities, “so everybody can have a chance at doing what they want to do.” 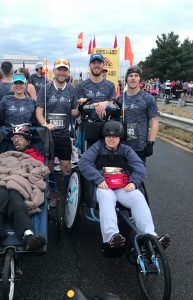 By including enabled athletes in events like the Novant Health UVA Health System Prince William Half Marathon & 5k, individuals with disabilities are provided an opportunity to engage and flourish in their communities, reminding us that we all have the right to pursue our interests and passions.

Together, ServiceSource is racing for inclusion!